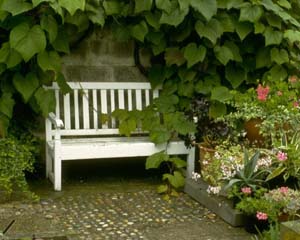 Now, this is one of my favorites! My brother-in-law, a
college professor, was seeing a famous allergist, who I’ll not name. He
tried to tell the allergist all about my book, Allergy-Free Gardening. The
allergist dismissed it all as unimportant and then told him, “You want to know
why there’s so much allergy nowadays?”

My brother-in-law said that, yes, he certainly did
want to know.

“Women’s Lib,” said the learned doctor. “Women
used to stay home where they belonged and they took care of the kids and kept
their houses neat and clean.

Now, well, now they all have to have jobs, just like
the men, and who’s taking care of the house? Nobody! That’s why
there’s so much allergy now. Their houses are filthy and covered with
dust.”

My brother-in-law wasn’t quite sure what to make
of that.

I have an answer for that doctor. An increase in house
dust isn’t driving the allergy rates sky-high. Not even close. What’s
gone up is the amount of pollen in our cities. In some areas, Tucson, Arizona,
for example, there is actually ten times more pollen in the air there now than
there was just thirty years ago! And I can document that.

It isn’t just Arizona either. In city after city,
north and south, all around the civilized world, everywhere that modern,
low-litter, litter-free, seedless, male landscaping has become popular, pollen
rates are up. Even though in many cities there is now less total green matter
than in the past, there is still more pollen than ever. And more allergy, too.

Not long ago I was out in my own neighborhood, camera
in hand, looking for some choice high-allergy landscapes to photograph. I
didn’t have to go far. I was standing, carefully, on the public sidewalk,
taking a close-up shot of some Groundsel bush ( Baccharis sp.) used as a ground
cover in this front yard. An older gentleman came out of the house, looked at
me and asked, “Now, what in the world could be worth photographing in my
yard?”

“This ground cover is all male,” I said. “All-male,
and all of it rather closely related to ragweed.”

“And that big row of junipers you’ve got there,” I
said, pointing to the side of his yard, “looks like every one of them is a
male, too. That ash tree of yours, notice how it doesn’t have any seeds?”

“It’s a male tree. Actually, your entire yard,
everything in it except that climbing rose bush on the front porch, all of it
could have been designed to cause allergies. Anybody here have allergies?”

“Sure,” he said, “my wife. She’s got terrible
allergies.”

I looked at the yard full of male ground cover, all of
it in full bloom. “Well,” I said, “I’d be willing to bet she’s having allergies
right now.”

Now, I didn’t even bother to ask him if his wife kept
their house spotless and dust-free. It was a nice house, in an expensive
neighborhood, and somehow I seriously doubted, that his wife’s allergies were
being caused by Women’s Lib.