How to make a Traditional St. Briget’s Cross 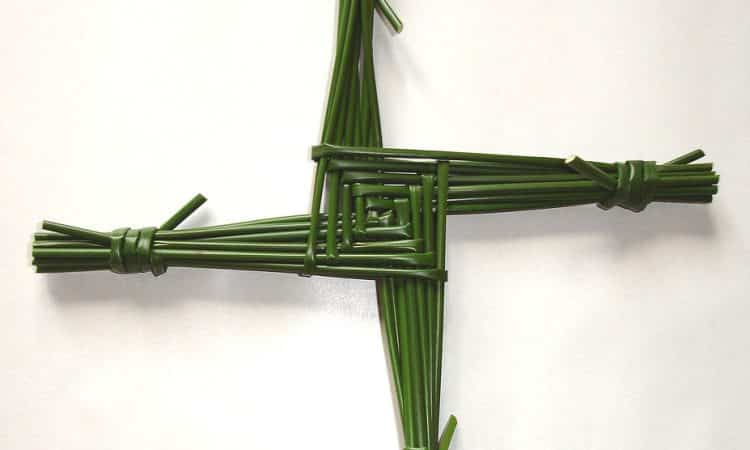 Below are three methods for making Brigid’s Crosses. Hopefully, one will work best for you. I have to give due credit to the Geocities domain for the source of this material. I just came back from Ireland and I hate to see this lost via the internet.

In Gaelic: Cros Bhrighite Rushes is the traditional material for the St. Briget’s Cross. All materials should be blessed before construction. If you use rushes be sure to keep them wet but not too wet as they will mold and rot. To avoid the mess  I  have found that ordinary plastic drinking straws left in their white wrappers are just fine. Use rubber bands to tie up the ends. I generally use 9 straws and 4 rubber bands, however, any number may be used.

Size does not matter. Generally, crosses are made from pieces of rush that are about 8-12 inches long. Some jewelers, however,  make them in the size of earrings.

After searching for many months I finally broke down and purchased across from the traditional  Irish-American gift shop. I took it apart and found the simple secret of the design.  The process does wonderful things for busy ingersand is great with storytelling!

How did you do?

Let me know send e.mail with your comments! Here   To the top!

This method produces a cross in a form which is much like the Eye of God and as such it brings to mind the antiquity of the Celtic Traditions
of Ireland.
Materials: Two sticks and either
rushes or wire or paper twist. Heavy gauge electrical wire (I use green!) makes for a great re-usable cross
which can be re-constructed for each session. I start the cross and pass it through the class audience or completion.

Ideally, there should be a few inches of stick remaining exposed on each spoke. It should resemble a cross more than an eye of god…


How did you do?
Let me know send e.mail with your comments! Here

This method produces a cross much like that of Method 1 For some reason this method seems to  be more Archaic than method 1.