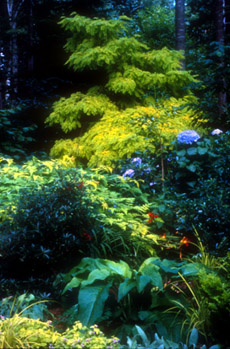 A properly planted, shaded garden possesses a charm of its own, with quiet harmonies of color that are so different in charac­ter from its sunny counterpart and at the same time it provides a cool refuge a retreat from summer’s glare. But limited sun­light is often viewed with rather mixed feelings by those endeav­oring to maintain’ a garden in shade especially if they happen to be trying to grow plants that will not do well there. Happily, there are many colorful and interesting plants that will. It’s important to have a clear understanding of the type of shade being encountered, for there is a great deal of difference between the heavy, almost total shadow cast by buildings and dense evergreens and the dappled shade of deciduous trees.

Other factors that have to be taken into account are soil texture, whether the site is damp or dry, and position. Thorough preparation is essential and humus in the form of leafmold or peat moss will benefit both heavy and light soil and should be incorporated during cultivation. Both may also be used as a mulch to conserve moisture and as a protective covering during winter. The addition of sand to heavy soil will improve the ‘texture as will a dressing of ” lime. However, in situations where the earth is naturally acid or where it has been made acid by the presence of none-bearing trees and some oaks, it is probably wiser to grow plants that will ‘stand these conditions than to try to change the nature of the soil by liming.

The question of location is as important in establishing a garden in the shade as it is under normal light conditions, and it follows that a north or east exposure will be more difficult to manage than one facing south or west. Draft pockets, created by buildings, etc., can also create problems, although the planting of shelter belts of hardy trees or shrubs, or the erection of a wall or fence will often do much to improve these rather inhospitable situations.

When contending with deciduous trees, the advantage may be taken of the period before the leaves become fully developed in spring to stage a grand slam display by using spring-flowering bulbs. This is especially sensible if you plan to be away during the summer. Tulips, hyacinths and daffodils are amongst the easiest to grow and most colorful. They should be planted in the fall, and by careful selection of varieties, the flowering period can be greatly extended.

Not quite so spectacular but highly suitable are grape hyacinths (Muscari), glory-of-the snow (Chionodoxa), lily-of-the valley (Convalaria), and both Spanish and English bluebells (Scilla). With the exception of tulips and hyacinths which tend to bloom less each year, the other bulbs may be left to flower year after year and many will multiply some by natural bulb division and others by seeding. The display can be continued with summer flowering shade-tolerant annuals planted between the bulbs or groups of bulbs, or used as a total planting where the bulbs have been dug. Impatiens, baby-blue eyes, (Nemophila), and flowering tobacco (Nicotiana) may be sown where they are to flower or raised inside and planted as soon as weather conditions permit. Treated in this way, wax begonia, Lobelia, Torenia and Fuchsia are highly successful. Where there is sufficient moisture, the delicately marked leaves of Caladium will provide color until frost.

Before planting or sowing is attempted, the ground must be well cultivated, taking care not to damage bulbs remaining in the ground. For those who do not want the bother of seasonal displays, there is a wide selection of perennials, including marry native plants. However, the importance of providing fertile soil plus adequate moisture cannot be overemphasized if satisfactory, results are to be achieved.

For spring and early summer display where shade is not too intense, the following low-growing plants will quickly become established, and, because of their spreading habit, make excellent groundcovers.

Wild blue phlox (Phlox divaricata) is a hardy native with large heads of light blue flowers. It looks particularly handsome in association with rock and is excellent for fronting a border display. Multiplication is rapid.

Barrenwort (Epimedium) has delicate bronze-green foliage, which is a perfect foil for the dainty clusters of flowers in spring.

Slightly taller subjects, both from North America and suitable for the border, rock garden or for natural planting are the Virginia bluebell (Mertensia); with drooping, tubular blue flowers; and Jacob’s ladder (Polemonium) that also has clusters of blue flowers. Both grow to about 2 feet and are easily raised from seed. An unusually early bloomer is the Christmas rose (Helleborus niger) that produces white, butter-cuplike flowers from December to March. Following a little later is the Lenten rose (H. orientalis) with green and purple blossoms. They require a sheltered position and, as a precaution against the petals being marked by rain or snow, they should be protected with sheets of glass or plastic.

In light shade, the day-lily (Hemerocallis) is most accomodating, flourishing in both dry and damp situations. A tenacious grower once established, it requires very little attention. The lily-like flowers are mostly in shades of yellow and orange. The long thin leaves are also an added attraction, and because of their dense growth tend to smother out weeds. Another spectacular early summer flowering perennial, which grows best in moist ground, is Astilbe. There are several varieties with colors ranging from white to pink, red, salmon and purple-red. The plume-like flowers are carried well above the handsome foliage.

Often associated with old-fashioned gardens, the bellflower (Campanula) offers a wide range of height and form. Of the low growing types suitable for rock gardens or in front of taller plants, the Carpathian bellflower (C. carpatica) in its several varieties and shades of blue and white the wall hairbell (C. rapunculoides) whose matted growth is covered with dark blue flowers all summer; and the Poscharsky bellflower (C. persicifolia) with violet-blue flowers and its white variety, are excellent for borders. The balloon-flower (Platycodon) is also very popular but it dislikes being moved because of a long fleshy taproot.

For those who wish to include at least one aromatic plant in their collection, the hardy North American beebalm (Monarch) will fill the bill. This easily grown member of the mint family produces loose heads of red flowers on 2-foot stalks and is particularly attractive when massed against a dark background.

For areas of deeper shade, there are a surprising number of perennial plants that can be relied upon to give a good return. Some favorites for spring color, having whimsical common names; are bleeding heart (Dicentra eximia), squirrel-corn (D. canadensis), and Dutchman’s breeches (D. cucullaria). In each case, the dainty light green foliage combines well with the nodding heads of bloom.

Another group of perennials with attractive but much larger leaves are the plantain lilies (Hosta), of which there are several interesting ‘species. All give of their best where the ground is moist, producing white or blue flowers on long spike-like stalks during the summer. The’ fern-like foliage and equally graceful flowers of meadowrue (Thalictrum) are always a pleasing sight. There are several species available all hardy and useful for border planting.

Although they do not produce flowers, ferns are ideally suited for deep shade. Their lacey foliage makes them ideal companions for many flowering plants, or as lone groups in the wild garden. The American hair fern, lady fern, hay scented fern, Dryopteris filixmas (the imposing broad fronds reach a height of 2 feet), cinnamon fern, Christmas fern, and the ostrich fern (also with tall imposing fronds), all thrive in a deep, woodsy soil, requiring plenty of moisture at the roots during the summer and they benefit from a top dressing of rooted leaves in spring.

To complete the framework of shade planting are the’ more permanent shrubs and trees. Some, such as azaleas, rhododendrons and hydrangeas, have colorful flowers to recommend them, while others, including hollies and yews, are grown mainly for their attractive evergreen foliage. The ground should be well prepared prior to planting, which is best done in autumn or spring. Newly planted shrubs and trees require ample water until well established, and the roots may be protected with a mulch of peatmoss, wood chips or wheat hulls.

There are a wide variety of shrubs to choose from and the following represent only a few of the more popular ones.

Three hardy native shrubs, all for spring display in light shade, are Juneberry (Amelanchier), with masses of small white flowers followed by small reddish purple berries; redbud (Cercis), producing quantities of pink pea like flowers, and which, like the Juneberry, reaches the dimensions of a small tree under favorable conditions; and the less vigorous Carolina allspice (Calycanthus) whose reddish-purple flowers have a pleasant spicy odor. Another interesting shrub, the Japanese quince (Chaenomeles), can be highly recommended both for the clusters of spring flowers in various shades of red, pink or white, and the large, spicey scented, quince like fruits that appear later and which can be, made into jelly.

A very popular small tree that needs little introduction is the flowering dogwood (Corpus florido), whose creamy-white flowers light up our woodlands in spring. Also, equally beautiful, is the pink variety. Other members of this group worthy of mention for positions in semi-shade are the Cornehan cherry (C. mos), with masses of small yellow flowers appearing before the leaves in early spring, and the tartarian dogwood (C. albs var. sibirica), grown for its red stems that are especially showy against the show.

A -shrub worth growing for the vivid red autumn coloring of its leaves and the interesting Corky, wing-like flanges of its bark is the winged euonymus (E. alatas). Another showy member of this group is the purple-leaf wintercreeper (E. fortunei var. coloratus) which makes, an excellent groundcover. The leaves take on an attractive shade of purple with the coming of cold weather.

Also worthy of a place in any garden, if only for its fragrance, is the honeysuckle. (Lonicera). There are a number available of both climbing and shrubby habit all easy to grow.

Perhaps the most popular of the flowering shrubs are the rhododendrons, which include azaleas. Given a deep, moist, woodsy soil, they will thrive in shade and are ideally suited for informal planting. One of the first to flower is the lovely royal azalea (A. schlippenbachi) with large, single flowers in a delicate pink on a 5 to 6 foot deciduous plant. More recently available in this country are the famous Knaphill hybrids that come in a wide assortment of colors. The hardiest and most reliable of the evergreen section is the native rose bay rhododendron (R. maximum). It will thrive even in areas of deep shade. In recent years many rhododendron hybrids have become available so that gardeners who admire these plants should keep an eye out for new introductions that will serve their particular needs.

These are but a few of the host of plants that will thrive under conditions of limited light. A little forethought prior to planting will avoid disappointments later on and go along way to creating the effect you have in mind. And this holds true whether your concern is for several acres of a woodland garden or a few square yards of a shaded patio or along the side of a house or other building.