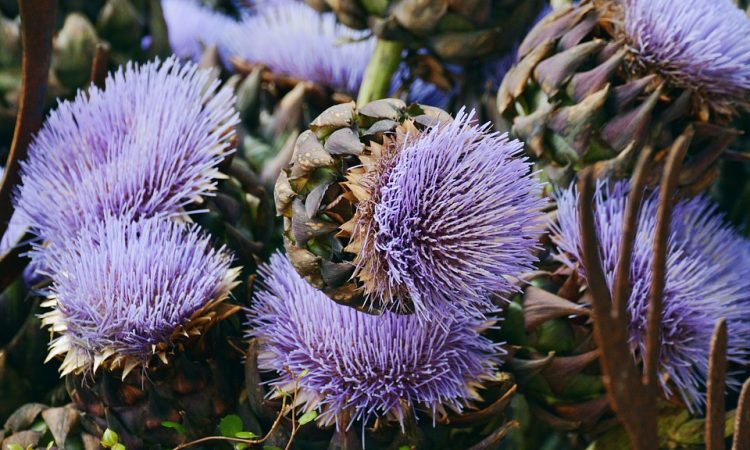 The Chinese Artichoke is a hardy perennial plant with creeping roots, swollen at the ends into spiral-shaped edible tubers, 1-4 in. long, and erect, square stems 9-15 in. high. The Chinese Artichoke will thrive in the open garden in ordinary soil but is little known in the United States. The botanical name of this vegetable, which belongs to the Mint family, Labiatae, is Stachys Sieboldii. It is a native of northern China.

In early spring the tubers are set 3 in. deep and 9 in. apart in rows 18 in. from each other, in the ground that has been lightly manured. Beyond keeping the surface hoed and watering during drought, no other attention is required. When the foliage has died down, the tubers should be lifted as required, for they will not keep if exposed to the air.

Tubers required for replanting in spring should be lifted in autumn, but they must be stored in sand or sandy soil in boxes in a cellar or similar place.

This is a vigorous, thistle-like perennial, 3-4 ft. high, with coarse leaves and stout stems bearing large, terminal, fleshy flower heads. The Globe Artichoke may be propagated from seed, division or suckers. The last-named method is the one usually employed. The plants are not generally hardy in the North, although with adequate protection they can be wintered outdoors even in southern New England. They are not commonly grown except in California. The botanical name of the Globe Artichoke is Cynara Scolymus. This vegetable belongs to the Daisy family, Compositae; it is a native of southern Europe and northern Africa.

The soft, fleshy receptacle of the flower head and the thickened bases of the flower scales are the edible parts; they are sometimes eaten raw but are usually boiled. The blanched stems and leaves may also be used.

Preparing the Ground for Planting

The ground must be deeply dug and moderately manured; a dressing of two parts superphosphate of lime and one part sulphate of potash, at the rate of 4 oz. to the square yard, should be raked in a week before planting. The sunnier the position for the plantation the better; full exposure to sunshine is necessary.

When to Sow Seeds

Seeds may be sown in early spring in the open ground, groups of two or three seeds being set 2-3 in. apart in rows 15 in. from each other. The seedlings are thinned to 12 in. apart in the rows and left undisturbed until the following spring, when they should be planted permanently. Seeds may also be sown in a greenhouse, temperature 55 degrees, in pots filled with light, sandy compost, in February. When the seedlings are an inch high, they are potted singly in 4-in. pots filled with equal parts of sandy loam and leaf mold; they are kept in a cold frame until the weather is warm and settled, they are planted in the open 3 ft. apart in rows 4 ft. from each other.

Plants from this sowing will produce flower heads late the first year. Seeds often produce many useless plants which are not discovered until the flower heads appear, while suckers reproduce the same type of plant as the parent.

Globe Artichokes of proven quality are best grown from suckers which should be 6-8 in. long and cut from the plants with root and soil attached in early spring. They are planted 3 ft. apart each way. In cold districts, it is wise to pot up a few suckers in autumn and winter them in a frost-proof cold frame.

As growth advances, small flower heads should be removed as soon as they appear—they may either be eaten raw or cooked; the large heads—cut when half-grown—are best boiled. The flower heads must not be allowed to mature fully or they will check further development and so reduce the crop. Watering is necessary for dry weather, and a mulch of manure on the soil is beneficial.

In fall, after frost, all flower stems are cut down close to the ground, a box or basket is inverted over each plant and is covered with leaves or similar protection. The covering is removed in the following spring.

This is a hardy, tuberous-rooted perennial with erect, annual stems, 5-8 ft. high; it is grown as a vegetable for the value of the tubers or swollen underground stems. The Jerusalem Artichoke will thrive in almost any soil and position but it does best in deeply dug soil in the open garden. Its botanical name is Helianthus tuberosus, and it belongs to the Daisy family, Compositae. The name is a corruption of the Italian girasole, sunflower; the plant has nothing to do with Palestine, but is a native of North America. It was cultivated as an article of food by the Indians.

When to Plant. The tubers are planted in early spring. Whole or cut tubers, the latter each having two or three buds, are set 4-5 in. deep and 10-12 in. apart in rows 3 ft. from each other. During the summer months, the soil must be kept free from weeds.

When the Roots Are Ready for Use. When the leaves turn yellow in autumn the tubers are ready for lifting. They are best left in the ground and dug as required. Every piece of the root should be cleared, for any that remains will grow and maybe a nuisance the following season. Before the ground freezes solid, the remainder of the crop left in the ground is dug and the tubers are stored indoors in the sand; when growth starts, the tubers turn black and are useless for cooking.