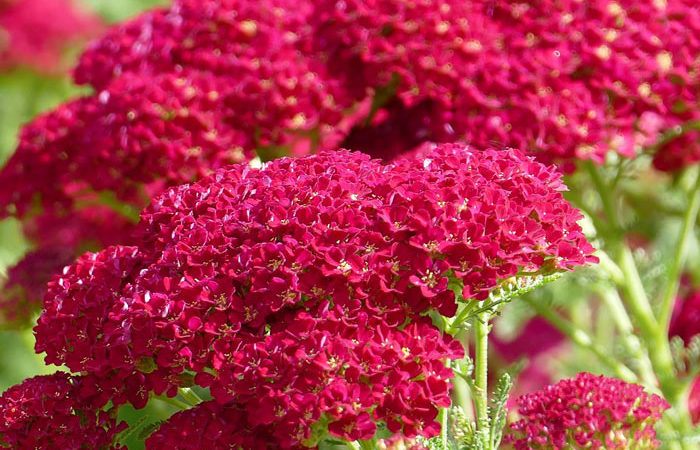 The Achilleas have proven themselves some of the most desirable plants for the garden, mainly because of their exceedingly free, yet graceful habits of growth. They range in color from white to cerise, pink and yellow, and are often combined with silvery white foliage.

The species Achillea Plarmica flore-pleno, The Pearl, has double flowers borne in dense heads of purest white. It somewhat resembles the pompon Chrysanthemums. Boule de Neige is not quite as large as The Pearl, but the centers of the flowers are fuller and this makes it appear of purer color. Perry’s White has much larger and more compact blooms than The Pearl, some of the flowers measuring 1 inch across.

A. Millefolium is the common Yarrow, but its variety A. roseum has handsome pink flowers and feathery foliage.

The Wooly Milfoil (A. tomentosa) and the Golden or Fern-leaved Yarrow (A. Filipendulina or Eupatorium) are yellow flowered sorts; the former grows but a foot tall, the latter attains a height of 4 to 5 feet.

UTILIZE. All of the Achilleas are good to use as cut flowers and for the border. The Pearl is especially good in cemeteries because it takes care of itself in the grass. They are often used in landscape work against a background of shrubbery and some of the dwarfer types are used in rockeries.

GENERAL. They are very easy to grow; in fact they grow so rapidly that the plants should be divided and reset each Spring. Any soil will do although they thrive best in rich, well watered soil where plenty of sunshine is available. Some of the taller Yarrows need a little support. This is best given by sticking a few twiggy branches into the soil, in which case the stems of the Yarrow are held up nicely.

PROPAGATION. If the seeds are sown early, the plants will bloom the first year. The large flowering clumps should be divided either in the Spring or Fall.