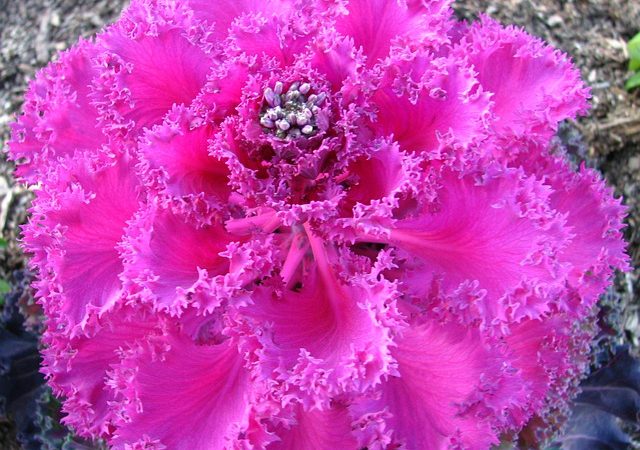 The November weather this year has been so relatively balmy that roses are still blooming in protected corners of many yards. The last of my cosmos kept going until ten days ago, having bloomed continuously since May. The cosmos petered out about the same time that I gave up deadheading them, so I felt no guilt whatsoever about yanking them out and consigning them to the compost pile. I will plant bulbs in their places, having loosened the soil nicely in the yanking-out process. Multi-tasking is a wonderful thing.

Now as I walk around my neighborhood I am seeing lots and lots of ornamental cabbage and kale, which have come to dominate the flower beds now that the warm season annuals are gone. Descended from food crops, they are perfect plants for late fall, the season of harvest. They can withstand several hard frosts without flagging, and even after that, in late winter, they have a certain sculptural quality.

For those interested in the distinction, ornamental cabbage has flat, showy leaves, while ornamental kale has frilly, showy leaves. Both have rose-like central leaf clusters in shades of white pink, purple and green, surrounded by darker green leaves. Some garden centers refer to all of these plants as “flowering” kale or cabbage, which is a misnomer. All cabbages and kales, whether ornamental or not, flower eventually, just like teenagers. Ornamental varieties are bred for their showy leaves, rather than for the relatively insignificant true flowers that appear later on slender stalks that rise above the foliage.

Cabbages are members of the Brassicaceae family that also includes nutritious vegetables such as broccoli and cauliflower that have been loathed by generations of children. The family is of Mediterranean origin but is apparently highly adaptable. Over the course of history, it has insinuated itself into locales from Nome to Rangoon.

I set out to find out how ornamental cabbages came to be so ubiquitous in our midst, and I discovered that the United States Department of Agriculture was responsible. In 1929 the Department sent a man named Howard Dorsett to Asia to seek out new plants. He came home with ornamental kales, which were greatly prized in Japan. These were introduced by seed merchandisers in 1936, and they have been fall fixtures in back and front yards all over America ever since.

Most people would no more eat the leaves of ornamental cabbage than they would eat the leaves of conventional cabbage, (unless it is fermented into sauerkraut and presented as part of a Reuben sandwich, or served up with lots of butter and alcoholic libation on St. Patrick’s Day). However, the leaves can be used as a garnish, and eaten if you are desperate. Taste as well as color are said to deepen as colder weather comes on.

If you have the sunny space, next year you may want to try growing your own ornamental cabbage from seed. Park Seed offers four varieties: Cabbage Color Up Improved Hybrid, a mixture; Kale Red Feather; Kale Nagoya, available in red, rose, white or as a mixture; and Kale Peacock Hybrid, extra compact plants with red or white centers. Apparently, when it comes to ornamental cabbage, the Japanese are still way ahead of us, with many different varieties from which to choose.

Seeds should be sown in early summer so that plants will be ready four to six weeks before the first fall frost. Gardeners with enough space sometimes sow the seed in a special bed, then transplant the mature cabbages to locales where their decorative properties will be appreciated. Some people put them in window boxes, and zealous flower arrangers sometimes even bring them inside for use in “pot et fleur” arrangements that combine cut flowers with potted plants. If you bring a flowering cabbage indoors, treat it the same way you would a Siberian Husky dog–house it out of direct sunlight, preferable in the coolest place available. The cabbage will last longer.

Ornamental cabbage takes up the decorative slack between the end of hollyhock time and the beginning of the holly season. Internet gardening authority Jo Ann Graham says that under normal outdoor conditions in temperate climates, the cabbages should hold up until after Thanksgiving. She adds, “when the plants smell like cooked cabbage, it is time to pull them out!”

I guess that is when the difference between a rose-like cabbage and a cabbage-like rose becomes abundantly clear.