Grow Poinsettias for next Christmas 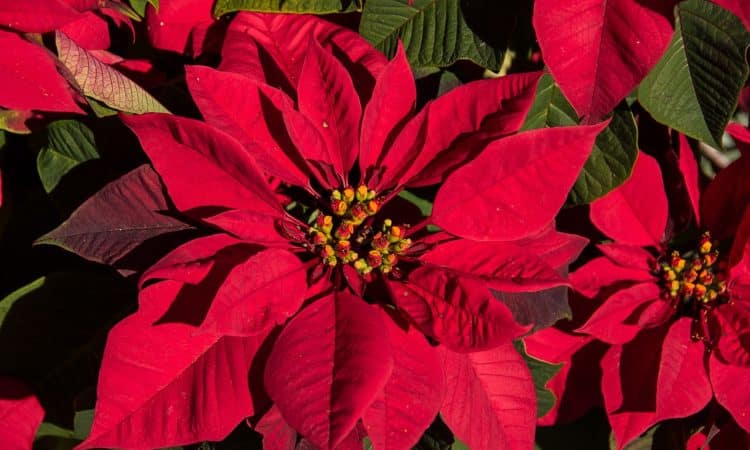 The real gardener derives his satisfaction from his ability to nurse plants along every step of their growth to their ultimate flowering glory. However, the greatest thrill is enjoyed by those who have succeeded in coaxing bloom from one of the plants considered difficult for the average gardener. Such a plant is the poinsettia (Euphorbia pulcherrima). Actually it really isn’t hard to grow, even though it can be temperamental.

There is one feature about this traditional Christmas flower that sets it apart from many other holiday flowers. Barring neglect or accident, it will always be in full bloom for Christmas in the latitude of New York City without the gardener’s having to resort to any special treatment, provided the plant does not receive any light in addition to natural daylight.

The two most important factors in the successful flowering of poinsettias, and those, which make it temperamental, are temperature and humidity. The temperature must be as uniform as possible and must never drop below 60°F. The humidity should be kept high-60 to 70 percent. This is higher than it is possible to maintain in the average home so extra provisions may have to be made such as setting the pot on a tray filled with moist coke. Of course, if you have a greenhouse, which you run at 60°-65°F., the problem is much simpler.

Poinsettias are grown from cuttings. These are taken from stock plants, which are carried bone, dry over the winter. These can be plants you get from your friends at Christmas. Place them in a dark, cool cellar where they will dry out and become dormant. Watch out for mildew while the plants are dormant; if it shows up as a white or brown powder, dust with sulfur. In April cut the plants back to a point just above one of the dormant buds on the stem.

Repot in new soil, water thoroughly, and place in full sunlight. I use the same soil for all stages of poinsettia growth, made up of equal parts of compost and sandy topsoil sifted together with several handfuls of superphosphate added to each bushel of mixture. I add a shovelful each of sand and peatmoss to each six shovelfuls of the first mixture.

A better practice is to wait until late July or early August to take cuttings, and then, after the rooted cuttings are 6 to 8 inches tall, they can be potted up (three to an 8-inch bulb pan) and grown without any pinching.

There is no trick to preparing cuttings. Cut the tip 4 to 6 inches with a sharp knife. A white, sticky juice will exude from the cut ends, but if the cuttings are immediately dipped in a root hormone powder and placed firmly in moist rooting medium, they will suffer little setback. Many rooting media are recommended for propagating poinsettia cuttings, but I have had the best success with washed mason’s or builder’s sand.

Before long new growth will appear and cuttings may be taken any time after the shoots are 6 inches long. The earlier the cuttings are rooted the taller will be the blooming plants. Cuttings taken any time up to the middle of June should receive a soft pinch-removal of the top half inch of terminal growth-when the plants are about 1 foot high. In no case should plants be pinched after the first of September or the resultant new growth will be too short to make a well-shaped flowering plant. Each of the two or more shoots developing from the soft pinch will produce a flower, but obviously the more flowers per plant the smaller each will be. The taller plants produced from early cuttings also have a bad habit of losing their lower leaves.

The first two weeks are the most critical in the life of the poinsettia. It is here that the high humidity is needed to prevent leaf wilt. Some growers invert large glass jars over the cuttings, but I prefer to keep the cuttings uncovered in a propagating bench in the greenhouse, automatically watered from below.

The cuttings should be removed when a good root system has developed and then the plants should be firmly potted in 3-inch pots. While the plants are getting established I like to bury the pots up to the rim in sand kept moist by the same system used in the propagating bench. Another method I have used to obtain the same moist conditions is to place the pot containing the plant in the next-sized pot and filling the space between the pots with sphagnum moss. If the moss is kept damp the plants will never dry out, nor will they be water soaked. You can also bury the pots outdoors in a protected and partially shaded spot in the garden, but check ever so often to see that the roots do not grow through the drainage hole.

As soon as more roots have developed, shift to a 4-inch pot, or use three plants to an 8-inch bulb pan. I believe poinsettias, like many other vigorous growing shrubs, bloom better when pot-bound; so I make this final shift by the middle of October and keep the amount of new soil added down to a minimum. Extra food can be supplied by using your favorite liquid or dry plant food at biweekly intervals after the plants are established in their final pots.

Tall plants will require staking and tying to keep the stems straight, but even the smaller plants will be shaped better if, small bamboo or metal stakes are placed alongside each stem. Either pieces of pipe cleaner or paper-covered wire plant ties can be used to tie the stems to the stake.

If you have grown your plants outdoors all summer, bring them in the house early, before the temperature drops below 60° F, and while the air in the house is still quite humid. Use. a watertight, coke-filled tray with the pots resting on a platform above the coke to increase the humidity about the plants. Better still, if you have a special room for houseplants with a good sun exposure, purchase a fan-type humidifier and you will find the air more healthful for both the plants and your family.

By the first of December the top leaves will begin to turn red. Incidentally, the red leaves are not the flowers, but are merely colored leaf bracts, which surround the tiny flowers. Also, while red is the traditional poinsettia color, they may be had in white or pink. After Christmas, withhold water gradually and start the cycle again.
By D. Leeth