Moles and Voles and their controls 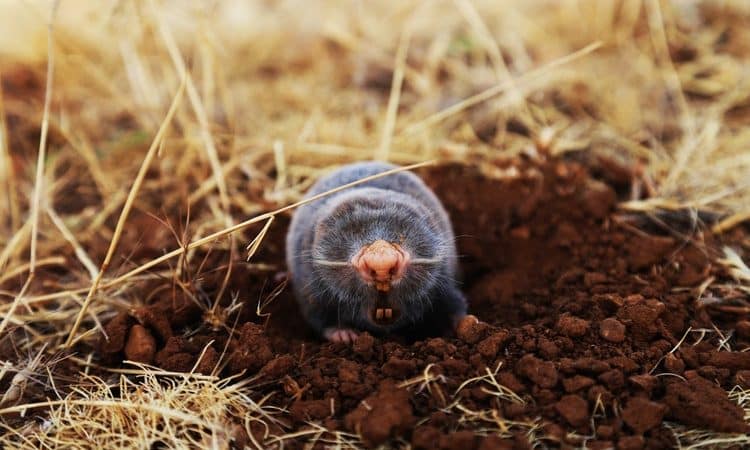 These two garden critters have similar names, and even may look similar at a quick glance, but they really are quite different.  Knowing something about these garden pests—what they eat and where they live—may help in their control.

Both these critters resemble large furry mice, but moles are quite distinctive with their large, paddle-shaped front feet with claws.  These are designed for digging their characteristic tunnels in lawns, as is their whole body.  Their small eyes and ear openings (they have no external ears) are hidden in their fur.  Their hair is short and, offering no resistance, allows them to move forward and backwards in tunnels.  Their bodies are four to six inches long.

Moles can dig with a force of 32 times their body weight, and dig surface tunnels at a rate of 18 feet per hour.  They then can travel in these tunnels at up to 80 feet a minute.  They make surface tunnels for feeding, and deeper tunnels to unite the feeding tunnels.  These deeper tunnels have characteristic mounds or volcanoes of soil at the end—a sign you have moles instead of voles.

What moles are digging for is food—insects, grubs, and earthworms. In addition to the mistaken notion of many that moles and voles are the same, is a false belief that moles are eating plants.

By eating insects, moles can be helping to prevent insect outbreaks.  It is some consolation though when one’s lawn is riddled with tunnels, though, to know they are eating the grubs.  Many try to control moles by using pesticides to control the grubs.  This may not help, however, as it forces the moles to eat more earthworms that you actually want in your lawn, gardens, and flower beds. So even if not to prevent the tunnels, you may want to control moles to prevent them from eating all your earthworms.  A five-ounce mole can consume 50 pounds of insects and earthworms a year!

There are some commercial repellent products, and even more home remedies, to control moles.  More common examples of these are mothballs, vibrating posts, ultrasonic devices, and castor oil solution. Many of these seem more annoying to humans than moles, and are often of little effect.  Poison baits are not recommended as they can be quite toxic to non-target organisms (humans, pets), and work their way into the wildlife food chain.

The best control seems to be traps.  I use a mouse snap trap, baited with peanut butter, and placed at the opening of an active tunnel.  I then cover the opening and trap with a clay pot, which is attractive, keeps other critters out of the trap, and makes the mole think the trap is in the tunnel.  Other trap types may be used such as harpoon and scissor-jaw.  Just make sure and follow directions when using these.  Traps are most effective in spring and fall when moles are most active.

Shrews are related to moles only they’re smaller, three to four inches long (one will fit into a tablespoon), with a pointed snout, dense fur, and small eyes.  They, too, eat insects both above ground and in tunnels made by moles and voles.  They don’t create tunnels themselves.

Voles often are called meadow mice, as they resemble mice with shorter tails.  Adult voles have chestnut brown fur, mixed with black.  These rodents are about the same size as moles but have easily seen large black eyes, small ears, a blunt face, and noticeable orange teeth used for gnawing plants. They don’t hibernate and are active day and night.

They, too, make extensive tunnel systems.  They tunnel under the snowpack in winter, leaving those above ground channels in lawns that you see in spring when the snow melts.  Near tunnels and openings you often can find non-uniform gnawing of plants (girdling) in irregular patches. This may be above or below the soil surface, and may result in roots eaten, and perennial plants heaved out of the ground.  Obviously such plants are weakened, if not outright killed, by such feeding.  Although voles mainly feed on stems and seeds of grasses, they will feed on most ornamental plants too. They’re mostly found in grassy and weedy areas.

Vole control is similar to that of moles.  I have found that keeping attractive (to them) organic fertilizers away from plants in high vole areas tends to reduce their damage.  Such fertilizers may be, or contain, bone meal, cottonseed meal, and similar strongly smelling products. Other least toxic approaches to vole control include keeping gardens weeded, and grass mown, thus removing habitats.  Similarly, keep snow away from bases of favored trees and shrubs, and avoid mulching too deeply.

You also can put tree guards around trunks of young trees during winter.  These will keep rabbits from chewing on bark too.  Just make sure that the guards are removed in summer if they’re the solid plastic type, and can expand as the trunk grows in girth.  Hardware cloth wire mesh makes a good trunk guard.  Make sure guards extend above the snow line.

Registered repellent products may be tried as part of a control program.  Products containing thiram (a fungicide) or capsaicin (the hot substance in chili peppers) are sold for vole control.  Just make sure to follow all label directions and precautions when using.

You can learn many more details about these garden and landscape pests, their biology and control, from Penn State University Extension leaflets (extension.psu.edu/identifying-moles-voles-and-shrews).

MOLES AND VOLES, AND THEIR CONTROLS