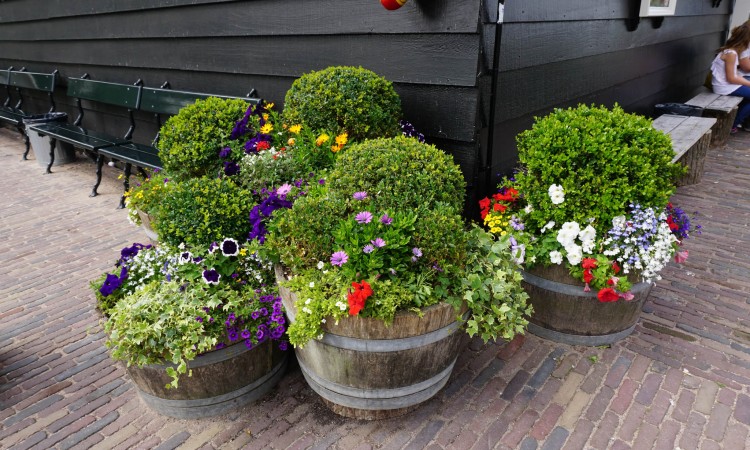 The growing scarcity of building land, particularly in towns and suburbs, with the accompanying shrinkage in the size of plots as prices continue to rise, poses difficult problems. Making a worthwhile garden in such restricted areas requires a` good deal of careful forethought. In fact, the proverbial pocket-handkerchief plot has almost become a reality, and this at a time when interest in gardening has never been greater.

Where space is really limited, there is only one answer. Design and planting must be scaled down to fit the area available. But gardening on this reduced scale can be just as rewarding. In these pygmy plots, the opportunity for healthy exercise may be lacking, but to many gardeners, especially the elderly and those who prefer to ‘potter’, this may not necessarily be a great disadvantage.

Miniature gardens can take a number of forms. In the very small plot, you can share the pleasures of those who work on a broader canvas by restricting your planting, not only to single specimens of your favorite plants, but also by growing those that are compact in habit with a slow rate of increase.

The miniature garden proper, however, will not be able to rely on such measures. For its impact, it will have to depend mainly on dwarf plants, some of which may be miniature replicas of their taller counterparts while others will display their own individual characteristics.

A good way of getting horticultural quarts into pint pots is to garden in sinks and troughs. Several of these plant containers, each with its separate planting scheme, can be accommodated in a minimum of space. Many a town forecourt, backyard or balcony could benefit from the inclusion of a feature of this kind.

Unfortunately, genuine stone troughs and sinks are fast becoming collectors’ items and, in consequence, increasingly difficult and expensive to come by. The stone sinks of Victorian kitchens and sculleries have long ago been replaced by vitreous enamel and stainless steel, while the larger troughs, formerly used for watering cattle and horses, have given place to galvanized iron tanks.

The occasional specimen still turns up at country sales and in junk yards, but dealers are aware of their value and prices have risen astronomically. As an alternative, concrete or old glazed sinks can be adapted for the purpose. But neither of these will have the charm of the genuine article which, if it has been out-of-doors for any length of time, will be weathered and decorated with mosses and lichens.

Particular attention must be paid to drainage before planting up any of these containers. A piece of perforated zinc should cover the existing drainage hole and the base of the trough or sink should be covered with broken crocks or stone chippings to a depth of 5-8cm (2-3in). On top of this goes a layer of peat moss or chopped turves, the latter grass side down.

The planting mixture should consist of 2 parts of loam to 1 part of peat and 1 of sharp sand, with a dusting of lime or the addition of mortar rubble. The lime content must be omitted where ericaceous plants, dwarf rhododendrons, or other lime-haters are to be planted.

Among the many plants that can be grown successfully in a sink or trough garden are the hardier small saxifrages, sempervivums (houseleeks), thrift and other alpine plants of tough constitution. In a shady situation, mossy saxifrages, hardy cyclamen and miniature ferns will flourish.

For more permanent effects, use can be made of some of the dwarf shrubs and conifers mentioned below.

Miniature rose gardens Miniature roses have become generally popular in recent years. One of their main attractions lies in the opportunity that they afford of enjoying the beauty of roses where space would not permit the planting of a rose garden of the orthodox kind.

Sometimes known as fairy roses, many of these delightful dwarfs bear a strong resemblance to popular hybrid tea roses and floribundas. Others have equally delightful individual characteristics.

Little interest was shown by gardeners in these pygmy roses until after World War II, when scarcity of garden help and a swing from houses to flats and maisonettes brought their many useful qualities into prominence. These, apart from their compact habit, include permanence and a very long flowering season.

Many of the miniature roses stem from the dainty Rosa rouletti, a tiny rose that was discovered in a Swiss cottage garden by a Dr Roulet and named in his honour. From this charming miniature have evolved, directly or indirectly, many of the loveliest miniatures available today, including ‘Tom Thumb’, `Pixies’ and ‘Midget’.

Miniature roses are extremely hardy. They come into flower early—often by the middle of May—and continue to produce their flowers throughout the summer and autumn. They are best planted from pots as they do not like root disturbance. This makes it possible to plant them at almost any time of year although March and April are the best months for this operation. Those planted in summer should be given plenty of water during dry spells in their first season.

The many named forms now available can be used to create a complete rose garden in miniature or can be incorporated as a separate feature of a larger garden. They are also useful for permanent dwarf bedding schemes.

All the features of a full-sized rose garden can be incorporated, scaled down, of course, to suitable dimensions. Pygmy pergolas, trellises and small rustic screens can be used to support climbing varieties, while miniature standards will emphasize focal points and act as central features of miniature bedding schemes.

Miniature roses need only a minimum of attention where pruning is concerned. This operation is best carried out with a sharp pair of nail scissors. It consists mainly of removing weak growths and cutting back dead or diseased shoots to healthy wood. It is carried out in spring.

These small roses thrive best in similar types of soil to those in which the hybrid tea roses and floribundas do well. They like a fairly heavy, slightly acid loam, rich in humus. Lack of humus can be remedied by forking in well-rotted animal manure or garden compost, a few weeks before planting. If neither of these is available, peat or leafmould, laced with bonemeal, make satisfactory substitutes.

These dwarf roses will also flourish and look well in the old stone troughs already mentioned; the sinks are too shallow and there would be a danger of the roots drying out. They can be used, as well, for another kind of miniature garden, the window box, provided that the latter is at least 23cm (9in) deep.

`Baby Masquerade’, a newer introduction, is a perfect replica, in miniature, of the favorite floribunda of the same name, with clusters of flowers that produce the typical kaleidoscope of color of the latter.

This rose, together with ‘Cinderella’ (white pale pink-edged), ‘Coralin’ (coral-pink) and ‘Maid Marion’ is obtainable in standard form. There are climbing forms of the bright pink ‘Perla Rosa’, the yellow and orange ‘Little Showoff’, which is practically perpetual-flowering and ‘Baby Crimson’, which is also known as `Perla d’Alcanada’. ‘Pink Cameo ‘ , too, makes an attractive climber. None of these climbing miniatures exceeds 1.3-1.6m (4-5ft) in height.

A garden of dwarf conifers Another way of making a miniature garden, of interest the whole year through, is to use dwarf conifers. Many of these are replicas of their taller counterparts and can be used to obtain similar effects on a reduced scale.

First and foremost are the various forms of Lawson’s cypress, which share the useful characteristics of the larger kinds. Chamaecyparis lawsoniana minima glauca, with blue-grey foliage and whorled branchlets makes an interesting focal plant in a garden of dwarf conifers. It reaches an ultimate height of 1-2m (3-6ft), but this only very slowly. Similar in habit is C. 1. obtusa coralliformis, with red twisted branches and close-packed bright green foliage. C. pisifera `Boulevard’ is a comparatively new introduction with blue-grey sprays of feathery foliage while C. p. filifera aurea is practically a golden counterpart of the former.

There are two charming little cryptomerias that will not exceed 60-75cm (2-24ft). Goth Cryptomeria japonica pygmaea and vilmoriniana are slow growing and make dense globular bushes whose form contrasts well with the pyramidal shape of the dwarf cypresses.

One of the most outstanding of these miniature conifers is the dwarf juniper, Juniperus communis compressa. This makes a dense blue-grey column, only 60cm (2ft) tall. There are also two dwarf spruces with a conical habit in the same pygmy category as this juniper. They are Picea abies pygmaea, with close-set dark green needles and P. a. albertiana conica whose foliage is a softer green. Pinus sylvestris beauvronensis is a dwarf Scots pine, only 1.3-1.5m (4-4.5ft) at maturity, that can be planted to simulate a large tree in the scaled-down dimensions of a garden which features dwarf conifers.

The remaining space can be filled by the very slow-growing bun-shaped dwarfs such as Chamaecyparis lawsoniana juniperoides, a variety that grows only 10-16cm (4-6in) tall, with a spread of similar dimensions or Picea abies gregoryana, which makes a 46cm (1.5ft) hummock of grey-green foliage and is broader than it is tall.