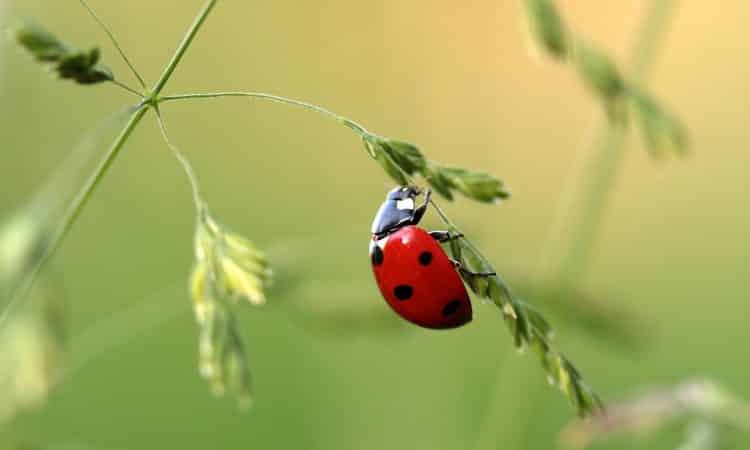 Although we focus on the insects that destroy our landscape plants and crops, these undesirable insects give a bad name to virtually all insect species, most of which are beneficial.  These either do no harm, provide food for desirable species such as birds, or attack and kill the pests we don’t want.  Here are ten common beneficial insects that we should be aware of in our yards and gardens.

Lady beetles, also known as ladybugs and ladybird beetles, are perhaps the most well-known beneficial insect.  The brightly colored, rounded beetles are often orange, but can be red, pink or yellow, and with or without spots.  If you see an insect that is black and orange, with an alligator-like shape, leave it.  This is probably the larva (caterpillar stage) of this beneficial beetle.  Both the larvae and the adults can eat hundreds of aphids in their lifetimes.  They also eat insect eggs, mites, and soft-bodied insects such as mealybugs.

One of these, known as the multi-colored, Asian, or Halloween lady beetle, enters homes in large numbers in the fall.  They often then appear in spring in huge numbers in warm indoor areas, on light-colored surfaces, and on windows seeking to get out.  Proper screening, patching cracks in exterior walls, and just vacuuming them up are simple controls (I have a hand-vac just for them).

While lady beetles arguably are the most known predator, spiders are the most abundant on landscape plants.  They’re actually not an insect, having eight legs and two body parts (insects have six legs and three body parts), similar to mites and ticks.  They are a diverse group, with over 3,000 species in North America, most not biting humans.

Ground beetles range in size from a quarter inch to over one inch long, and are shiny brown, black, or bluish-black.  They have long legs and antennae.  Most feed at night on caterpillars such as armyworms, cutworms, and grubs.  They may even eat small snails and slugs. A pair of adult ground beetles can eat over 300 gypsy moth caterpillars per year.

Praying mantids also are known by many, being up to three inches long, with their enlarged front legs held out in front as if praying.  They are not protected by state laws as some believe.  In fact, they may do more harm than good, eating anything they can including honey bees, other beneficial, and even each other!

Lacewings, both green and brown, are about three-fourths of an inch long as adults, with lacey wings.  They are attracted to lights at night and give off an odor when handled. Larvae are like small alligators, with sickle-shaped mouthparts (“mandibles”).  Green lacewing larvae are called “aphid lions” from their large consumption of aphids, as well as mites and other small insects.

Hover flies, also known as syrphid or flower flies, closely resemble wasps and bees yet they don’t sting.  One key difference is that they have only two wings.  Larvae resemble tiny slugs, and often are found feeding in aphid colonies.  Each larva can eat over 400 aphids.  Attract adults with flowers that provide lots of nectar and pollen.

Predatory bugs feed on nectar and pollen too.  They include several species.  Big-eyed bugs are black and white with silvery wings and bulging eyes.  They feed on most insects they can catch, including chinch bugs, small caterpillars, mites, and insect eggs.  Minute pirate bugs are similar, with similar feeding.  Damsel bugs are under a half-inch long, longer than wide, and with long legs. They spike on each shoulder.  They feed on over 100 types of insects.

Predatory wasps include ones that can sting us, and so we usually kill them on sight.  Bald-faced hornet, yellow jackets, and paper wasps though, are important predators of caterpillars and similar soft-bodied insects.  For this reason, try and coexist with them, only destroying nests (using proper precautions) if they threaten people and pets.

Parasitic wasps are a large group of many species, most tiny (under an eighth inch long, so often overlooked) to an inch and a half long.  They lay eggs inside hosts such as aphids and caterpillars. Once the larvae hatch, they consume the insect hosts.  Swollen aphids, and caterpillars with white eggs on their back, are examples of this beneficial insect at work.

Parasitic flies, also known as tachinid flies, are a diverse group of over 1,300 species.  They often resemble, so can be mistaken for, houseflies, bees, and wasps.  Many lay eggs on hosts, the hatching maggots boring into the hosts and killing them through feeding.  Hosts include caterpillars such as of the gypsy moth, beetles such as the Japanese, sawfly larvae, true bugs, and grasshoppers among others.

You can find diagrams of these insects, more information on them, methods to help and not harm them, and plants to attract them, in the online Extension bulletin 7150 from the University of Maine (extension.umaine.edu/publications/7150e).