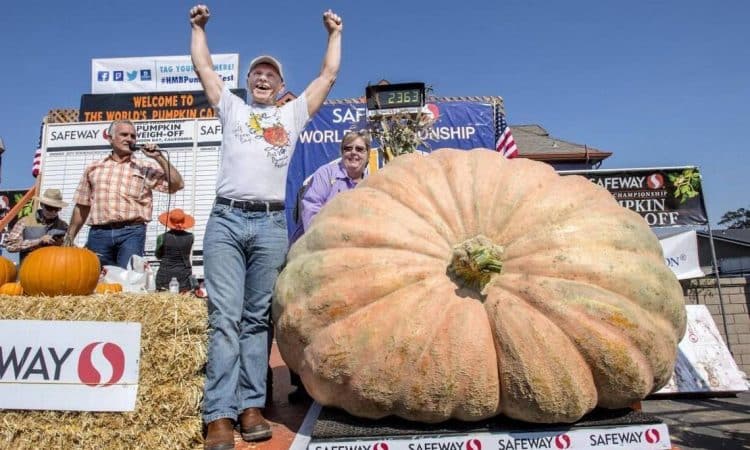 SOIL PREPARATION: Minimum space is approx. 300 sq. ft. per plant. Doubling this space or even more would be an advantage, and will generally result in a larger pumpkin. Prepare the soil by cultivation. Rake out larger stones, clumps of sod, etc. Incorporate into the soil an inch or more of organic matter in the form of compost, aged manure, peat moss, leaf mold, or rotted straw. Adjust pH to 6.0 – 7.0. Prior to planting, broadcast a balanced organic or commercial granular type fertilizer, and work into the soil.

STARTING SEEDS: Start seeds in 4″ peat pots about May 1 – 10, depending on local conditions. The tendency is to start too early, which generally works against the grower. The plants will need warm soil and settled weather to grow well. Seeds germinate best at 80 – 95 degrees F. Germination will be slow and may fail at cool room temperature of 65 – 70 degrees F. A commercial propagation mat may be used, or a warm micro-environment found. Some examples would be: Over a hot water tank, In the oven with just the light on, In a cooler chest with warm bottles of water inside, On a mantle near a stove, etc. Excess heat is to be avoided and moistened pots must be covered to avoid drying. Fill moistened peat pots with a good light potting soil. Seeds may be pre-sprouted between moist towels to 1/4″ root protrusion and then planted one to each 4″ pot, rooted side down and 1/2″ soil over the rounded end.

TRANSPLANTING: After 2 – 5 days, transplant the potted plant to prepared growing beds. Protect young seedlings with properly ventilated cloches or mini-greenhouses. Water as necessary to avoid heat stress or wilting. When well-established cloches my be removed. Wind protection my be needed until plant is well anchored with vines on the ground. Mound soil over vines at several leaf axils to stabilize plant and to encourage secondary rooting from the vines. Water as needed, adding balanced soluble fertilizer to water once per week. Control weeds with mulching, shallow cultivation, and hand weeding as necessary. Remember, shallow roots may extend 4 ft. or more out from the perimeter of the plant.

FRUIT SET: The plant should blossom and set fruit between July 1 and 20. Male blossom will appear first. Males are on long stems with a rod like structure inside the flower which is coated with pollen. The first open male flowers will generally be towards the center of the plant. Female flowers are on a short stem, and have a small round yellow pumpkin behind the flower. ‘The first female flower to open will be out from the center of the plant on one of the vigorously growing vines. In the absence of bee activity or to get an earlier set, the grower my hand pollinate a newly opened female blossom with several of the fresh male flowers. Pick several newly opened male flowers and tear away the yellow flower portion, exposing the pollen bearing stamen. Leave part of the stem to use as a handle and gently roll the pollen from the males onto the stigma in the center of the newly opened female blossom. Depending on temperature and weather, this is generally done from early to mid morning. Males from the same plant as the female to be pollinated, may be used, (self pollinated). However-,: for best seed quality, it is best to use males from a separate and not closely related plant, (cross pollinated). The plant must be large enough to support a fast growing pumpkin, therefore setting a fruit too early can have a negative result. The plant should have a minimum of 100 – 150 leaves before a pumpkin is set.

PRUNING: To avoid rampant crossing vine growth, it is advisable to trim and prune. Generally, 3 – 5 primary vines are allowed to grow out from the center of the plant in different directions. Side vines will develop on each of the primary vines, alternately at each leaf.. These side vines are allowed to grow, but are trained away from one another or pinched back before they cross. These side vines would in turn produce their own set of vines alternating at each leaf.. The third set of vines (tertiary vines) are removed from each secondary vine when they are small or in the bud stage. This results in a more open plant with better air circulation, which can help prevent disease problems. A pumpkin can be set on each of these primary vine structures. After 2 – 3 weeks select down to the best 2 pumpkins.

STEAM STRESS: Stress or tightness can develop where the stem of the pumpkin attaches to the vine. The vine must lift off the ground as the pumpkin grows taller. The vine will be rooted to the ground on the underside. These roots must be severed several feet each way from the pumpkin. Also as the pumpkin grows the shoulders of the fruit on the stem end my contact the vine and create stress. This usually happens on the side away from the center of the plant. The pumpkin may be moved very slowly 1 inch per day until it is at a 90 degree angle to the vine, ( both shoulders equal distance from the vine on each side of the stem). Never move the pumpkin early in the morning as the stem and vines are brittle when it is cool. Adjustments should be made a little at a time in the afternoon, starting when the pumpkin is approx. basketball size. It is helpful to have the pumpkin growing on the outside of a curved section of the vine. In this way the pumpkin will have more room to develop without pushing on it’s vine. The vine can be manipulated at the time of fruit set, so the female blossom is on the outside of a curved section of the vine. Stem stress symptoms can develop very quickly with a fast growing pumpkin. The vines near the pumpkin should be checked frequently for tightness. As the pumpkin grows taller, several feet of vine will be supported by the stem of the pumpkin in both directions. It is helpful to support the weight of the vine with blocks of Styrofoam or other material in order to take the stress of the stem.

Shading: When the pumpkin is small, it will be shaded by the leave of the plant. When the pumpkin grow larger, shade should be provided. Shading reduces the aging stress of direct sunlight on the tender skin of the fruit, and allows the shell to expand and stay flexible longer. Shading also reduces the internal temperature of the pumpkin, reducing the threat of rotting or splitting Splitting or cracking: Each year many large pumpkins crack or split while growing at a rapid rate. We walk a fine line. The grower wants his pumpkin to grow as fast as possible in order to reach a large size, and as a result may step over the unmarked line ( Sustainable growth curve). Some seed stocks are more at risk than others, especially those with genetic potential to produce pumpkins over 700 lbs.

Some factors which may help to avoid splitting include:

-Try to grow your pumpkin at an even moderate pace over the entire season. -Avoid large doses of fertilizer and water at critical phases of the pumpkin growth cycle. – High level of soil organic matter and an even concomitant moisture level can help moderate and buffer against growth spurts and stops. Multiple fruits on a risky cultivator may act as shock absorbers, spreading a surge in uptake over two or there pumpkins. Minor cracks can be managed by applying a fungicide and reducing water and fertilizer to the plant. Stem splits often appear much worse than they are. The stem is hollow and may split all the way through and tear into the flesh of the pumpkin a small amount. Sometimes this releases the stress allowing the pumpkin to continue to develop. Treat all wounds sites with fungicide, allow for good air circulation, and keep the area dry. Occasionally a stem split or a surface crack will continue to expand and deepen until the seed cavity is breached. Once the seed cavity is exposed to the outside atmosphere, the pumpkin is no longer a viable candidate for competition. No effort should be taken in regards to plugging or patching, as the pumpkin will rot from the inside out

PESTS AND DISEASE: Problems vary widely from region to region. In the Northwest, Giant pumpkin plants are relatively free of pest and disease problems. Sometimes black aphids appear o the undersides of the leaves later in the season. Aphids can spread the mosaic virus, but this has not been a major problem for Northwest growers. It is best to contact an experienced local grower for specific problems regards to insect or disease problems affecting pumpkins or squash in your area. Where vine borers and cucumber beetles are present, plants my need preventative action before pests are active.