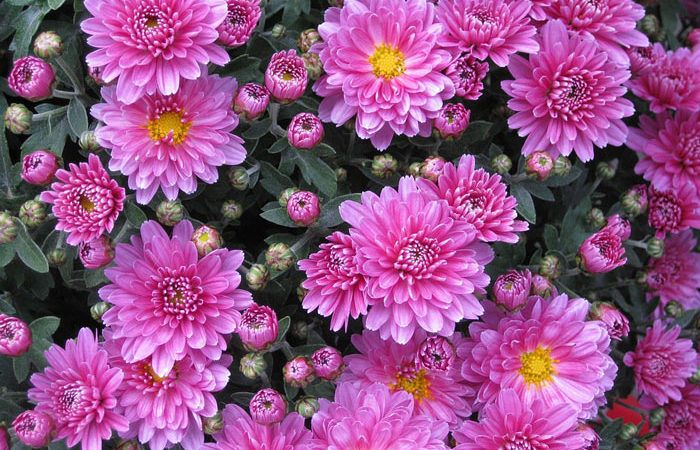 (Name derived from chrysos, golden; anthos flower, refers to fact that some species are yellow)

The Annual Chrysanthemums are popular in England, but not well known here although they grow nicely in the United States. The most popular sorts are: Chrysanthemum coronarium, the Crowndaisy, or Garland C., which grows 3 feet tall and is typically yellow, either single or double. C. carinalum (tricolor) (Painted Daisy) (Tricolor Daisy) grows but 2 feet tall and is usually white with characteristic rings of purple and yellow at the center. In both sorts the leaves are rather thicker than those of most other annuals. C. segetum, the Corn-marigold, has bright yellow Daisies. The plants are sparse of leaves, which are notched but not deeply cut as in the other two sorts. This is a wildling in the grain fields of Europe.

Where to plant. These plants provide in the garden large masses of bloom which are interesting as cut flowers.

GENERAL. The seed may be started as early as March in a hotbed or else sown directly in the open in April. Give the plants well-enriched soil and allow at least a foot between plants. To make them branch profusely they should be pinched.