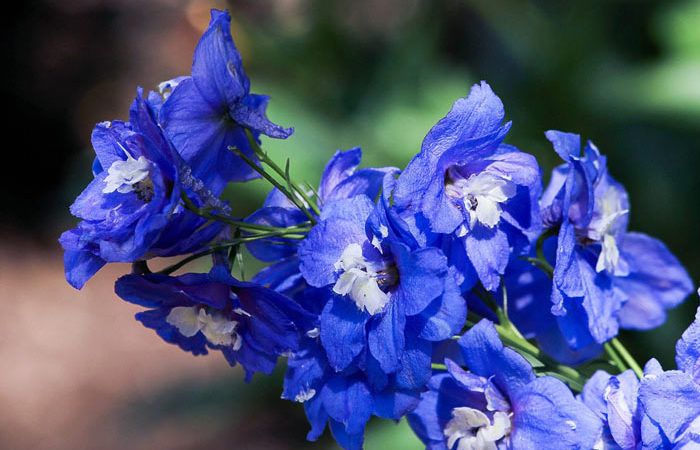 The Annual Delphinium is one of the best-known annuals, bearing long racemes of lovely colored flowers and lacy foliage. They have undergone great improvement in the color and the fullness of the spikes. The colors range from white to carmine, light pink, scarlet, light blue, and dark purple.

There are two main types. Those varieties derived from Delphinium ajacis are known as Rocket- or Hyacinth-flowered because they produce long trusses of bloom, but few side branches. Varieties of D. consolida are called Field or Candelabrum Larkspur because they branch freely and bear a mass of bloom in dense clusters, not in long racemes. The double varieties are refined in form and should be more grown. Many of the sorts grow two feet or more in height.

Where to Plant. Larkspurs provide bright, cheery masses in the border from early in the Summer until frozen in the Fall. The clear colors can be more readily obtained in the annual than in the perennial sorts. The flowers are easy to arrange gracefully in vases, and as they keep well, they are most acceptable as cut flowers. They may be forced in the greenhouse.

GENERAL. Seed may be sown either early in Spring or in the Fall. The plants are perfectly hardy and often self-sow, in which case they gradually become poorer and poorer. As they grow, thin them out to stand 8 to 19 inches apart. Transplanting without a ball of earth is often unsuccessful.

(Named for its supposed resemblance to the dolphin)