Coreopsis – Flower of the year 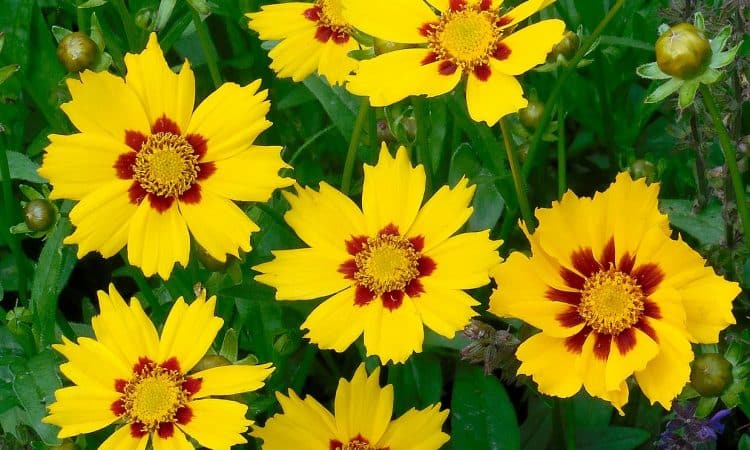 COREOPSIS – FLOWER OF THE YEAR

Coreopsis (said as core-e-OP-siss) is a popular flower—among the top ten perennials— with many new cultivars (cultivated varieties) to choose from in recent years. Coreopsis generally resist deer feeding, is drought tolerant once established, and being quite care-free are good for beginners and low-maintenance gardens. They’re popular, too, with pollinators, and provide seeds for birds (especially goldfinches). These are some of the reasons it has been named a flower of the year for 2018 by the National Garden Bureau.

This gorgeous flower has the unfortunate common name of tickseed, from the resemblance of the seeds to this insect. The genus name of coreopsis actually translates from the Greek ‘koris’ meaning bed-bug, and ‘opsis’ meaning appearance. Yet in the Language of Flowers, popular during Victorian times, this plant means “always cheerful.” Native Americans knew this plant, and boiled the flowers into teas or dyes for fabrics.

Coreopsis species and cultivars are similar in that they are members of the aster family, with the familiar daisy-type flowers. Most are clump-forming, but a few spread by runners, and many self-sow throughout the garden. They may bloom for much of the summer, in variations or gold or yellow (hence another common name—pot of gold), often with red or similar coloration. They’ll grow from six inches to three or more feet high, depending on selection. Most, though, are 10 to 18 inches tall, and 12 to 24 inches wide. Some have elliptical leaves two to five inches long, with entire margins or lobes, others (such as the thread leaf species and hybrids) are finely textured with very thin leaves.

The 100 or so species are native to North and South America, but particularly Mexico and the southern U.S. There are at least 33 species native to the U.S., and it is the state wildflower of Florida and Mississippi. Check labels, descriptions, or ask trained nursery professionals if the selection you want is an annual (lives only one year), a tender perennial (not for cold climates, as with many new hybrids), or a hardy perennial.

Many of the newer hybrids such as those from the Punch, UpTick, Jewel, Little Bang, Big Bang, and Sizzle and Spices series are only hardy to about -10 degrees (F) in winter or slightly lower (USDA hardiness zone 5 at best), so not for much of northern New England.

Coreopsis prefer full sun, tolerating part shade (especially in hot climates), but with less growth (they may be more lanky), and fewer blooms. They need a day length longer than 12 hours (generally 13 to 14 hours) in order to bloom (termed “long-day obligate”). An exception is the mouse ear coreopsis which will bloom with shorter day lengths.

Most cultivars benefit from removing old flowers after bloom (“deadheading”), and will rebloom within a few weeks. You can cut or pinch off individual flowers or, if too many, simply shear them off (you can remove up to one-third of the tips) with scissors or hedge shears. Avoid too much fertilizer as this may result in more leaves but fewer flowers.

Since many coreopsis is short-lived, only blooming well for three to five years, you may need to divide plants, plant new ones, or start new ones from seeds if their flowering declines. Hybrids and many cultivars can’t be started from seeds and “come true” (from the same plant as the parents). Divisions are best made in spring, as growth begins. Keep divisions or new plants well-watered until they’re established—several weeks to a couple months generally.

Unless the growing season or site is particularly wet, in which case slugs and snails may be a problem, they get few significant pests or diseases. Particularly in warm climates they may get powdery mildew disease too. A well-drained soil minimizes diseases and root rots.

Visit the National Garden Bureau website (ngb.org/year-of) to learn about other flowers, as well as vegetables, of this and previous years.