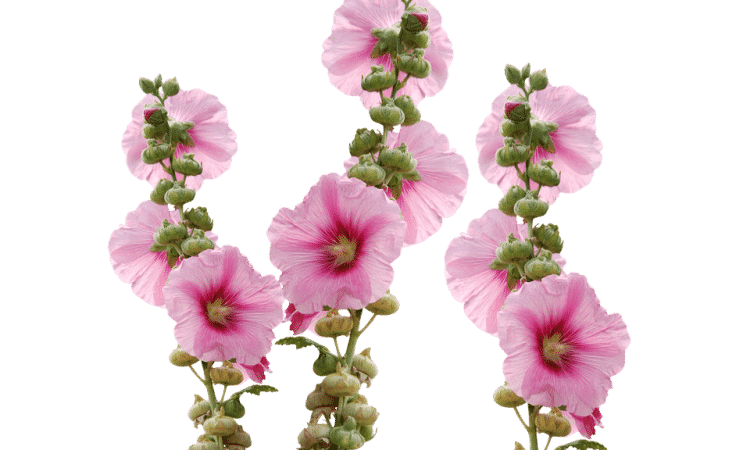 A constant, old-fashioned garden favorite! Hollyhocks have been universally admired for hundreds of years They are stately, majestic, towering plants that add beauty wherever they are grown. What other plant has so stately a habit or so many clear, lovely colors a In single plants or in masses against walls or buildings, in groups at the back or rear of the perennial border, interspersed with low shrubbery or in bold masses along drives or walks, they are alike effective Many fine plants will give their fullest effects the first year, so they are planted to advantage in the newly made garden when the trees and shrubs are low and the general effect is too bare of color and foliage.

There are singles and doubles. The doubles are popular, but the singles are always admired because of their simple beauty and individuality. A group of well grown Hollyhocks in bloom is worth going to see. It is really the color that we look for because the leaves are large, coarse and grow mostly in clumps at the base of the plant. The long spikes of flowers grow from. 5 feet to 8 feet high and there are usually from five to nine blossoms in bloom on each well grown stalk. The average size is about 2 inches or 3 inches across, but 5-inch blooms can be had if good attention is given. The colors range from white to almost black and include shades of pink, flesh, rose-pink, salmon-rose, golden yellow, canary-yellow, dark red, purple-crimson, dark maroon, white and combinations of practically all these colors with either white centers or white margins. The blooming period is from late June through September. Fringed petaled sorts are cataloged as Allegheny Hollyhocks and are exquisite. There are also annual sorts which may be depended upon to bloom the same year they are sown.

UTILIZE. Hollyhocks at the present time have a great landscape value to hide unsightly places, to work in the border, or among the trees and shrubs. They are also used for cut flowers but wilt very rapidly.

GENERAL. They require a deeply dug, well-drained soil made up of equal portions of good loam and leafmold. Well decayed manure is good also to mix in the soil. They should be planted in a warm place and given plenty of water during dry weather.

PROPAGATION. As the seeds ripen in August they should be sown in light soil and the seedlings grown in coldframes during the Winter. The ground should be well prepared and the plants put in just as early as the ground can be worked. Hollyhocks self-sow very rapidly.

DISEASES. Hollyhocks, where grown for a number of years in the same place, are troubled with a rust. It causes little trouble, however, among vigorous young plants. A mixture of lime and sulphur blown under the leaves will prevent any serious outbreak. Bordeaux mixture is also effective. Badly infested plants should be dug and burned. Keep down the growth of the Mallow-like weeds. Much of the trouble with the rust is eliminated if the seed is sown as advised in August instead of Spring.