Double Hollyhocks for Your Perennial Border 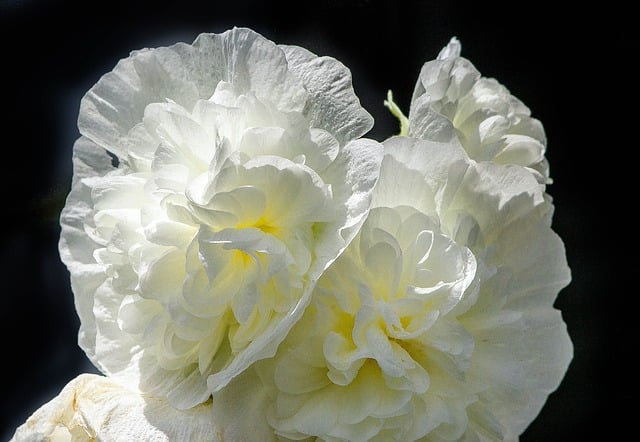 All gardeners are familiar with tall single hollyhocks which can be used so effectively to screen an ugly view or to soften the harsh lines of a bare wall. But few realize that the single-variety has an even richer looking more stately relative-the double hollyhock.

Unlike the single with its rather rank growth and coarse, somewhat unattractive foliage, makes it undesirable except in a large perennial border, the double variety develops into a compact, clean-cut plant with attractive bluish-green leaves. From the crown of the plant rise as many as a dozen 4- to 6-foot flower spikes, bearing all along their length very double, carnation-like flowers in a myriad of delicious colors ranging all the way from snowy white through buff, apricot, pink, rose, bright red and maroon, to an almost black hue. Many of the blossoms measure as much as 4 inches across and are so fully double as to give an impression of considerable depth. The flowers open in succession from the bottom to the top of the stalk, but the individual blooms last so well that by the time the buds at the tip are bursting, the first flowers are still attractive.

The double hollyhock, in addition to giving accents of color to the perennial border for the first two to three weeks in July when the delphinium, columbine, and iris have gone by, and before phlox comes into bloom, also can add a touch of color to the living room as a tall bouquet, or grace to the dining table in a crystal bowl arrangement with floating blossoms. The clever person who likes to experiment with making her own corsages can fasten several of the blooms together into a charming decoration for her dress or hair. Many compliments will be hers for her original creations.

Double hollyhocks are as easily grown as singles. Although they are usually listed as perennials, they will succeed best if raised as biennials. Plants can be purchased from many nurseries for setting into the perennial border either in the fall or spring. Or they can be raised from seed with little difficulty. Seeds should be .sown in a well prepared bed in May and June. If the soil is kept moist, germination will be rapid-within five to ten days. The seedlings should be thinned out till they are 6 inches to a foot apart. This will give sufficient room for healthy plants with good root systems to develop.

If the seed is sown sparingly in the row, little thinning will be necessary. Seed can be sown directly in the border in open spaces where the seedlings will not be shaded. To establish a row along a wall or fence, sow the seed in hills a foot apart. Sow five seeds to each hill and thin to the strongest plant.

In late August or early September following a soaking rain, the plants in seed beds should be moved to their permanent; location. If each seedling is dug with a good ball of earth, and reset carefully, little ill effect from the transplanting will be noticed.

Double hollyhocks grow best in a deep, rich, well-drained soil in a sunny location sheltered from strong wind. Because of their height, they should be set at the rear of the flower border. If possible, allow at least two square feet of garden to a plant. In areas where winters are; severe, some protective mulch such as peatmoss, leave, or evergreen boughs will help prevent serious injury from frost heaving.

Hollyhock pests are of little consequence except for rust, which can be devastating in a damp summer. The only methods of control and these are not very satisfactory, are to pick off and burn any infected foliage as soon as it appears, and to keep the remaining leaves, particularly the lower surfaces, dusted with, sulfur. Occasionally the plants may be infested with aphids. Good spraying or dusting with a contact insecticide will get rid of them in short order. In certain regions, the Japanese beetle may be bothersome. Hand picking is the most effective remedy.

If the gardener keeps in mind these few simple cultural practices, you will be amply rewarded by growing vigorous double hollyhocks which will receive the attention and admiration of all those who visit your garden.

Double Hollyhocks for Your Perennial Border by J. LOWE