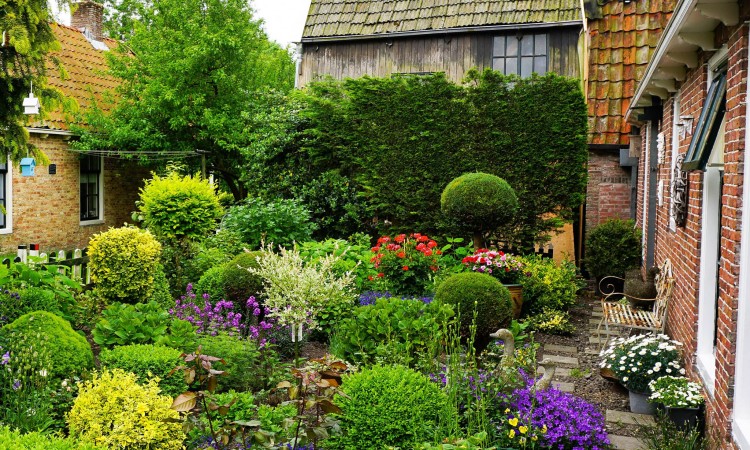 This is the time of year when garden pundits tell their disciples
to bring in branches of forsythia, pussy willow or flowering
quince for indoor bloom.

A minority of those disciples will follow orders, the rest
(and I am one of them) will wish they had actually planted
some of those spring flowering shrubs last year or the year
before so they could reap the rewards.

So this year I vow to make it my business to order flowering
shrubs. They add to the beauty of the garden, and require
less maintenance than most mixed borders. And, as far as maintenance
goes, flowering branches help maintain human mental health
in late winter and early spring. That alone makes them worth
a little forethought.

But suppose you, like my husband, just can’t stand the chromium
yellow color of the average forsythia. The answer is, of course,
White Forsythia (Abeliophyllum distichum). This native of
Korea sports flowers that are shaped just like those of a
conventional yellow forsysthia, but they are pink in bud and
white once the buds have opened. The flowers are slightly
fragrant, and cut branches respond to forcing in the same
way as other forsythias.

If pastel colors leave you cold at the end of winter, the
answer just may be Flowering Quince. Known to the botanists
as Chaenomeles speciosa, Flowering Quince is a relatively
small shrub that shines in the early spring. The ‘Texas Scarlet’
cultivar has bright red flowers and long branches that are
perfect for cutting. Eventually the plant also produces tart
fruit, which is nice if you or a relative like to make quince
jelly.

Everyone talks about witch hazel, but I know few people who
actually grow it. This may be because while the fragrance
is wonderful, the flowers look rather ragged. For something
a little more inspiring, try Fragrant Wintersweet (Chimonanthus
praecox), which has yellow flowers with red centers. The shrub
flowers early and the branches respond well to being brought
indoors. The perfume is quite amazing.

Buttercup Winterhazel (Corylopsis pauciflora) is one of the
first shrubs to flower, and its blossoms, not surprisingly,
are the color of buttercups. The shrub itself can take some
shade, making it a must for people who have limited sunny
space. The flowers are bell-shaped rather than tattered in
appearance, and they are pleasantly but not overpoweringly
fragrant.

My mother always brought pussy willows into the house in
the spring, only to be thwarted by our Siamese cat who alleviated
the pangs of spring fever by attacking the arrangements. Eventually
we learned to thwart the cat by placing the pussy willows
in a cat-proof location. If you like pussy willows, you should
try growing some in your yard, or even in a large pot on a
terrace or balcony. The Giant Pussy Willow (Salix chaenomeloides)
has red buds that open to reveal huge catkins that can grow
to be 2-3-inches long. As the catkins age they take on a silvery
pink tint that makes them look even better, both in the garden
and in the house.

If you are one of those people who goes to restaurants and
orders black food such as pasta in squid ink (or even if you
aren’t), you will adore Black Pussy Willow (Salix gracilistyla
‘Melanostachys’). As with almost everything in nature that
is not actually dead, the catkins are not truly black. However,
they are dark enough to appear black from a distance. When
the stamens develop on the catkins, they are bright red, making
the total effect quite dramatic.

You can get White Forsythia, Black Pussy Willow and a host
of other spring shrubs from several vendors including Bluestone
Perennials (800/852-5243 or online at www.bluestoneperennials.com)
and Wayside Gardens (800/845-1124 or online at www.waysidegardens.com).
Do it this year, and next year you can happily check off an
item on the long list of things that you wish you had done.
After all, Nature abhors guilt as much as it abhors a vacuum.