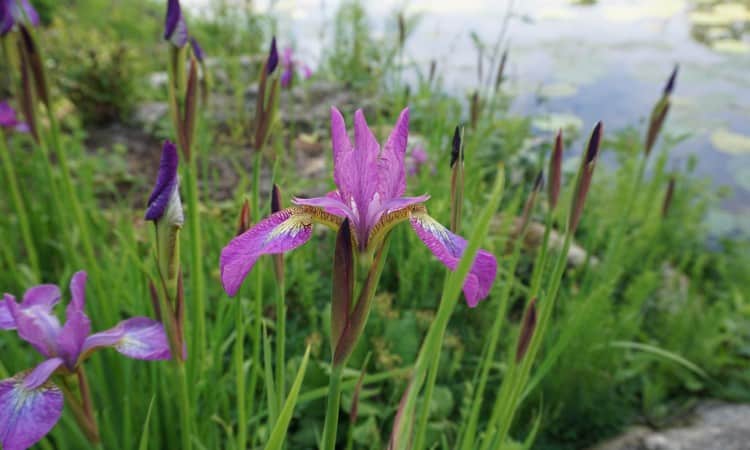 In spring any color is welcome, but I sometimes think that we end up with a glut of yellows, especially when the daffodils are out. Fortunately, Mother Nature gave us contrast in the form of a few blue flowers that bloom at the same time. The best ones, lungwort (Pulmonaria sps.), false or perennial forget-me-not (Brunnera macrophylla) and true forget-me-not (Myosotis sps) are all members of the borage family. Like the herb of that name, they are most notable for their striking blue flowers and carefree habits.

In my yard, pulmonarias are the first borages to arrive. These low-growing plants, with their distinctive spotted leaves, sprout along with the earliest daffodils. My pulmonaria have been in the ground several years now, and the plant tag for the biggest one has been blown to the four winds, so I have forgotten the cultivar name. Fortunately the flowers are absolutely unforgettable. Unlike some of the blue hyacinths and bluish violets, they do not look as if they were poised somewhere between blue and purple. With small blossoms like flared bells, they are a shade between electric and cerulean blue. These plants flower over a fairly long period of time, and older blossoms fade to a pinkish tone. It doesn’t matter. The young flowers are absolutely inspirational.

The various members of the Brunnera, or perennial forget-me-not clan, are distinguished by their heart-shaped leaves, which tend to begin increasing in size as the flowers fade and continue increasing in size until frost, or nuclear attack, or some other major event stops them. Several cultivars, including Brunnera macrophylla ‘Jack Frost” come with variegated leaves for added interest later in the summer. In the spring though, what counts is the flowers, and the blue brunnera blossoms are almost indistinguishable from those of its country cousin, the true forget-me-not.

Occasionally I see true forget-me-nots in the garden center, usually on a pallet in the back. More often I see them at herb sales and gardeners’ swap fests. Generally speaking, they are not one of those plants that people buy. They are one of those plants that people get by moving into a house with a garden in which they are already established, or by receiving them as a “gift” from another gardener.

One gardener that I know got her forget-me-nots along with her impressive Victorian house. She is one of those people who moves through her flower beds leaving a trail of absolute perfection in her wake, and if she weren’t so nice, it would be easy to let jealousy sour my admiration of her accomplishments. Fortunately I know that some of the secret of her perfect spring garden has to do with the inherent nature of forget-me-nots.

When my friend bought her house one fall a few years ago, she spent all her spare time installing hundreds of daffodils in the hilly, rocky garden space beside the structure. When spring came, the daffodils came up, emerging from an unexpected sea of blue forget-me-nots. The effect was brilliant and artistic, and, in short, perfection. My friend reaped many well-deserved kudos from neighbors and passers-by.

Later in the summer I got a call from my friend, who was attempting to give away a few hundred surplus forget-me-nots. They’re everywhere,” she groaned. “I just can’t get rid of them. I took a box of them off her hands, and, I hope, made her feel better. The following spring her daffodils rose from an even larger sea of blue. The forget-me-nots had taken my friend’s heroic efforts at culling as a sign of affection, and returned with a vengeance. Even my perfect friend now thinks that there may be such a thing as too much perfection—at least when it comes to myosotis.

People have told me that I have a tendency to anthropomorphize plants. It’s absolutely true. I can look at a rose or a beech tree or a violet and have a strong feeling that the plant in question is either male or female. If I live with that plant for awhile, I begin to notice distinct personality traits. I can also look at people and see plants. Another of my dear friends, who is suffering from a terminal illness, reminds me of a forget-me-not. Both the plant and the woman are small and have a habit of blooming wherever they are planted. The flower inspires because it has a habit of showing up without warning, sometimes in unexpected places, and spreading itself around generously by self-seeding. My friend had a habit of mingling with wealthy and celebrated friends at night, then showing up the next day, fresh and focused, at the New York City correctional facility where she taught writing to inmates. She sprouted in the rich soil of a prosperous, loving family, but she spread herself around just about everywhere. She was lucky in life, but also smart and tenacious. Whenever I see a forget-me-not sprouting vigorously in the rich soil of one of my garden beds, then see another one sprouting even more vigorously from an improbable place between two stones in a wall, I will think of my friend. As long as there are forget me nots, I will remember her.