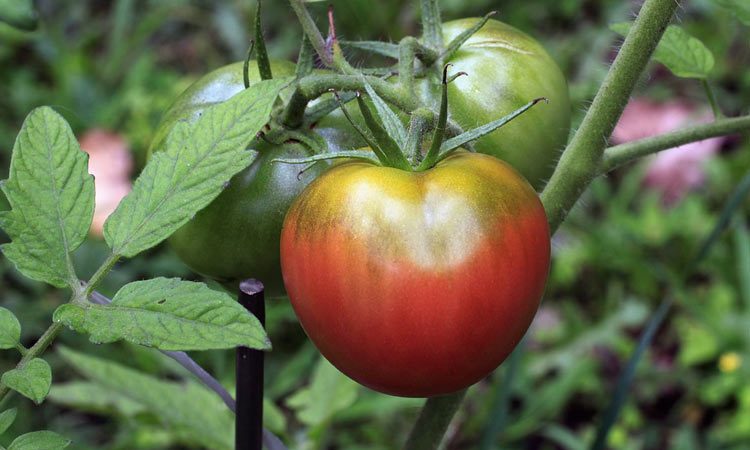 In the 70’s, my father would pack all of us in the station wagon, and drive for what seemed an eternity to visit my relatives. I was pretty young, but I can remember two details quite vividly. My brother getting me to ask, “Are we there yet?” and, visiting my Grandparents. My Grandma was an avid cook and gardener. While my older brothers would go fishing with my cousins, she would have my sister and I help with her gardens – watering, weeding, moving dirt and the like. We loved it! As a treat, she would serve us her tomatoes, ripened on a windowsill, cut and covered with sugar. As a young adult, the rich flavor of those deeply colored fruits escaped me. Store bought tomatoes, never had the flavor, and even the big beefsteaks from my own garden failed to quite capture the color and texture I remember from those hot summer days. I have always believed that my Grandmother had some growing secret. A few years back, I figured it out! My father told me, his grandmother gave him those same tomatoes when he was a kid. Grandma was a seed saver! Today, her ‘secret’ would be considered an heirloom vegetable garden.

Growing heirloom vegetables is becoming increasingly popular, and can provide us edible glimpses into our agricultural heritages. Many of the hybrids offered today are designed to be better suited for survival, offer a more consistent yield, and can be grown in a wider range of climates. But the recent increase of support for growing heirloom fruits and vegetables has caused many seed catalogs to carry these seeds, devoting entire sections to them. This makes acquiring these seeds easier than a trip to Grandma’s. In order for plants to be considered heirlooms they must have three characteristics.

First of all, almost all heirlooms are open-pollinated varieties. Most of the seeds sold today are hybrids and seeds from these plants will usually take on the characteristics of just one of their genetic parents. Heirlooms will grow “true to type” from their seeds. This means seed-savers (like Grandma) can enjoy the identical variety year after year. You can share the seeds of successful plants with friends and family. Some heirloom perennials are propagated from cuttings rather than seed, and while still considered heirlooms, their seeds may not produce exact genetic varieties. However, these are the exceptions rather than the rule. Some hybrids are stabilized and will open pollinate, but have not stood the test of time and are not considered heirlooms.

You should be able to trace heirloom varieties back fifty years or longer. This year marker is an arbitrary gauge. Yet many of the heirloom vegetables available can be traced back even farther. Pre World War II seed catalogs are filled with today’s ‘heirlooms’. Commercial seed companies dropped most of these for the more durable hybrid counterparts. But, these heirlooms have been rediscovered and are beginning to become available again today. The fifty-year cut-off predates most popular hybrids, and many of these early varieties are lost. But this makes today’s true heirlooms that much more precious.

The final determining characteristic of heirloom vegetables is their histories. Many of these varieties were collected and saved by families and ethnic groups dating back to their European or South American counterparts. Seeds were gathered and saved, for the following season’s crop. This practice protected the genetic make–up that made the specific plant successful within each particular environment. These base characteristics have become invaluable and the genetic strains of these vegetable forefathers are the backbone to today’s disease and drought resistant hybrids. Professional seed houses collect and store these to preserve these characteristics to combat future unseen agricultural catastrophes. These histories are what make today’s heirloom vegetables edible pictures into an often over looked part of our heritage.

I have never discovered the exact variety my grandmother used to grow (although ‘Brandywine’ seems awfully close). Unfortunately, the seeds she had propagated and saved for so long have been lost. But, the search to recapture those summer day treats has brought me hours of joy, and tons of tomatoes. I spent years learning how to garden. But, the practice of growing heirloom varieties has opened my eyes to a fascinating history of plants and agriculture. Now, when friends come over, we discuss my garden, and they get a brief history of some of the plants, and a packet of seeds. The heirloom vegetables I grow may not be the exact ones my great grandmother grew. But, they sure could be.