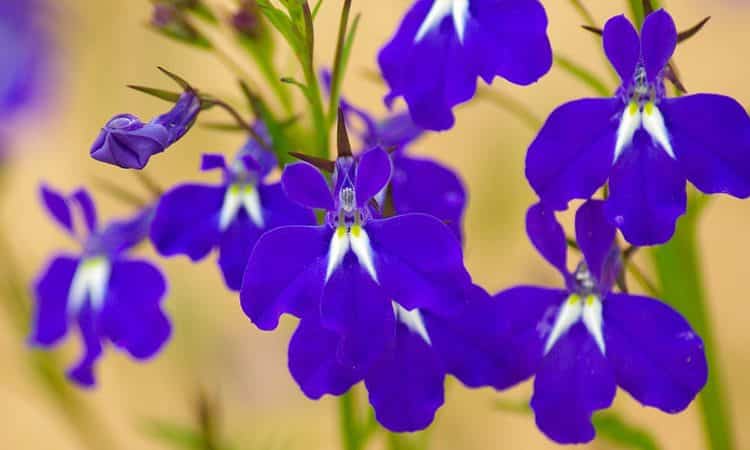 My favorite Salvia is one which I have never seen listed in any catalog. It is Salvia uliginosa, a tall plant with willowy stems to a height of four feet. Each branch ends in a narrow plume of sky-blue which lengthens with the season until it sometimes measures a foot or more in length before the summer is gone. The spikes are fresh-petaled every morning with innumerable blossoms of typical salvia shape, the color of an early morning sky. The foliage resembles that of the common Mint, and in this locality is green all winter. Though its wand like stems sway languidly with every breeze it never sprawls and it never needs staking. A plant of this type is invaluable in the hardy border. It generously furnished its own refills and the original spikes are good for an entire summer.

This rare Salvia is one of the few perennials robust enough to hold its own in the wilder parts of the garden and on the fringes of woodland where it makes a splendid showing, which can still be used in the perennial border as a perfect backdrop for choice plants without danger to their safety. It is as shallow-rooted as Rehmannia.

One whose color schemes include blue, as mine invariably do, will find it an effective background for orange Lantanas. It is good, too, with the flat heads of yellow Achillea filipendulina. Because of its summer-long blooming period it can figure in innumerable pleasant associations. The lavender Bee Balm (Monarda fistulosa) offers a contrast in flower form and the colors, combined, are cool as mint julep. Lythrum’s wiry plumes of raw magenta blend beautifully-it’s a smooth combination, magenta and blue. A Plumbago-covered wall is a perfect frame for magenta Phloxes. Another Phlox, the dwarf B. Comte, and another Plumbago, Ceratostigma plumbaginoides, combine to make a fine team for a low border in late summer. The more B. Comte is pinched the later it blooms and the less it sprawls. In my garden Blue Butterfly (Commelina nudiflora) is allowed to seed around established clumps of the Poppy Mallow (Calirrhoe involucrata). The shallow cups of fiery magenta are a perfect foil for the big butterflies of intense gentian blue. This is my favorite way to use magenta-combined with pure blue it is never harsh. It seems to mellow, to melt and fade into the depths of its blue companion.