Evergreens plants for your garden 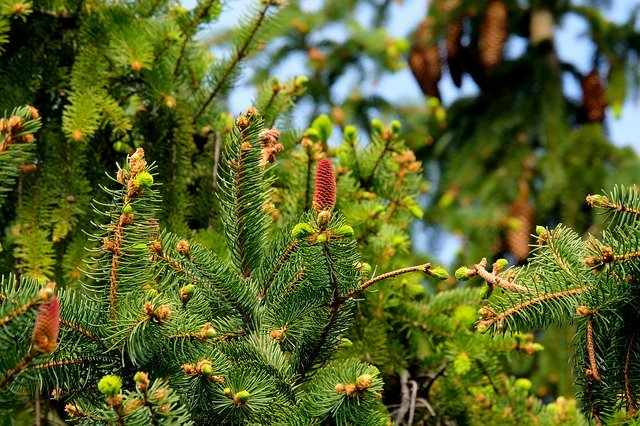 Evergreens have an important role to play in our gardens, particularly during the winter, when their value is so much enhanced by the way in which they brighten otherwise dreary surroundings.

It is not, however, at this season alone that they add their lustre to the garden scene. In spring and summer, as well, their foliage, in many instances a rich dark green in color and glossy in texture, provides interesting contrasts to the more delicate green of deciduous shrubs and trees. It acts also as an interesting foil to the brilliant colors of the floral displays of spring and high summer, while in autumn, its sombrehues make the leaf colors and bright berries shine more intensely by contrast.

Although some herbaceous plants might be called evergreen, in the sense that their summer foliage does not die down in winter, and there are a few trees, such as the holly and the holm oak, that retain their leaves all the year round, in general, when we talk about evergreens, we are thinking of shrubs. Evergreens as Hedging Plants A number of evergreen shrubs make useful hedging plants; apart from certain conifers, such as yew, cypress and thuja, nothing makes such a dense, permanent screen that ensures year-long privacy. Furthermore, a hedge made of flowering evergreen shrubs, is valuable for the sake of its colorful blossoms.

The choice of suitable material is wide; it includes many of the barberries, such as Berberis stenophylla and B. darwinii, escallonias, with their pink or crimson tubular flowers, ideal seaside shrubs, Pyracantha rogersiana, a form of the well-known scarlet firethorn, well suited for hedging, and the useful Viburnum tinus, or laurustinus, with its pinkish-white flower clusters that appear in such lavish profusion from late January until the end of April.

Given the necessary acid soil, rich in humus, there are a number of rhododen drons that make handsome evergreen hedges, including the common purple-flowered R. ponticum, a vigorous shrub that has naturalized itself in many parts of the British Isles, and the early-flowering R. praecox, ideal for the milder parts of these islands, where late frosts cannot spoil the beauty of its lilac blossom.

Where beauty of foliage alone is desired, box, laural, holly, aucuba or Lonicera nitida would all be good choices for hedging. As a last resource, there is always the much maligned privet, which although not strictly evergreen by nature will retain its leaves throughout the winter if it is kept regularly and closely clipped during its growing season.

Used in the lawn, or at focal points of interest in the garden, evergreens make first-rate specimen shrubs. For the rock or heath garden, too, miniature versions of many larger shrubs are available, scaled down to proportions more in keeping with these lilliputian surroundings.

One of the handsomest evergreens suitable for use either as a lawn or wall specimen is the stately Magnolia grandiflora, whose king-sized oval glossy leaves make a wonderful setting for the beauty
of the creamy-white scented blossoms, many of which will be 20cm (8in) or more in diameter. This shrub flowers from July to September and the cultivar `Exmouth’, sometimes listed as lanceolata, although very similar to the type plant, scores additional points for the attractive cinnamon indumentum, or `felting’ on the underside of its magnificent leaves, and because it flowers when younger than the type.

The arbutus makes a lawn specimen of almost equal beauty and dignity. The strawberry tree, A. unedo, which reaches 4.5-12m (15-40ft) or more and has dark green foliage and cream-colored, heathlike blossoms, is the form most widely grown. Rivalling the beauty of the polished foliage are the scarlet, strawberry-like fruits that ripen as the following season’s flowers start to open, so that you have fruit and blossom on the shrub at one and the same time. There is a hybrid, known as A. x andrachnoides, which is less vigorous and easily distinguishable by its handsome mahogany-red bark, its grey-green foliage and vivid orange-colored fruits.

Evergreens in the Shrub Border

For the border itself, the choice Of species and varieties is even more varied. Many of the shrubs available are members of favorite plant groups that contain also deciduous species. Prominent among them are the cotoneasters and barberries with striking evergreen forms such as the ever-popular C. lactea, the prostrate C. dammeri and the grey-foliaged C. franchetii, together with Berberis darwinii with small, holly-like leaves, and B. gagnepainii, with crimpled foliage.

We tend sometimes to forget that heathers are shrubs and evergreen ones into the bargain. For the border where space is restricted, they are among the most valuable and few evergreen shrubs would be capable of giving a more striking all-round display. The winter-flowering species. E. carnea in particular put on an amazing show in the garden’s ‘off’ season, but this is not their only virtue, as their foliage remains fresh and attractive even when they are out of flower. Used as carpeting plants among other taller shrubs they will act as highly effective weed smotherers, as also will a number of other prostrate evergreens such as Gaultheria procumbens or Cotoneaster dammeri.

During the winter months, variegated evergreens, such as the green and gold wood olive, Elaeagnus pungens aureo-variegata, the gold and silver-variegated hollies and the golden box, Buxus sempervirens elegantissima, will all give an impression of sunshine in the garden, even when winter skies are grey and overcast.

In pots, tubs, urns or other similar containers, evergreens, with their all-the-year-round beauty, are more useful, than any other plants for use on terraces and stretches of paving or as an adjunct to other formal garden features. The sweet bay, Laurus nobilis, clipped box, and some of the semi-dwarf rhododendron hybrids such as the scarlet-flowered ‘Britannia’, are examples of shrubs that can be used in this manner.

Evergreens provide, as well, an attractive permanent covering for house walls, fences and pergolas and are unsurpassed for screening or camouflaging unsightly sheds and outbuildings. Climbing evergreen shrubs include the ivies—the gold and silver-variegated forms are the most attractive—pyracanthas, honeysuckles and others that will soften the sometimes over-severe lines of contemporary architecture or emphasize the mellow charms of older buildings.