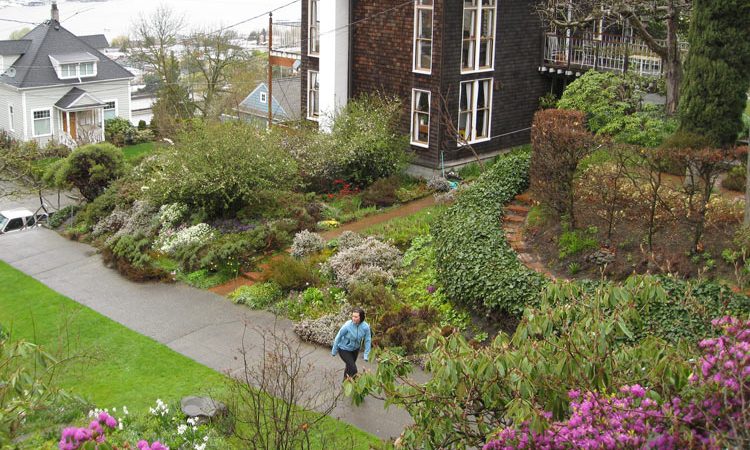 A bank of soil, whether natural or built of material taken from excavations, may offer a difficult problem to the gardener, particularly if the soil is poor. Yet such a position can be made truly attractive; it is often possible to transform an ugly bare bank into a charming rock or wall garden at slight expense.

Plants for Hot Dry Banks. If a bare bank has to be covered with vegetation at little cost, even though the soil be poor and gravelly, it can be done by the free use of such plants as trailing Roses, creeping Phlox, Thymes, Sedums, Helianthemums, Snow-in-Summer, Achilleas, shrubby Pentstemons, low Cotoneasters, prostrate Junipers, Day Lilies, and Bearberry. Minimum soil preparation consists of making a sizable hole for each plant and filling reasonably good soil about its roots.

A Rock Garden on a Bank. By undertaking special preparations much more can be done. What opportunities banks afford for rock and wall gardens! In the first scheme the bank provides a good foundation on which to build masses of rock, or selected pieces of weathered stone can be inserted here and there. If the bank is too straight to be pleasing it can be improved by taking out bays, making depressions, and by introducing shelves of rock, taking care while the work is in progress that suitable soil is brought in for the plants that are to be grown. For many of the commoner plants the natural soil will probably be suitable.

Winding paths or stepping stones may be necessary on high banks to enable the gardener to obtain a close view of his plants and to provide convenient access for working among them. While the work is in progress a water supply should be laid in; if this supply can be so arranged that by turning a faucet a fine spray of water is available from hidden pipes to reach all parts of the bank, it will be a decided advantage, for rock gardens formed on banks often get very dry and parched during a period of drought.

Plants for a Rock Bank. There is scarcely a limit to the number of plants that can be used in such a rock garden. Connoisseurs, by taking advantage of various aspects and introducing different conditions and soils, have the whole range of dwarf, hardy plants to choose from, whereas those with modest ambitions can produce very colorful effects with groups of such common plants as Alyssum, Aubrieta, Iberis, Saxifrage, Sedum, Dianthus, Primula, Campanula and dwarf Phlox. To give height and color in winter there is the choice of a wide range of dwarf Conifers such as Spruce, Cypress, Juniper and many other kinds, in addition to a number of dwarf leaf-losing trees or shrubs, such as low-growing varieties of Japanese Maple. In climates where they thrive, many of the newer dwarf Rhododendrons are excellent for positions such as are afforded by rocky banks, and there are various suitable kinds of Daphne, Heather and other dwarf-flowering shrubs.

Supporting Banks with Tree Stumps. A modification of the rock garden type of bank can be made by using large stumps and roots of trees partly embedded in the bank to form bays and shelves filled with rich soil in which Rambler Roses can be planted. These should be allowed to develop naturally with their branches falling over the tree roots. If the position be cool and shaded, groups of Ferns and other woodland plants may be planted about the tree butts with effective results.

Rock Retaining Walls. Should the owner’s tastes turn to wall gardening, a bank offers an ideal position for the purpose, for the bank can be terraced and the terraces held in position by low walls of suitable rocks, soil being used instead of mortar between the joints. A variety of early spring-flowering plants do well in such places, but the best effects are those provided by permanent plants such as Sempervivum, Sedum, Saxifrage, Dianthus, Thyme, Aubrieta, Iberis and dwarf Hypericum. If the soil is moist and there is not much sun, Ferns and hardy Primulas can be grown. The terraces may be laid down to grass or with random paving, in the crevices of which suitable dwarf plants can be grown. In such places, where the soil is good, an effective display of the more attractive very dwarf annuals can be made.

A rocky bank sometimes occurs whereon there is little soil, but even in such a position it is possible to grow plants. Advantage should be taken of every nook and fissure that will hold soil, these being deepened and filled and seeds or small seedlings of rock-loving plants inserted. Seedlings raised in this way often respond much better than larger transplanted plants. From the very first they begin thrusting their roots about in search of food material. It is not unusual to see flowering plants, such as Erinus, Sedum, Snapdragon, Foxglove, Mullein and others, thriving in such positions.

On grassy mounds and gently sloping banks beneath tall leaf-losing trees, it is possible to ensure a charming display of flowers in the spring month by planting bulbs in autumn. Snowdrop, Crocus, Winter Aconite (Eranthis hyemalis), Squill (Scilla sibirica), and Glory of the Snow (Chionodoxa) are suitable to plant in such positions. There they will thrive and increase as the years go by. All these bulbs are of low growth and, as their leaves die in early summer, they are not unsightly for very long after the flowers have faded. The leaves must not be cut until they have turned yellow or the bulbs will be weakened.

BANKSIA—Australian Honeysuckle (Bank’sia). These tender evergreen shrubs and small trees from Australia belong to the family Proteaceae, and are cultivated for their ornamental foliage. The undersides of the leaves are a silvery white and form a pleasing contrast to the green upper surfaces. The name commemorates Sir Joseph Banks, a former President of the Royal Horticultural Society of Great Britain.

Banksias, when grown in a greenhouse, require a minimum temperature of 50 degrees, and a compost of equal parts loam and peat lightened with sand. Repotting is done in March, the pots being well drained. Banksias are grown outdoors in southern California.

Propagation is effected by inserting well-ripened shoots in sand in a propagating case in the greenhouse in August—September.

The chief kinds are Banksia grandis, which has large, divided leaves; B. integrifolia, which has oblong to lanceolate leaves; and B. ericifolia, with very narrow leaves.