Grow and care for Geraniums (Pelargoniums) 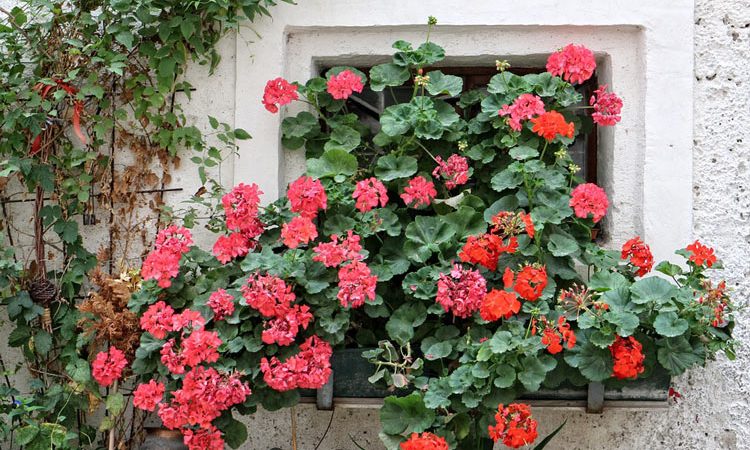 The geranium was introduced into Europe from South Africa towards the beginning of the 17th century; today it is one of the most popular of flowers. It is native to South Africa, Australia and Turkey, but is now widely grown in the temperate areas of the world.

Of the several sub-divisions of the genus the following six are the most popular.
1. Zonals (P. hortorum) Commonly but incorrectly known as ‘geraniums’, these are widely grown in beds, greenhouses, tubs, urns, borders, etc. Foliage may be zoned or plain, flowers single, double or semi-double, colors ranging from white through all shades of salmon and pink to reds and purples. Included in this section are Irenes, Deacons, Rosebuds, Cactus and Stellar varieties, detailed as follows :

IRENES This vigorous strain was raised in California and produces larger flower-heads in greater abundance than older varieties. Flowers are produced on long stems making them particularly suitable for arrangements and cut flowers, and are all semi-double. Spaced at not less than 18-in. intervals for correct development in beds and borders, the best results are obtained by planting first into 5-in. clay pots and sinking the pots into the ground. The following is a selection : `Springtime’, light salmon-pink;
‘Trull’s Hatch’, coral-pink with paler center;
‘Penny’, neon-pink with blue overtones;
‘Electra’, deep red with blue overtones;
‘Surprise’, powder-pink;
‘Modesty’, pure white.

DEACONS (often known as Floribunda Geraniums) Derived from a cross between an ivy-leaf and a miniature, these are more com pact than Irenes and produce many more smaller flowerheads. The development of the plant may be controlled by the pot size: for instance a plant in a 5-in. pot will grow to about 1 ft. in diameter, whereas one in a 15-in. pot may develop to about 4 ft. in diameter. Six of the most popular varieties, all double, are: ‘Deacon Bonanza’, neon-pink;
‘D. Coral Reef’, coral-pink;
‘D. Mandarin’, orange;
‘D. Fireball’, bright red ;
‘D. Lilac Mist’, pale lilac-pink;
‘D. Romance’, purple-mauve with blue tinge.

The former bear relatively small flowers and the petals never fully open, thus looking like rosebuds. There are five varieties, three shades of red, one medium purple and one white with pink edges to the petals and a green center. Cactus varieties have narrow twisted petals rather like quills. Colors range through white, salmon and pink to red, orange and purple.

STELLAR VARIETIES, available in both single and double varieties, originated in Australia. The foliage is star-shaped (hence the name), sometimes zoned but often unmarked, and the flowers are carried on long stems. Plants will grow to over 5 ft. in Australia and California.

2 . Fancyleaf Zonals These are mainly grown for their unusual leaf coloring, the flowers often (but not always) being insig­nificant, usually red, single and sparsely produced. Popular for bedding schemes, they are also widely used for edging borders and to add variety to mixed groups. Leaf color ing ranges from green-and-black, various shades of green, yellow and bronze to red and copper in a variety of combinations. Because they are seldom as bushy as the Irenes or Deacons, a more impressive effect is produced by spacing them 8-9 in. apart. The following six will give an idea of the colorings available;
‘A Happy Thought’, mid-green leaves with cream butterfly mark in the center, flowers red, single;
‘Mrs Pollock’, red single flowers, leaves red, cream and bronze;
‘Mrs Quilter’, pea-green leaves with broad bronze zone, salmon-pink single flowers;
‘Mrs Cox’, leaves green, flowers red, purple and cream;
‘Skies of Italy’, green, cream, purple and orange foliage;
‘Miss Burdett Coutts’, leaves marked green, cream, bronze and pink.

3. Regals (P. domesticum) These are commonly known in Britain and Australia as geraniums and in USA as show or Lady Washington geraniums. They are mainly grown in this country as pot plants and greenhouse plants but they are suitable for outside beds, borders and tubs in sheltered but sunny positions. The older varieties flower for only two or three months of the year but the modern hybrids will continue to flower for at least ten months if grown under correct conditions. Flowering de­pends upon light to a large extent; if the quality of winter light is sufficient they can be flowered throughout the year; if the light is poor they will rest. In their natural environment show geraniums have no dormant period nor do they need one; dormancy is unnatural to them and is produced by adverse conditions.

Colors range from white to near-black through every possible shade and combination of shades (many being multi-colored), except yellow and pure blue. The flowers are usually larger than those of the zonals and the leaves are unzoned. However, there are now at least two varieties with colored foliage. ‘Miss Australia’ has silver-edged foliage and deep-pink flowers; ‘Golden Princess’, has gold and green foliage and white flowers. The following are among the most suitable for greenhouse or outside use:

4. Ivyleaf varieties (P. peltatum) The fleshy leaves of these are shield-shaped. Flowers may be single, semi-double or double. These trailing varieties are mainly used in Britain for hanging baskets, tubs and urns, but are widely planted in other countries in bedding schemes for ground cover. Foliage may be zones or plain, and there are a few fancy-leaved varieties, including ‘Crocodile’, with a mesh-like pattern over the foliage in white or cream. Colors range through white, salmon and pink to reds and purple. The six modern varieties listed below are a vast improvement on the older ones: ‘Sybil Holmes’ (`Ailsa Garland’), rose-pink, double (USA); ‘Blue Springs’, mauve-pink double, upright habit (Continental); ‘Cliff House’, white rosettes with a touch of pink in the center (USA): Jack of Hearts’, bright pink semi-double with scar­let mark on each petal, upright habit (USA); `Malibu’, crimson-cerise with maroon marks and orange flash, double (USA).

5.Scented-leaf varieties There are hundreds of these since they seed readily and produce many forms with only slight variations. The aroma is released when the foliage is brushed or gently pinched with the fingers. In California and South Africa they can make bushes up to several feet in dia meter. The following six will serve as the basis for a collection: geranium ‘Cris­pum’, lemon scented leaves;
‘Dr Livingstone’, finely divided leaves which are rose scented;
‘Fragrans’, nutmeg scented;
‘Graveolens’, leaves rose scented, flowers pink with purple veins;
‘Lady Plymouth’, rose scented leaves, flowers lavender marked with darker veins;
‘Prince of Orange’, orange scented with small pale mauve flowers.

6.Miniatures and Dwarfs These are mostly zonals, double, semi-double and single varieties in colors ranging from white through salmon and pink to reds and purples. This classification covers mature plants normally less than 8 in. high, chiefly grown as greenhouse pot plants but they can be used very effectively in bedding schemes, wall pockets and borders. Cultivation is as for other groups but over-potting should be avoided if maximum flower is desired. They can be flowered throughout the year under the correct conditions. The color range is as for zonals. There are a few miniature regals all with mauve or purple-and-white flowers, and two miniature ivy leaves—
`Gay Baby’, with tiny white flowers, and ‘Sugar Baby’ with pink flowers.

Among zonal varieties are ‘Black Vesuvius’, dark, almost black green leaves and scarlet flowers;
‘Fournier’, black green foliage, scarlet blooms;
‘Kleiner Leibling’, pink flowers;
‘Pigmy’, scarlet double flowers;
‘Pixie’, flowers pink with white centers;
‘Venue’, pink double flowers.
General Culture All geraniums prefer a sunny position, medium loam and shelter from north and northeast winds. They will withstand temperatures between 34°F (1°C) and 2.0° F (49°C), but will not survive frost. Propagation is by cuttings, 3-4 in. long, taken from green shoots, preferably in late July or early August (cuttings from miniatures will be shorter). Over watering should be avoided; plants can easily be killed by an excess of water. Regular feeding with a balanced fertilizer is beneficial, but avoid high-nitrogen feeds including animal manures, which will result in lush growth and few flowers.