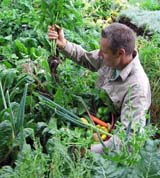 Many newcomers to the Primula world may

be a bit hesitant to try new species and varieties.

The following list includes primulas for a wide range

of habitats and gardening sites. All are easy to grow

and provide the gardener with “starter collection” of

With so many species and, at least twice

that many hybrids, there is a primula for almost every

vulgaris and their many hybrids provide

a splash of spring color in the border or in containers

on the deck. Candelabra hybrids produce a bold, multicolored

splash along a stream, pond or bog garden. Primula

auricula and its many offspring are

ideal for containers, a shady nook in the rock garden

or as conversation pieces in the alpine house.

Though small in stature, P.

frondosa and its relatives are perfect

a variable plant in leaf form and flower

appearance, will cover a shady part of a wall with frosty

green foliage and delicate lavender flowers. For a low

maintenance companion plants to rhododendrons in a shade

equal. The former can be found in numerous flower shapes

and colors, many of which are named varieties. For the

connoisseur, who likes a challenge, there are many rare

and beautiful species that would elicit many admiring

Primula veris is the

“English cowslip” that was once commonly found in pastures

and meadows. It is one of the parents of the modern

polyanthus hybrids. From a rosette of deep green leaves

a reddish spot at the base. Orange, red and russet color

forms are also available. It is an easy, vigorous plant,

with hot summers, shade during the afternoon is desirable.

Seed germinates easily and is readily available from

the native “Primrose” found in Britain, Ireland and

most of southern Europe. This true primrose provides

the parentage for the modern acaulis hybrids. Single,

forms, such as pink and purple, are found on some subspecies.

They need a good, rich, moisture retentive soil and

dappled shade. It is important to keep this and most

other primula species moist during the warm mid-summer

months. Seed germinates readily and is available from

are the delight of the gardener who wants a hardy, colorful

plant for the border. The parents of these hybrids are

The best forms are small mounds of deep green topped

with a variety of flower colors. The plants spread by

a creeping rootstalk and can be easily divided after

flowering. Although flowering times for the different

cultivars vary, most are among the earliest of the primulas.

Since hybrids do not breed true from seed, the gardener

should acquire clones from specialty nurseries and primrose

shows. To be assured of a hardy, proven plant, look

for named clones such as ‘Wanda’ (not Wanda hybrids

‘Snow White’, and many more. Primula sieboldii is a

marvelous delicate-appearing plant for the woodland

or as an underplanting for rhododendrons. Native to

Japan, this plant is available in a multitude of beautiful

forms. Some are named and there are some excellent seed

of pink, red, white and lavender. The outer side of

the petal may even be a different shade than the face.

well in a peat bed or any shady, moist position. As

the ground starts to become dry in the summer, the plant

dies back to an underground rhizome. Plants may be divided

just as the leaves are emerging in the spring or after

flowering. It is easily grown from seed.

the Drumstick primrose is an unusual, versatile, early

spring primula. The flowers emerge before or at the

same time as the large, somewhat coarse leaves. The

round heads of flowers in shades of lavender, through

purple, red, pink and white flowers put on a spectacular

display in April and May. The flower stalks are about

12 inches tall and after flowering, the leaves will

enlarge to 12 inches, so the plant must be given room.

It is easy in a border or anywhere where moist soil

is found. Seed is readily available. The plant can be

divided or propagated by root cuttings.

another large plant for the shady border. The large,

heart-shaped shiny leaves make a good contrast to the

36 inch stems. It flowers freely over a long period

available in color ranges from yellow, through orange

to a red shade. This vigorous plant is dependably perennial

and very hardy. It will tolerate anything from a moist

soil to waterlogged conditions by a pond. However, it

shouldn’t be allowed to dry out in the summer. Seed

ready to be set out in the autumn of the same year.

Whether in or out of flower, Primula

marginata makes a striking addition to the

rock garden. A member of the Auricula Section, it has

fleshy, toothed leaves that are covered with white meal.

In April, masses of violet, lavender, pink or white

flowers appear on three to four inch stems. The leaf

shape and flower color varies from form to form. Primula

marginata and its cultivars are very hardy and make

and are not allowed to become too dry during the summer.

They tolerate more sun than most primulas making them

an excellent choice for the rockery. In hot summer areas,

some shade is beneficial. Some growers prefer in keep

them in pots in a cold greenhouse or alpine house so

the rain does not wash the beautiful farina off the

leaves. Plants are easily grown from seed or from stem

cuttings in March or April.

are the cultivars of Primula auricula. The species parent

leaves. It is a true alpine and requires a cool, well-drained

site. Easier than the species and with a wider color

range are the “garden auriculas.” These hybrids have

a four to five inch rosette of fleshy leaves from which

arises a four-inch flower stalk. The flowers are found

in almost all colors of the rainbow. Garden auriculas

of a border. The soil should be well drained, but should

be kept moist during the summer. In hot summer areas,

some afternoon shade is appreciated. They are also commonly

grown in pots in a cold greenhouse or alpine house.

can also be propagated vegetatively by cuttings in the

For the trough or alpine house, one of

the most charming of the primula is Primula

frondosa. It is a small plant with flower stems

rising to about six inches. The leaves are heavily coated

with white farina. The lilac-pink flowers bloom from

March to May, depending on the weather. In the autumn,

resting bud. Primula frondosa does well in the garden,

providing it does not dry out in the hot summer months.

It will bloom well even in a considerable amount of

shade. Because of the beautiful meal on the leaves,

it is probably best for a situation that has some protection

from rain, such as a cool greenhouse. The seed germinates

readily and plants may also be obtained from divisions.

probably one of the first candelabras in cultivation.

It is one of the easiest of the section, with 36-inch

spikes of flowers in shades from white, pink, red and

almost purple. The flowers form several whorls on the

easily. Plants can be grown in any moist to wet soil

in partial shade where it makes a spectacular display.