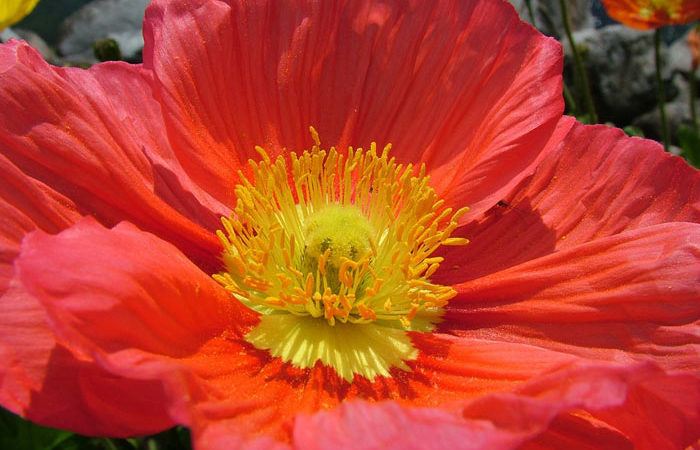 Why should we extol the Poppy? Why note It was the favorite of the old gardens; it is the same choice flower in the newest gardens today. Dancing upon long, wiry stems, the single blooms remind us of hoop-petticoats of silk. The doubles also delight us, as we watch them open day by day pouring forth a great mass of petalage as they break from their tight buds. The colors are exactly the tints most of us admire, and if there be any one of these colors we do not like, we can choose others, for most of our Poppies are sold under variety names.

There are two distinct types of annual Poppies: the Shirley is a form of the Corn Poppy, lately known as the Flanders Field Poppy. The Ranunculus-flowered sorts are double varieties of the Shirley type. (Papaver rhoeas.) The stems are slender and hairy; the flowers are single or semi-double and appear to be made of crinkled silk of the sheerest texture; the pepper-box seed capsules are small but filled with seed.

The stems of the Opium Poppy, Papaver somniferum, are smooth, glaucous, and thicker than those of the Shirley; the plants are taller; the flowers are larger, single, or completely double, and sometimes the petals are much fringed; and the seed capsules are large. Peony-flowered, Carnation-flowered and Tulip-flowered are some of the names applied to the various varieties of the Opium Poppy.

Where to Plant. Of course, Poppies are excellent in beds by themselves or sown in the border, where some other flower has failed. Poppies are like good friends in the garden: they are not mere callers, nor guests who disappoint us.

Some persons believe that Poppies are not good cut flowers. Even a poet has written,

You pluck the flower, its bloom is shed.

But the poet did not know that if he had plucked the Poppy in bud just before it had shed its green calyx, it would have lasted well in water. Poppies are exquisite cut flowers when cut properly.

Opium is obtained from the juice of the Poppy which coagulates upon the stems when they are injured. Harvesting of opium takes place about the middle of March. At the turn of the 20th Century, fresh opium was sold to merchants at the rate of fourteen Egyptian ounces to the rottle (rottle equals twelve English ounces). The merchants shape it into round disks, each weighing from two to three grams. These disks are brushed with the white of an egg to present a better appearance. Dry, pure opium is black-red, resembling cooked coffee.

On breaking it shows a soft, compact fracture. It is often adulterated with lentil flour or mixed with “mor higasi,” a gum from Hedjaz. Regarding Flanders’ Poppy, the following note appeared in Gardening Illustrated (Eng.)

There can be little doubt that the variety is Papaver rhoeas, which, according to Loudon, was cultivated along with P. somniferum in Flanders and Germany for their seeds, which are bruised for an oil and in cookery as a substitute for that of Olives. The reason it was chosen for Remembrance Day was, possibly, from the fact that, as the two Scottish Moderators, Dr. Brown and Sir George Adam Smith, were riding together behind the lines, and as the sun sank westward in a glory of color, lighting up the stretches of Poppy flowers, Sir George, pointing to the Poppies, said to Dr. Brown, “Without shedding of blood is no remission.”-Heb. ix., 22. Even in wartime it made the Autumn glorious, and covered with its flame of color all the scars which war had made in the landscape and where so many brave young lives were laid away in the earth. It seemed, that Autumn day, as if their young life had burst its prison walls and poured in a flood of scarlet on the face of the land.

Some readers may desire to know the history of Shirley Poppies, as it shows what may be done by patient work and application. Reverend W. Wilkes, the secretary of the Royal Horticultural Society, first discovered in a patch of the common field Poppy in his garden, one with a thin edge of white and with yellow stamens. Ordinarily the star stamens are black or very dark and the dark pollen musses and disfigure the flower when it ripens.

He saved the seed of this Poppy, planted it, secured a number of plants with the white edge more pronounced and with the yellow stamens. Saving from these types and discarding the black-centered plants he developed the present Shirley Poppy with its delicate satiny pinks and roses and even mauve and lavender shades and all with the light centers. It required a number of years and careful selection before the dark-stamened varieties was eliminated and the strain fixed, but now a packet of Shirley Poppy seed comes true.

GENERAL. Poppies are extremely hardy annuals so that the seed may be sown in the Fall, in the Winter upon the snow, in the early Spring, or in the Summer to extend the season of bloom. However, the seeds germinate best in cool soil.

As Poppy seed is very fine, it must be sown thinly. This is best accomplished by mixing sand with it. After sowing, it is best not to place soil over the seeds, but to cover the bed with a cloth or with grass clippings. The covering may be removed as soon as the seed has germinated, but until then it shades the seed and keeps it from drying out.

Thin the plants to stand 6 to 8 inches apart. The seedlings do not transplant readily. Poppies will bloom for a short time only if the seed pods are allowed to develop.