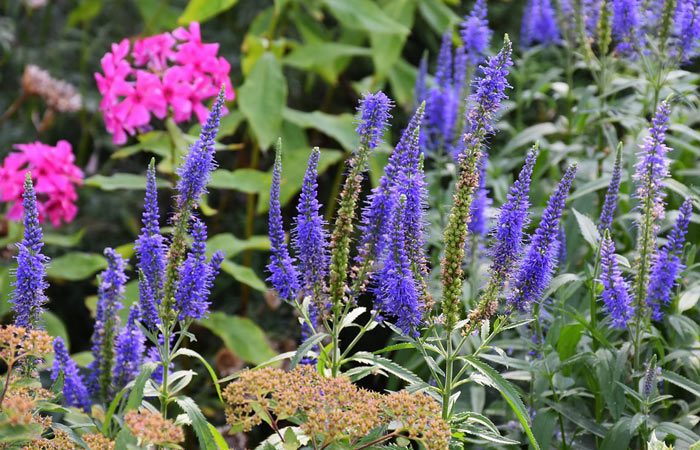 When Christ was laboring beneath the heavy cross, He faltered, and a maiden, St. Veronica, rushed forward to wipe the perspiration from His brow. The impress of His face was found upon her napkin. Such is the story of St. Veronica, and because the markings of some species of Veronica resemble a face, this flower was named after St. Veronica. It is a pretty story and one we recall when looking at this flower. Veronicas are excellent border and rock garden subjects. The diversity of the species render them of use in many spots.

SPECIES. Veronica longifolia subsessilis. Japanese Speedwell. This is, perhaps, one of the most attractive of all blue-violet flowers for the border. The long spikes of bloom are feet tall and are produced through July to late September.

V. incana seldom grows over a foot tall and besides having amethyst-blue flowers, it has gray foliage. It blooms in July and August.

V. Teucrium rupeslris and V. repens are dwarf, trailing sorts carpeting the soil with green and covered with pale blue flowers in May and June.

UTILIZE. As already stated the Veronicas are superb for the perennial border and the rock garden. V. Teucrium rupeslris and V. repens are also good ground covers for dry banks or graves. The taller sorts are good for cutting, especially Y. longifolia subsessilis.

GENERAL. Veronicas are of easy culture; they usually prefer moist soil. Although they grow in poor soil, some fertilizer in the form of bonemcal will increase the size of the spikes. They generally prefer full sun, perhaps with the exception of Y. virginica and Y. repens.

PROPAGATION. The plants are easily divided. Seeds may be sown and some sorts root when the branches touch the soil