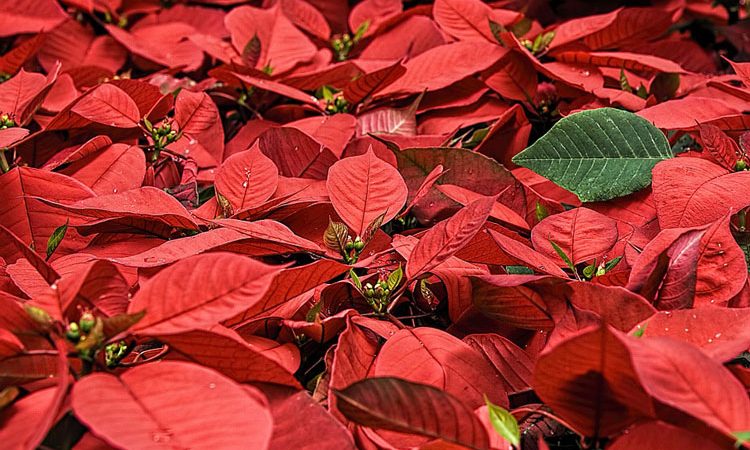 Are you a trivia buff? If so, perhaps you’d be interested in knowing a little bit more about the poinsettia plant you buy every Christmas.

For example, did you know that the poinsettia’s main attraction is not its flowers, but its leaves? The flowers of the plant are the yellow clustered buds in the center. The colored leafy parts are actually bracts or modified leaves.

Red is the most popular color, accounting for roughly three-quarters of all sales nationwide, followed by white and pink. Poinsettias come in a variety of colors from red, salmon, and apricot to yellow, cream, and white. There are also unusual speckled or marbled varieties like “Jingle Bells” and “Candy Cane” with several colors blended together. New varieties are introduced yearly with even more variation in height and colors.

How many poinsettias do you think are sold in a year?

Although every state in the United States grows poinsettias commercially, California is the top producer with about 27 million pots grown, followed by Texas, North Carolina, Ohio, and Michigan, each with about 14 million pots.

Did you know that in the wild, the poinsettia can reach heights of 12 feet with leaves measuring six to eight inches across? It is actually a small tropical tree belonging to the Euphorbia plant family. Its botanical name is Euphorbia pulcherrima although in English-speaking countries it is more commonly known as the poinsettia. A native of southern Mexico, the poinsettia blooms in December and has been used in that country to decorate churches for centuries.

In the fourteenth to sixteenth centuries, the Aztecs used the poinsettia leaves to dye fabric for clothing and the sap for medicinal purposes, including to help control fevers. They also considered the red color a symbol of purity, and so poinsettias were traditionally part of religious ceremonies.

You probably know that Dr. Joel Roberts Poinsett, an amateur botanist and first United States ambassador to Mexico, introduced the plant that became known as the poinsettia to this country. He discovered a shrub with brilliantly colored red leaves growing by the side of the road in Taxco, Mexico, in December 1828 and sent cuttings home to his plantation in Greenville, South Carolina.

But did you know that most botanists at that time dismissed the poinsettia as a weed? Fortunately, Poinsett continued to study and breed this plant in his greenhouse, sharing plants with his horticulturist friends. It soon gained acceptance as a holiday plant, despite its very short bloom time. It wasn’t until the 1960s that researchers were able to successfully breed plants to bloom more than just a few days.

Here’s another bit of interesting trivia. December 12 is National Poinsettia Day. Never heard of it? Believe it or not, the United States has observed this official day since the mid-1800s. It honors the man and the plant he introduced. Poinsett died Dec.12, 1851.

True or False? The poinsettia is a poisonous plant. If you answered false, you’re correct. The plant has been tested repeatedly and cleared of this charge by the National Poison Center in Atlanta, Georgia, and the American Medical Association. The POINSINDEX Information Service, the main information resource for poison control centers across the country, reports that even if a 50-pound child consumed more than 500 poinsettia bracts–the amount tested in scientific experiments–the consequences would not be fatal. Even at this high level, no toxicity was found.

However, this doesn’t mean that poinsettias are meant to be eaten. If ingested, this plant can cause stomach irritation and discomfort. Cats and children also may choke on the fibrous parts, so be sure to keep these plants out of their reach. The sticky white sap also may cause skin irritation for some people.

Do you know the best way to prolong the life of this Christmas plant? Avoid hot or cold drafts, keep the soil moist not soggy, and place in a room with sufficient natural light and temperatures of around 60 to 70 degrees F. Water when the soil begins to dry. Once the leaves begin to wilt, it’s too late.

Above all, protect it from exposure to wind or cold on the way home from the store. Poinsettias are highly sensitive to cold temperatures and even a few minutes of exposure to 50-degree F or lower temperatures will cause them to wilt. But when cared for properly, poinsettias usually will outlast your desire to keep them!