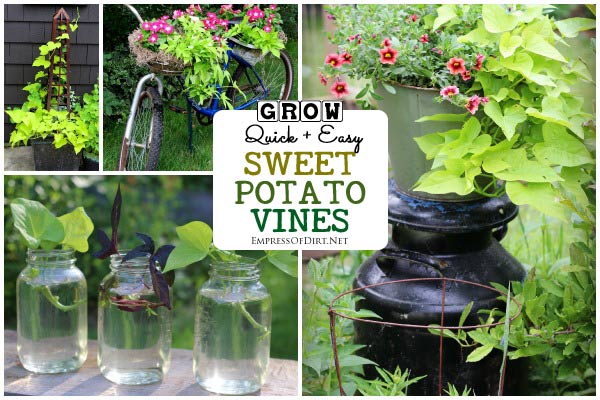 This favorite American vegetable is really a kind of Morning Glory, botanically Ipomoea Batatas, but in cultivation in the United States it rarely produces flowers. Its wild progenitor is a native of tropical America, which accounts for the fact that the Sweet Potato is a crop that thrives best where summers are warm and comparatively long. Sweet Potatoes may be cultivated without difficulty in southern New Jersey and southwards, and home garden crops can be produced on Long Island, New York, and even further north provided they are planted in sheltered locations and in light, well-drained soils.

Unlike the common Potato, or Irish Potato as it is often called, the Sweet Potato is not propagated by planting tubers or pieces of tubers. Instead, rooted sprouts (young shoots) are taken from tubers started in hotbeds and are planted in the garden after both soil and weather are really warm. These sprouts or “draws” are produced commercially in vast quantities by specialists and, because in their young stages they are tricky to handle, the home gardener is wise to buy the draws he needs for planting, rather than to attempt to raise his own.

Sweet Potatoes thrive best in very sandy soils; they are unsuitable for planting in clay soils or in mucks. In preparation for planting, the soil should be plowed or spaded and, if fertilizer is needed, the application of one low in nitrogen should be made. Excessive nitrogen results in vigorous vine growth at the expense of tuber development. Because of this it is often considered better not to fertilize at all before planting Sweet Potatoes but to set them in ground that was well fertilized for a previous crop.

Planting should not be done too early. In southern New Jersey the last week in June is time enough; further south, earlier dates are appropriate, as early as the first week in March in Louisiana, and in early April in southern California. In the South, Sweet Potatoes should be planted in rows 4-5 ft. apart with distances of 20-24 in. allowed between plants in the row. In the North they may be set considerably closer, a spacing of 2 1/2 ft. between the rows and 15 in. between the plants in the rows being sufficient. The plants may be planted on the flat or the soil may be hilled up to form ridges and the plants set in these.

Varieties suitable for northern gardens are the drier-fleshed ones, of which Yellow Jersey and Big-stem Jersey are among the best; for southern gardens the moist-fleshed varieties are preferred. These include Nancy Hall, Porto Rico, Pumpkin and Yellow Belmont.

Once Sweet Potatoes are planted they need little attention. In their early stages frequent shallow surface cultivation to destroy weeds and promote growth is necessary, but once the vines cover the ground this can no longer be done. It is advisable to move the vines occasionally during their early growth to prevent them from rooting into the ground.

Harvesting should be done at the end of the growing season or as soon as the vines are touched by frost. At the first indication of frost damage, immediately cut off all the vines to prevent the tubers from being spoiled by juices that run back from the frost-killed vines, and then proceed to dig the tubers. A fork is a suitable tool to use for this work. Great care must be taken not to damage the potatoes when digging or during subsequent handling. Cuts and bruises not only mar the appearance of the tubers but encourage the development of rots caused by fungi.

After they are lifted, the potatoes are left on the ground surface until they are dry, which, on a bright day, will not take more than an hour or two, then they are sorted and carefully placed in bushel baskets or boxes.

Sweet Potatoes are not an easy crop to store. To ensure good results the crop must be thoroughly mature at the time of digging and must be handled in such a manner that the tubers are not cut or bruised. In addition the tubers must be well “cured’ soon after digging and must then be stored in a uniform temperature of 45-55 degrees.

Curing is effected by keeping the tubers in a temperature of 80-90 degrees (usually maintained by the use of artificial heat) in a well-ventilated storage house. The length of time required to complete curing depends upon the variety and upon weather conditions. Experienced persons can judge by the “feel” of the potato when the curing process is completed. The inexperienced may be guided by the appearance of young shoots on the tubers in the warmer part of the storage place; when these are seen, the temperature should be lowered gradually to 50-55 degrees.

Where only a few bushels of Sweet Potatoes are to be stored they may be placed in bushel baskets or crates, cured near the cellar furnace and then kept in a dry place where the temperature remains fairly constant, 45-60 degrees.

Sweet Potatoes make attractive and interesting house plants. The usual method is to obtain a mature tuber (one that has not been heat-treated before marketing to the extent that it will not sprout) and stick three toothpicks or similar slivers of wood in a circle around its sides in such a way that they protrude at right angles. The tuber is then lowered into a glass jar or other container of water (it is well to add a few pieces of charcoal to the water) until the toothpicks rest on the rim of the container and support the Sweet Potato. The water should be maintained at such a level that it always touches the bottom of the tuber. It is advisable to change the water occasionally.

If the jar and Sweet Potato are kept in a sunny window in a warm room green, leafy, vinelike shoots will soon develop from the tuber. These may be trained to stakes, strings or wires or the jar may be suspended and the shoots allowed to trail downward. Similar results may be had by planting a Sweet Potato tuber in a pot of soil and keeping the soil moist.