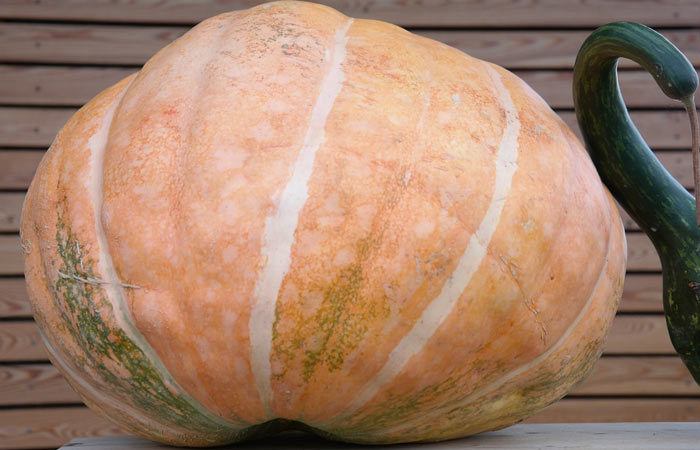 To the four-minute mile and the eight-foot high jump, add yet another legendary performance barrier, shattered just last Saturday: the 1,000-pound pumpkin.

For fans of gargantuan gourds, the wonder is that it took so long. In 1994, when Herman Bax of Lyn, Ontario, grew a prize-winning 990-pound Atlantic Giant pumpkin, it seemed likely that the 1,000-pound mark would fall quickly — especially since record-sized fruit of this hybridized plant had nearly doubled in weight during the previous decade. But then in 1995, Paula Zehr of upstate New York won top the year’s honors with a mere 963- pounder. When would improvements in seeds and growing techniques result in the half-ton triumph?

Befitting such a blend of nature and technology, the news that not one but two giant pumpkins had tipped the scales above the magic 1,000 level was spread first via Web sites created and maintained by enthusiastic growers attracted to this weighty pursuit.

“The fascination is in the experience of watching a plant grow so fast — 20 to 30 pounds a day,” said Dan Gardner, whose World Class Giant Pumpkins site is accurately billed as “the Internet starting point for learning about World Class Giant Pumpkins.” On Saturday evening, from weigh-off data posted on his site for one of the competitive associations, the Great Pumpkin Commonwealth Results page, the world learned of the 1,006-pound pumpkin, as big as a kitchen stove, grown by a 64-year-old retired gardener, Bill Greer of Picton, Ont.

To fully appreciate the hard work and high stakes involved in the competitive world of giant pumpkin growing, browsers may want to linger at Gardner’s site, which the Appleton, Wis., electrical engineer created a year ago to provide pumpkin information on the Internet. Here he offers a lengthy news feature from the Philadelphia Inquirer Magazine, titled 1,000 Pounds or Pie, by Michael Vitez; links to The Travels of a Pumpkin, a brief tale of Herman Bax’s 990-pounder; and to Barry DeJong’s ’94 Diary, the epic struggle to raise a 945-pounder — as well as to Gardner’s own online diary complete with photos of Dan’s Pumpkin, which weighed in on Saturday at 291.5 pounds.

“A lightweight, it barely escaped being the runt of the show,” Gardner said.

The new record holder won its thirtysomething growers a $50,000 prize at the Great Pumpkin Farm, near Buffalo, where it will remain on exhibit until Halloween. Meanwhile, the 1,006-pound Canadian pumpkin is being shipped to California for a fall festival celebration. (Mainstream media lagged on this fast-breaking news; for instance, CNN Interactive’s Web site didn’t post its story Half ton pumpkin wins contest until late Sunday afternoon).

The Atlantic Giant Pumpkin site, chock full of information for devotees of the orange pachyderms, includes Frequently Asked Questions on Atlantic Giant Pumpkins and secrets of Atlantic Giant Growing Techniques, detailing the germination, pollination, fertilization, care and watering (pumpkins are 95% water) needed for a barrier-shattering behemoth. The site is maintained by Duncan McAlpine of Seattle, a Boeing engineer whose own Atlantic Giant weighed a mere 208* on Saturday, but was nevertheless honored with the title of “ugliest pumpkin” in Washington State.

McAlpine’s pumpkin pages are actually part of a larger gardening site seeded by his original home page, which was produced to promote the Mt. Tahoma Rock Garden Society. Now his Web pages are organized according to the divisions of his home garden, diagrammed on The Pacific Northwest Climate Garden page. Still, giant pumpkins are clearly his favorite flora; just look at his page of Atlantic Giant Pumpkins Clipart, with 47 downloadable files of colorful pumpkin graphics collected from around the Net. Potential converts to the giant pumpkin way can even view Giant Pumpkin Trading Cards commemorating champions of past years, posted by an Ontario grower, Gus Saunders, whose Farmer Gus’ Ottowa-St.Lawrence Pumpkin Growers Home Page includes his picture, with the caption: “Farmer Gus says ‘I never met a pumpkin I didn’t like!”

Anyone sharing that sentiment should go directly to Howard Dill’s Giant Pumpkins page where Dill, “The Pumpkin King” who has been hybridizing Giant Atlantics for the last 16 years, offers his prize-winning seeds for sale.

The Pumpkin King’s Web site is festooned with a cartoon of a little boy surrounded by dozens of pie pans, exclaiming: “Oh mom! not pumpkin pie again!” While many giant pumpkins grown for the competition will end up as compost, growers looking to use the fruit of their labors in something other than pie can also find alternatives on the Net on a page devoted to 45 Fun Recipes for Pumpkin.

Following are links to the external Web sites mentioned in this article. These sites are not part of The New York Times on the Web, and The Times has no control over their content or availability. When you have finished visiting any of these sites, you will be able to return to this page by clicking on your Web browser’s “Back” button or icon until this page reappears.

Back to My Garden