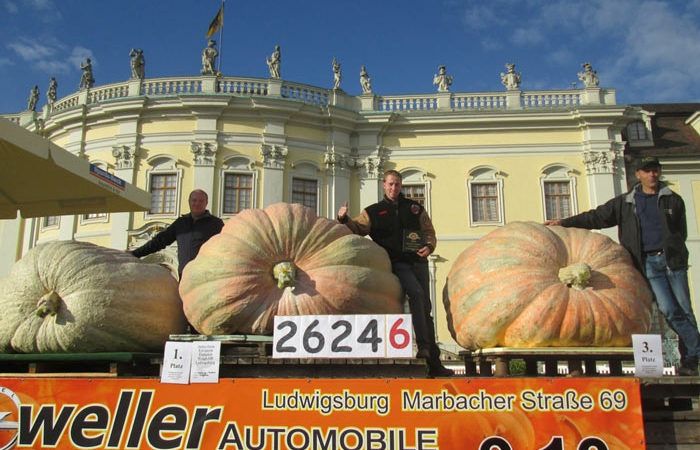 Welcome to the original pumpkin record page. This is the official page identifying the heaviest pumpkins in the world per country.

Scroll to the bottle of the page to see the country giant pumpkin records. It will list by Country, State or Provence the heaviest pumpkin for that region.

It takes a lot of time and effort to grow these huge pumpkins. The majority of these pumpkin growers have failed during the growing process. One of the factors in growing a large pumpkin is the seed, watering, burying the vine node, and removing other pumpkins on the plant.

Let’s take a look at our current 2020 Top 10 pumpkin growers.  If you want to see the pumpkin records, please scroll down the page. 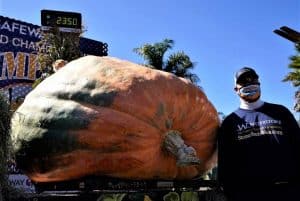 Travis Gienger, from Anoka, Minn., poses next to his pumpkin, which weighed in at 2350 pounds, to win the Safeway World Championship Pumpkin Weigh-Off in Half Moon Bay, Calif., Monday, Oct. 12, 2020. Associated Press 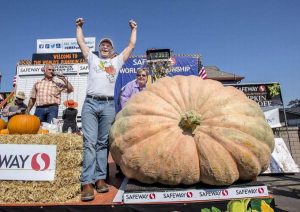 Joel is the grandfather of all the pumpkin growers. Joel has been growing pumpkins for 25 years and each year he knocks one out of the park. This personal best was grown in 2017 and was weighed in at the Half Moon Bay Weigh-off.  Most of the West coast growers take their pumpkin to Half Moon Bay for the prize money.  I wonder how much Joel made with this beast of a pumpkin. 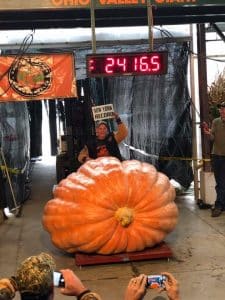 Karl has some secret that he isn’t telling anyone.  He has two pumpkins in the Top 10.  What do you think it is?  Seeds or just plain luck.  I don’t know but I wish I knew.  This is a 2018 pumpkin that was weighed by Ohio Valley Giant Pumpkin Growers Weigh-Off.  Karl grew it at Clarence Center New York 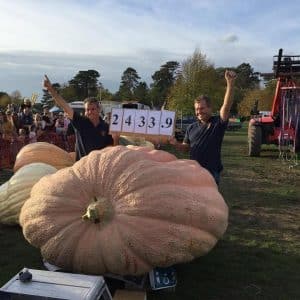 Ian & Stuart are from Lymington, UK. This is the largest pumpkin to date grown in the United Kingdom.

This massive pumpkin would make one gigantic jack-o’-lantern. The giant pumpkin weighed in at 2433.9 pounds was grown by Ian and Stuart Paton, twin brothers from England.

The brothers who planted the pumpkin in a greenhouse in April said it was the first time they used peat moss instead of organic manure as fertilizer. The twins run the Pinetops nursery in Lymington, New Forest. 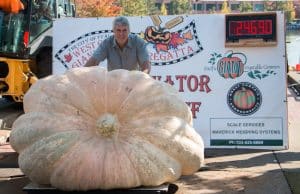 Steve is a seasonal grower who constantly grows massive pumpkins.  This 2018 pumpkin was grown in Pleasant Hill OR, winning the 2018 Terminator Weigh-Off! Steve’s pumpkin weighed in at a whopping 2,469 pounds.  Have you ever tried to float a pumpkin and paddle it across a lake? It’s regatta time at the West Coast Giant Pumpkin Regatta. 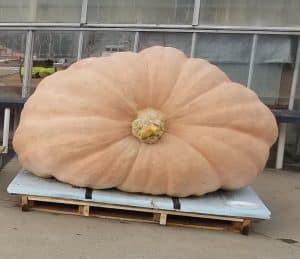 What?  Does Karl have another massive pumpkin?  Amazing.. This pumpkin was also grown in Clarence Center New York in 2019. Pumpkin growers belong to the  Great Pumpkin Commonwealth pumpkin to compete with others with impressive pumpkin weights. 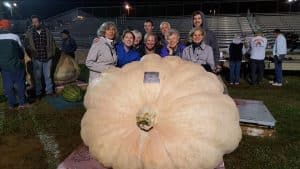 As we approach the end of the Top 10 pumpkins, Steve grew this 2018 pumpkin in Boscawen, New Hampshire. Per the photos, we see a lot of happy people dwarfed by the huge pumpkin.  The pumpkin was weighed at Deefield Fair 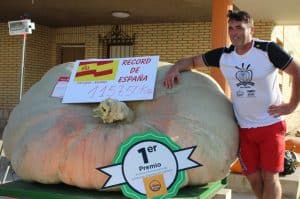 On September 12, 2020, the XII edition of the international giant pumpkin fair was held at the Oasis de Bardenas hotel in Valtierra. Once again the Valtierrano Rubén Mendi prevailed, who in addition to achieving the Spanish record, managed to place his pumpkin as the second heaviest in the world.

He enjoys the hobby of growing large pumpkins and has impressed Spain by winning a contest with a giant specimen weighing 1157.9 kilos. 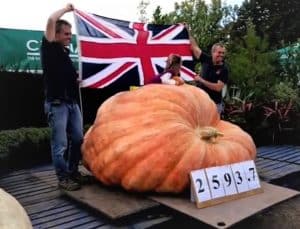 A pair of twins have grown UK’s biggest pumpkin weighed in at a whopping 2,593.7lb- heavier than two polar bears.

Ian and Stuart Paton, 59, from Lymington in Hampshire’s New Forest National Park, have beaten the previous UK best of 2,433lb and narrowly missed out on the world record by just 31lb.

One unique issue about this pumpkin, it was grown in a greenhouse versus outdoors. 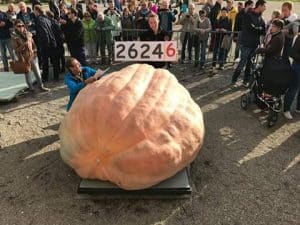 If you have a giant pumpkin record, and you would like to see your country listed, please send me an e-mail.

Of course, your pumpkin must be weighed on a certified scale. I won’t accept a photo of five bathroom scales or some other funky method.

Records apply to the location they were grown. If you grew the pumpkin on the four square, sure, I’ll give you credit for each State. Hopefully, the growers live in the same place as they grow their pumpkin. If you live in one state and you grow the pumpkin in another state, your record will be listed with a footnote describing your record. Email me with your stats, mcalpin1 @ yahoo.com

If you’re viewing on a mobile device, please scroll from the right to the left to see all the data.

Pumpkin Records from around the World

List of the largest pumpkin grown in that location of the World.

[1] Pumpkin was grown in Virginia, but the grower lives in North Carolina