All poem’s are copyrighted. Request to publish any poem requires permission by Tony Hickman. Additional Educational Pumpkin Poem’s are on this link. If you would like to see how my pumpkin patch is doing this 2001, please stop by. 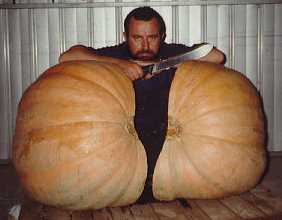 It looked secure in the back of the car
After all its not going far
Go easy on the brakes, my wife said
It might roll forward and we’ll all be dead

It hit the back seat with one hell of a thump
My wife opened the door and was ready to jump
Just hang on to it, and get back in the car
We’re nearly there, its not that far

A little bit further I heard my daughter beg
Help me dad its squashing my leg
And the stem is tangled in my hair
Just hang on we’re nearly there
I got to the weigh-off just in time
My family was shaken but they’ll be fine
My pumpkin got there without a scar
Just as I planned, because it wasn’t that far.

I’ll sacrifice anything, I don’t care what the cost
To keep away the killing frost
A salmon or trout or even a sturgeon
Because I’m damned if I can find, a young blond virgin

R.I.P.
Around my garden
Are some large tombstones
Lasting reminders
Of the pumpkins I’ve grown

I stepped back and covered my face
After all that work ,I’m out of the race I went to the house and rolled a smoke
I told the kids, they thought it was a joke

But they knew it was true because my face was pale I opened the fridge and downed an ale I’ll call my mate, he’ll know what to do “Your joking” he said” That can’t be true”
“Pick it now, get it out of your patch
The bugs will get in, lay eggs and hatch
Get it out of there, the place it was born in And we will fix it up tomorrow morning”
I couldn’t lift it by myself
So I sent the kids to get some help
The neighbors came, “You want to lift something” “Yes, I need a hand to move my pumpkin”
“Do it yourself, you don’t need four” “Are your wives busy, we might need more”
We went to the garden, I showed them my prize They stood in awe,
couldn’t beleive their eyes
So I got a tarp and we gathered around
“We’ll get it in the middle, then lift it off the ground”
My sick neighbor, he had a bad cough
Grabbed it by the stem and snapped it right off

I nearly cried and I said a rude word Loud enough that the whole world heard
He looked at the stem, it was long and fat
Then he thew it away, he said “You can’t eat that”

I finally calmed down, though my face was still red “Just lift it ” I
snapped, and get it into the shed It was still in one piece, in its
bright orange glory And my neighbor is still alive,to pass on the story

So I told him the story, he said “You know what I think”
‘You shouldn’t move pumpkins when you’ve had too much to drink “But it was after my neighbor had snapped off the trunk
That I had a few drinks and maybe got drunk

Let this be a lesson, to everyone
Don’t plant too early, don’t jump the gun Take it slow, don’t go full throttle
Or you’ll be drowning your sorrows, in the bottom of a bottle

The Mighty Mable
Now heres a true story, its not a fable
Its about a pumpkin, the Mighty Mable
There’s this average guy like you and me
Who goes by the name of Wayne Hackney

He had this idea of making somethin
So he made a boat from a giant pumpkin
He grew a beauty, weighed 729 pound
She was big and orange and 172 inches around

They went to the marina,to consult an old boater
To how they’d fit the outboard motor
They cut a hole in the top, but she still looked handsome
Made an internal frame and fitted a transom

Fitted a three horsepower motor, so it wouldn’t lag
And added a windsheild and the American flag
Then came the day to see if they could
Sail Mighty Mable across Lake Candlewood

Three hundred people had gathered around
He had to do it, he couldn’t back down
They opened the champagne and christened the boat
And prayed to the lord that Mable would float

In an orange tuxedo and a green top hat
They braved the water, but it wasn’t flat
The waves swamped them before twenty feet
It looked like it was over, like he was beat

But he had to do it for the crowds sake
So he tried again on the other side of the lake
After a quick repair because he found a hole
He was ready for action, ready to rock and roll

So he and Mable were back in the drink
Please Lord don’t let me sink
He went out on the lake and turned 360 degrees
The crowd all cheered, they were really pleased

She was holding together like bricks and mortar
But then the waves crashed in and she was taking in water
The motor couldn’t take it, it stalled twice
He crossed his fingers and prayed to Christ

Now it was time for some fast action
A voice in his head said “She’ll not take it Captain”
So the motor came off, it couldn’t take any more
And he finished the journey with his trusty oar

Two miles he traveled in his Cucurboat
And they said it can’t be done, it will never float
After the champagne and a nice cold beer
He had a great idea for the following year

I’ll get a big 150 horsepower motor
And a huge pumpkin, a real good floater
I’ll get my wife in her polkadot bikinis
To ski behind the pumpkin on two zucchinis

And there’s one thing I haven’t mentioned
Wayne Hackney…..your a living legend