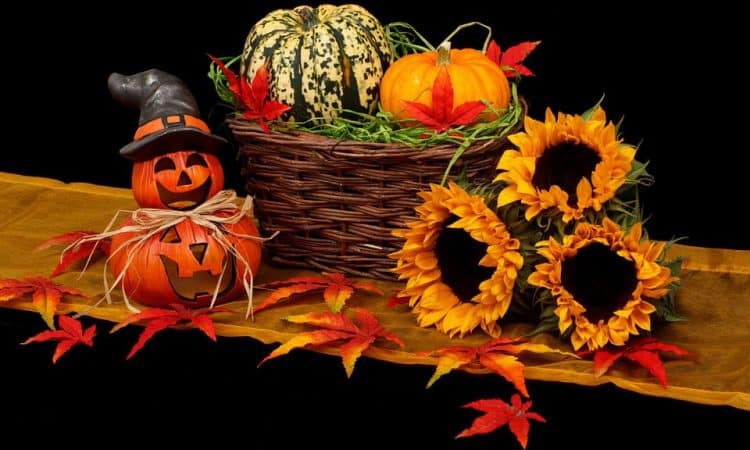 What would Halloween be without pumpkins for jack-o-lanterns and decorations? Although this is the plant most often associated with Halloween today, it may surprise you to know that in the past other fruits and vegetables had strong connections to this holiday.

In England and Ireland, Halloween lanterns were originally carved out of turnips and large beets. Faces of demons were cut into the vegetables then a glowing coal was placed inside. People carried these lanterns around the village or left them burning on doorsteps to frighten away evil spirits.

When the Irish immigrants arrived in America, they found pumpkins abundant and much easier to carve than turnips. And thus, the tradition of turning pumpkins into jack-o-lanterns began.

The custom of decorating with apples, pumpkins, cornstalks, and autumn leaves has its origin in an ancient Druid autumn festival called Samhain (pronounced SAH-win). The festival celebrated the end of summer and a successful harvest.

Today apples also are used in a popular Halloween party game bobbing for apples and are often given out to treat-or-treaters. But during the Victorian era, the apple was more than just an edible treat. It played a significant role in determining a young girl’s future. By slipping an apple under her pillow on Halloween eve, she was sure to dream of her sweetheart.

Apples also were used to foretell the identity of the man she was to marry. At midnight on Halloween, a girl would stand in front of a mirror and brush her hair three times while eating an apple. The image of her future husband would appear in the mirror over her shoulder.

Once she saw his face, she peeled an apple in a single strip. She tossed the peel over her left shoulder using her right hand. The peel would form the first initial of his name. A popular rhyme at the time went as follows:

“If your future hubby’s name you wish to know, Over your left shoulder an apple peel throw. It will wriggle and coil, and you will see The first initial of who it will be. For the witches plot, and the hexes scheme On the mystic night of Halloween.

If a young maiden couldn’t choose between two suitors, on Halloween night she took a pair of hazelnuts, and giving each for one of her beaus, she then tossed them in the fire. The nut that burned the brightest or popped the loudest indicated which man was to be hers. In England, this night became known as Nutcrack Night.

Throughout the years, other plants and herbs also were associated with this holiday. In Mediterranean countries, prior to the fourteenth century, rosemary was placed over the cradle of babies to protect them, not just on Halloween, but year round. It was often burned with juniper and thyme as a means of cleansing a room of witches and bad spirits. Rue was hung from doorways and windows to ward off evil spirits and prevent them from entering the house.

Salvia, which is also known as meadow sage, was considered a symbol of immortality. When planted on graves in cemeteries, this perennial was believed to give the dead “eternal life.”

By By Lisa Halvorsen n Garden Editor University of Vermont