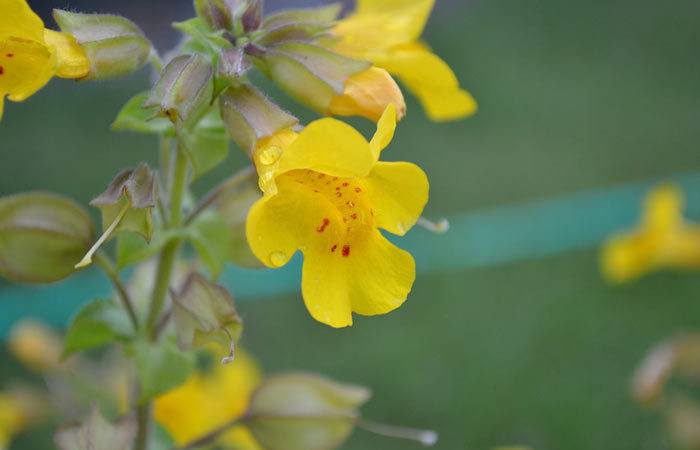 (Name from Mimo, an ape, refers to gaping mouth of flower)

The flowers of this interesting genus are curiously shaped and spotted with contrasting colors. Those generally seen are bright yellow, spotted with maroon, red or orange. a:

Mimulus moschalus is the Musk plant, so-called because of its musk-scented leaves. It is really a trailing perennial with yellow flowers, but it can be grown as an annual. M. luteus, the Golden Monkeyflower, variously called in catalogs, tigrinus, cardinalis, and grandiflorus, is a large flowered sort with yellow, gaudily spotted blossoms. Both sorts grow a foot tall.

Where to Plant. The Monkeyflower is grown for its brilliance of color, which is attractive. They are effectively planted in hanging baskets or in the border where the soil is moist.

Apparently many of the Muskplants grown lack the characteristic odor of musk. The Monkey flowers are adapted to cool regions and may be grown in pots in cool greenhouses.

GENERAL. As the seed is very small, the plants had best be started indoors fairly early in the Spring. Keep the seed pans constantly moist but not wet. Transplant the seedlings when quite small, in tiny clumps and thin them out later. Transplant to the open only when the soil is warm. These plants prefer partial shade and, as stated above, like moisture. Some housewives who grow the Musk plant for Winter bloom, stand the pots in a dish of water.

Cuttings may increase the Monkey flowers. Take slips of the young growth and place several in a small pot of sandy soil. Shortly they will root. When they begin to crowd they may be repotted into larger pots.