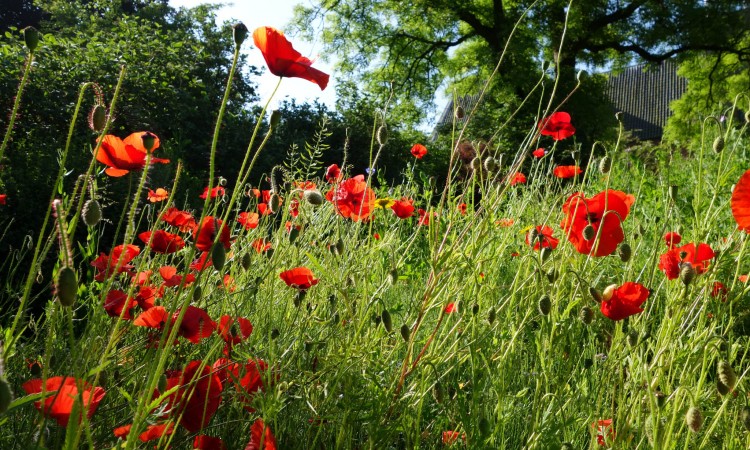 It is a peculiarity of an
Iris lover that he does not like to have an Iris called
a Flag, although most persons call these flowers by
that name. With the advent of new varieties the Iris
is gaining in popularity from year to year. A national
society honors this flower and many cities have Iris
clubs. The exquisite colors and the unrivaled form have
attracted many flower lovers. A collection of the varieties
is a veritable rainbow of soft colors.

BEARDED, or GERMAN IRIS.
The most cultivated group of Irises are the bearded
sorts, all of which have thick, fleshy, underground
stems rendering their increase most easily accomplished.
They are remarkably well adapted to different situations.
They do well in hot, dry, sunny places as well
as the cooler and damper spots. In the shade they are
not at their best. They require frequent transplanting,
as the clumps soon become too thick.

JAPAUESE IRIS. Gorgeously
colored and giant ni size the Japanese Iris (I. laevigata)
will become more popular in the future, for now the
Japanese names have been translated and the flower buyer
may be sure of the sort he buys from the nurseryman.
Unlike most Bearded Irises, the Japanese Iris is a flat
bloom, the leaves are narrower and the rhizomes are
smaller and more compact. They delight in water when
in bloom but not at other times during the year.

SIBERIAN IRIS. For the margins
of pools, where the soil is a trifle too damp for other
flowers, the Siberian Iris (I. sibirica) thrives. It
will not succeed with its roots in water, however. The
flowers are rich purple, light lavender, blue or white,
and like the Japanese Iris, these flowers are without
the prominent beard found in the Bearded Iris.

WATER IRIS. There are two
common sorts of Iris which may be planted directly in
the water; namely, the European Wild Flag (I. pseudacorus)
and the Blue Flag (I. versicolor). The European Wild
Flag has large, yellow flowers, the petals of which
are drooping. The flowers appear among the luxuriant
leaves. The Blue Flag is a familiar flower to most Americans,
for what boy or girl has not gotten wet feet gathering
it? Both of these sorts will thrive in ordinary garden
soil without a great quantity of water.

DWARF IRIS. In April, during
favorable early Springs, we are delighted with the various
dwarf Irises. Growing about 6 inches tall they supplement
the Spring bulbs. Especially charming are the purple
dwarf sorts when planted in front of Emperor Narcissus.
I. pumila is the dwarf bearded species; I. verna and
I. cristala are beardless sorts. The latter sort is
very tiny and has very slender creeping rhizomes. Being
sensitive to too much moisture, it grows very well when
planted upon little mounds of soil or in perfectly drained
spots.

INTERMEDIATE IRIS. Hybridists
have crossed the tall Bearded Iris with the dwarf bearded
sorts to produce a group intermediate in season and
height between the two parents.

UTILIZE. The use of Iris
has been suggested in the foregoing paragraphs. It is
an excellent border subject and for home use the flowers
are attractively arranged in our rooms. There are wet
soil,sorts, tall varieties, very early kinds and all
types of bloom to attract each of us.

GENERAL. The simple,
let-them-alone, culture of the Iris is gratifying to
the home owner who is not a careful gardener. They do
not like water upon their crowns in Winter, except where
noted. The bearded sorts are said to like lime; the
Japanese Iris does not prefer a limestone soil.

PROPAGATION. Merely cut up
the old clumps to propagate them. Each piece will grow,
even if allowed to lie about the garden for a week without
planting. The Bearded sorts increase rapidly and should
be divided every three years.