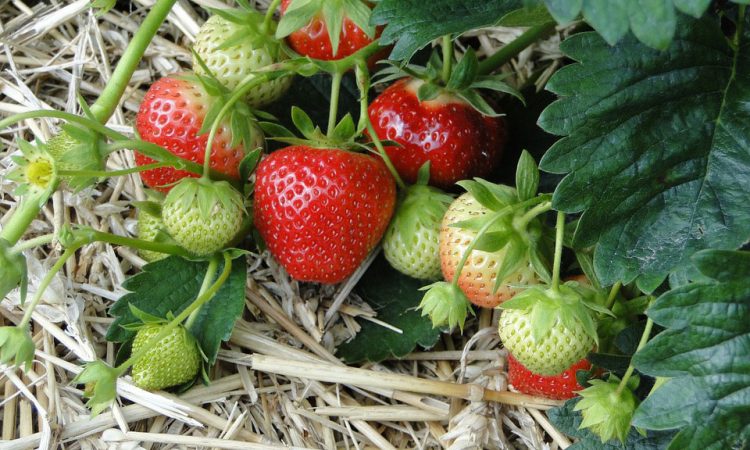 Fall planting of strawberries has its advantages to home gardeners in some areas, particularly to those who want to have a bearing bed as soon as possible in their own back yard.

We have been familiar for many years with the feasibility-in fact, even the distinct and feasibility in planting in some northerly areas. Fall planting of strawberries may be practiced fairly far north, if the transplants may gain a foothold before hard freezing weather sets in. The new planting must be mulched in time to minimize the hazards of alternate freezing and thawing of the soil crust, for this would expose the roots to dehydration and resulting winter injury.

Here in Michigan, many gardeners prefer to give their fall set plants an early start by setting them out some time between mid-September and mid October, On the other hand, mid November plantings at the Geneva (New York) Experiment Station have wintered over as well as mid-October plantings. Researchers there demonstrated some very much greater yields from fall plantings after a certain length of time-sometimes even doubled yields, compared with spring plantings of plants freshly dug in the spring.

Going southward in Mid-America, we learn that some commercial growers in southwest Missouri have found November planting of strawberries to be profitable. Plants set at, this time generally produce a better row than spring-set plants, and give an increased yield if the growing season is dry, since they get off to an earlier start in the spring. If commercial growers find a practice profitable, the home gardener may usually profit by imitating it.

The ground is prepared and the plants are set in the same manner as for spring planting. It is necessary to mulch the plants to prevent winter injury, but in Missouri only enough mulch is used to cover the plant.

Aside from the obvious advantages of fall planting-more time and better weather for the gardener-there are some other findings regarding the plant’s growth that make fall planting of strawberries seem desirable. It has been found that fall-set plants have often produced several times as many runners by the next summer as spring set plants have produced. It has also been observed that the earlier formed runners, made possible by the fall planting, are far more productive than the runners formed later.

The gardener is often advised to prevent his plants from fruiting the first spring by removing the flowers. This is to permit unchecked growth of young plants and the formation of strong runners to make a thick growth and the highest possible yields eventually. If the plants are set late in the fall, this advice should indeed be followed. If a home gardener can obtain plants to set in August or September, however, they will become established enough that he may allow them to produce a crop the very next June. This saves a whole year of waiting for strawberries.

The chief disadvantage to planting strawberries in the fall is that often plants are not available then. Many nurseries, however, have begun the practice of digging strawberry plants in the spring and storing them dormant through the summer in carefully controlled refrigerated storage, for filling orders in the fall. So this problem is not what it used to be.

Commercial growers, incidentally, prefer the dormant plants because they make better runners than plants that are transplanted before they go dormant. The latter type tends to make multiple crowns rather than runners. To the home gardener who grows his strawberries in hills instead of matted rows, this point makes little difference.

Another disadvantage to fall planting is that, to get a worthwhile crop the first spring, the gardener may need to put in more plants than would normally be used in spring planting. A third drawback is the necessity for the heavy fall mulch.

What has been said here with regard to the spring-bearing type may also be said of the everbearing strawberries. Fall planting of them is feasible as far north as Michigan, if the gardener pays attention to fall mulching-. With the everbearing strawberries it is best to plant a double or triple row with plants spaced about ten inches apart. Then keep all runners removed to produce large plants from which berries may be harvested during the summer and fall following the fall planting.

Since strawberries may remain rewardingly productive in Mid-America home gardens for several years, it is important to choose the best site possible,

Strawberries blossom early in spring, so beds on low lands are more subject to frost injury than those on more elevated sites.

Where one is willing to risk frost injury for the sake of exceptionally early yields, one should favor a site with southern exposure and a light soil. Where earliness is not so important, it is safer to choose a northern exposure that will retard flowering and lessen the danger from late frosts.

First of all, one should choose a well-drained garden spot that has been occupied by regularly cultivated crops for several years.

Previous cultivation reduces to a minimum the danger from white grubs and wireworms that can be so destructive to strawberries. It is usually agreed that strawberries are at their best in medium light soils with enough humus content to give them good water holding capacity while affording adequate drainage.

However, strawberries may also be grown with success in soils ranging from light sandy loams to heavy clay- and black prairie loams.

Although strawberries must enjoy good drainage, adequate moisture content is so important in the upper 12 inches for their shallow root systems that any soil, particularly the lighter soils, should be supplied with plenty of humus material. Rotted cow manure, compost, shredded sphagnum, granulated peat moss, sawdust and ground corncobs are some materials that may be worked thoroughly into the soil.

Where rotted manure is not available, one might use instead an inch or so of granulated peat, sawdust or ground corncobs to supplement the natural organic content.

When sawdust, corn cobs or the like are used either in the soil or as mulches it is advisable to include with each bushel about three-fourths of a pound of ammonium sulfate or about onehalf pound of ammonium nitrate or equivalent. This enables favorable decomposition to proceed without drawing unduly upon soil-borne nutrients.

Strawberries are usually rather moderate in their demand for commercial fertilizers, particularly in garden soils that have been supporting satisfactory growth of vegetables or flowers.

Where observation of previous crops or actual soil tests seem to indicate the need for more fertilizer, the bulk of it should be put on during the time when the plants are becoming established, but little or none should be applied in spring while fruit production is underway.

If manure has been worked into an already moderately fertile soil a pound or two of something like a 4-8-6, 5-10-5, 6-10-4 or a 4-12-4 fertilizer per hundred square feet of bed should help to develop sturdy, potentially productive plants; about half this much may be adequate where manure has been used.

In Michigan we like ‘Premier’ and ‘Robinson’ among June-bearing varieties that are reliable producers even under adverse conditions, although ‘Dorsett’ and ‘Fairfax’ are more attractive and far better in quality. ‘Armore’ is a highly favored new variety and ‘Red Rich’ and ‘Superfection’ are highly favored everbearing varieties.

Plants should be unpacked, and either planted or heeled-in as soon as received. Plants may be killed or seriously damaged by several hours of high temperatures.

The plant crown should be set level with the ground surface. Plants set too deep or too shallow may start growth but will lack vigor and may die.

The plant roots should extend vertically into the soil, spreading out like a fan. The soil should be packed firmly about the roots-so that when a leaf is grasped and Pulled suddenly it breaks without moving the plant.

The matted-row system is most commonly used in home gardens. Rows are spaced three to four feet apart, and plants are set 18 to 30 inches apart in the row. Allow runners to form a mat 15 to 18 inches wide, with plants four to six inches apart.

The hill system is sometimes used to obtain large berries of exceptional quality. It requires more handwork than the matted-row system. Space the rows two to three feet apart, with plants 12 to 15 inches apart in the rows. Remove the runners as they appear.

Mulch should be applied in November as soon as the temperature has fallen to approximately 20 degrees. Mulching too early or too late may damage plants. Plants mulched early may be injured by warm fall days after the mulch was applied. In cases where plants are mulched late, winter injury may occur before the mulch is applied.

Use a loose organic material such as straw, hay, or shavings, which are free of weed and grain seed. Cover the plants to a depth of two to three inches or one inch if using sawdust.

Some frost protection may be obtained by leaving the mulch over the plants as late as possible in the spring. Examine the bed every few days during warm weather. Remove only a portion of the mulch when the leaves turn a faint yellowish -green. If the mulch is loose and thin, the plants will grow up through it.