What type of Landscape Mulching to use for your garden. 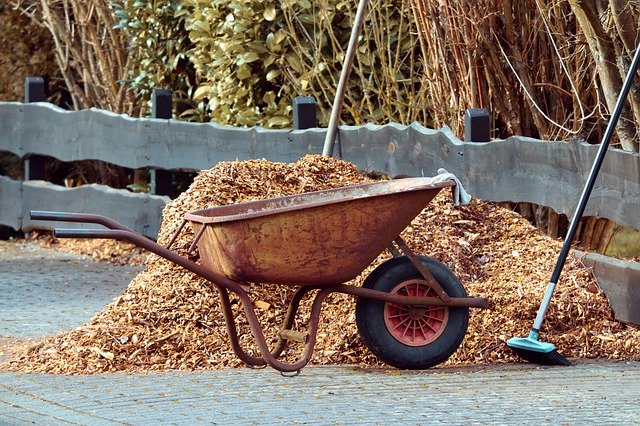 A mulch is a cover spread over the surface of the soil. Newly-planted fruit trees and shrubs were traditionally mulched with strawy manure immediately after planting. This practice continues to this day. The mulch protects the newly planted tree or shrub from frost damage in winter and from summer drought. At the same time, the rotting manure supplies the young tree with plant food.

Mulching may be practised successfully in other ways. Most mulches inhibit weed growth; all mulches conserve soil moisture. Thus, a mulched garden needs less time and work to keep it weed-free and watered. During both winter and summer, mulched soils are protected from extremes of temperature. Many plants, notably cucumber, vegetable marrow and tomato, will send adventurous, new feeding roots into the manure or compost. Granulated sedge peat, itself a soil improver, is a neat mulch in the flower garden. A 3cm (1in) thick layer is sufficient for the season. Peat may also be used in the vegetable garden and is recommended for the strawberry bed.

Straw is also a suitable mulch for fruit and vegetable gardens but it is no, of use around seedlings which it may smother. The rotting straw from sum mer mulches may be dug into the soi during winter digging. Autumn leave: make an excellent mulch to prevent the growth of annual weeds on temporary paths in the garden. Wood shavings and sawdust serve the same purpose. Them materials rot down well and disintegrat( within three years of their application Although the use of leaves, wood shavings and sawdust is not generally recommended for mulching growing plants, autumn leaves may replace straw around established fruit trees and shrubs. Lawn mowings may be used for mulching in all parts of the garden but if these are obtained from an outside source, you should make sure that no weed-killer or hormone spray has been used on the lawns from which they come. These substances are so persistent that broad-leaved plants mulched with lawn clippings containing minute trace, of them, may be seriously damaged of even killed.

A mulch of small stones can be ar attractive and useful feature in the flower garden. In the rock garden it is a common practice to mulch the soil surface with pea gravel or stone chippings. This not only helps to retain soil moisture and to keep down weeds, but also does much to prevent alpine plants from rotting off at the collar, the most vulnerable part of the plant. Many plants seed themselves freely in this stone mulch, thus providing a ready means of increasing stock.

Black polythene sheeting does not rot down to add plant foods to the soil and it is not attractive. Its use should be restricted to the fruit and vegetable garden where it has many advantages. Rows of grapevines may be grown in permanent plastic mulches and the soil beneath fruit trees remains weed-free, where square or circular pieces of polythene are laid around each tree. With vegetables, black plastic mulches are temporary and unless cut (as is the practice where potatoes are grown under such mulches), the sheeting should be taken under cover in the autumn and used for several seasons. It is essential that the sheeting be anchored securely to the soil. One way of doing this is to lay house bricks along the edges of the sheets. Pushing the sheeting into slits in the soil is better and very necessary in windy areas. The slits should be made with the spade and, after the sheeting has been unrolled and tucked into them, the soil alongside the slits should be firmed.

Where cabbages, Brussels sprouts, cauliflower, broccoli, sweet corn, tobacco and tomatoes are to be grown in black plastic mulch, the sheets should be set in position before planting. A narrow gap is left between the sheets and the plants are then set out in the gaps. Potato tubers are planted in shallow holes made with the trowel and the sheeting is then drawn over the rows and fixed in position. Small cuts are made in the plastic so that the young shoots of the potato plants may grow through.

All weeds should be removed before a soil is mulched. During the spring and summer the ground must be quite wet before a mulch is laid down. If mulching is done in a drought the soil must be thoroughly soaked with a hose or sprinkler before it is mulched. Except when trees and shrubs are planted in autumn, soil temperatures must be reasonably highwhen the soil is mulched. Mulching, therefore generally starts in June—the exception being when polythene sheeting is used for potato planting in April.