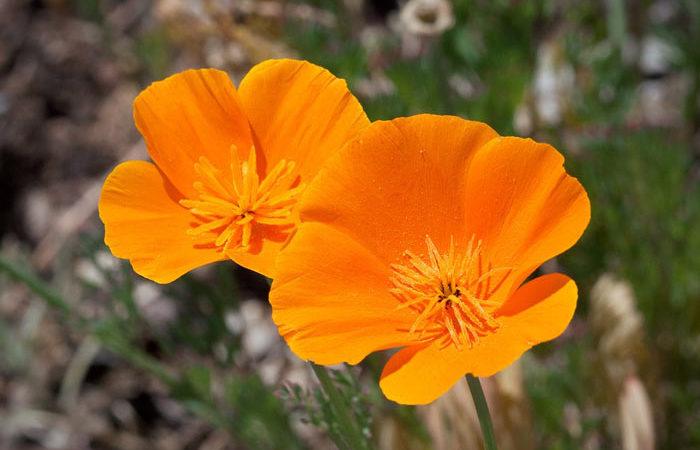 (Named for Dr. Eschscholtz as the result of an expedition to explore the botany of what is now California in 1815. Named by Chamisso, a companion naturalist)

The silky, golden-yellow blossoms of this, the state flower of California, are borne in profusion. Gardeners have greatly improved the plant until now we have both singles and doubles in a great range of colors-creamy-white, carmine, deep pink, orange, lemon and coral pink. Some forms have delicately fluted petals. The California poppy spreads over the ground but also grows about a foot tall. The leaves are grayish-green, and add much to the simple beauty of these flowers, which appear profusely from June until frost.

Where to Plant. These flowers can well be planted in masses in beds or in a border; as the various colors harmonize nicely, the varieties may be mixed. If the buds are cut before they are quite open, the flowers may be used in the home to advantage. In the garden the golden and lemon varieties combine nicely with such blue materials as the Cornflower and the Larkspur.

In the National Geographic Magazine we read:

No state has chosen its representative flower more appropriately than California. The golden poppy, the very essence of California’s sunshine, has woven its brightness into the history of the Pacific coast. During the Spring months, when it covers valley, field, and mountainside with a cloth of gold, men, women, and children make a festival of Poppy gathering like the Japanese at cherry-blossom time.

Tradition alleges that a tilted mesa north of Pasadena when aglow with Poppies in the Spring used to serve as a beacon to coasting ships more than twenty-five miles away, a tale which is not wisely questioned by one who has never seen the glory of a golden Poppy field. Certain it is that early Spanish explorers saw some of the hillsides covered with these flowers and named the coast “The Land of Fire.” It was “sacred to San Pascual,” they said, “since his altar-cloth is spread upon all its hills.”

GENERAL. Sow the seed in the Fall, or as early in the Spring as the soil can be worked. Thin the plants to stand eight inches apart. Do not attempt so transplant, as the California poppy does not move readily. The old plants will self-sow if protected in the Fall.

California-poppies tolerate some shade and grow in quite dry and otherwise adverse places.