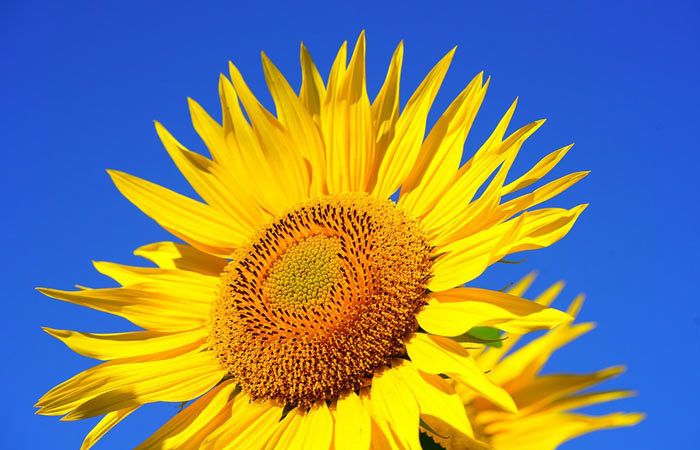 The Sunflower is bold, he is tall, has a lot of bluster and bravado about him, but he is not coarse; no, he does not intrude upon us. We like to have him look over our fences; we like to watch him looking down toward his feet to see how tall he has grown. If any flower deserves the name of a “Sunburst” it surely is the Sunflower. It is the state flower of Kansas.

When the Spaniards first visited Peru they found the Sunflower as much the national flower of the Incas as it today is the state flower of Kansas. The Incas gave it a deeper reverence because of its resemblance to the radiant sun. In their temples, the priestesses wore Sunflowers on their bosoms, carried them in lieu of tapers, and otherwise used them in their services. The Spanish invaders found many images of Sunflowers wrought with exquisite workmanship in pure virgin gold. These wonderful images, among many others, helped to excite the cupidity of the conquistadors and thus to bring about the downfall of the Incas.

The Incas of Peru and the Hurons of our own country alike were enjoying it as a cultivated crop when the white man first visited them. They used it much as the bamboo growers use the bamboo-as a Jack of all Services. Its seeds they found useful alike as food and as the raw material of a home-made hair oil; its petals were utilized in the manufacture of a yellow dye; its leaves served them as fodder and from its stalk they secured their thread.

In China its fiber is used as an adulterant of silk; in southern Russia, the seeds are widely employed both in making oil and as a substitute for our peanut. The pocketful of Sunflower seed plays the same role in some parts of Russia as the bag of peanuts here. Much of the Sunflower oil produced in Russia is used in making soaps and candles. Europe, Asia, and Africa all cultivate this plant.

The following pretty legend indicates that the Sunflower which originated in Peru, the home of the ancient sun-worshipping Incas, is not so humble in origin as some may imagine but may justly lay claim to royal lineage:

Oh, royal Sunflower, I think I know why You always gaze up at the azure blue sky; Your bright, golden crown ever turned to the sun know how your life here on earth was begun. When the Sun, King of Day, first retired for the night Behind the horizon to rest till daylight, He hung his gold crown on a horn of the moon. But the stars danced so high they shook it off soon, And it fell to the earth to be gemmed by the dew. Oh golden Sunflower that lost crown is you. Gussie Morrow Gage.

KINDS. There are two sorts of annual Sunflowers. The seven or eight foot fellow is Helianthus annuus, of which there are many interesting forms; some are attractively doubled, like Chrysanthemums, or Asters, some are dwarf, some are ball like, and look like golden Dahlias, while still others have been developed that are rich chestnut red either throughout or only in the center, wherein their hues resemble the colors found in the Blanket flower.

The second interesting species is known by many names, such as Miniature, Cut and come again, Dwarf Branching, and Cucumber leaved, but really is H. debilis (H. cucumerifolius). It grows three or four feet tall and is bushy. The flowers, unlike those of the first species, are usually only 3 inches in diameter, and the yellow petals are often twisted

Where to Plant. The uses for the tall, large sorts readily suggest themselves; there is always space for a few of them in a garden. They make attractive hedges in the distance. They screen poultry yards and as the seeds drop, they are greedily eaten by the chickens. Sunflowers are grown in the cold northwest where corn is not a success. It is used for silage. Sunflowers in the garden become quite shabby in appearance after the middle of August. The Cut-and-come-again sorts are suitable for cutting and are showy in the border.

GENERAL. The seed should be sown in the open ground when the trees are coming into leaf. A rich soil suits both sorts best. The tall forms should stand two feet apart, and the shorter ones a little closer. The Cut-and-come-again sorts commence to bloom in June and continue all Summer.