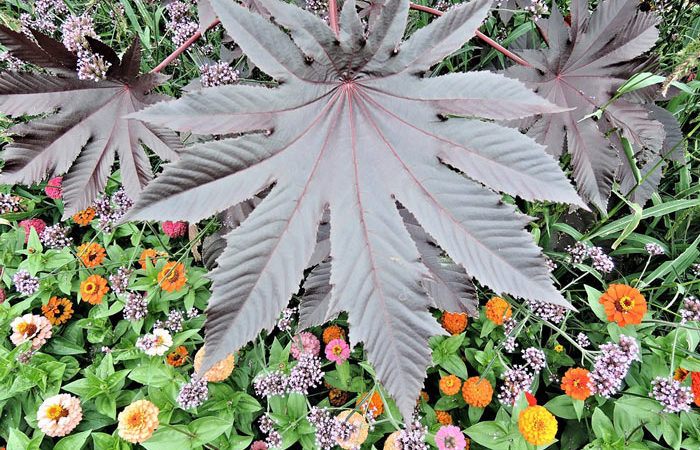 Were these words meant for boys and girls only we fear they would never be read, because of ‘, the unpleasant memories associated with this plant. In the garden, however, Castor-bean, Ricinus communis, plants are interesting because of their tall growth and ample leaves which are in the different varieties, purplish-red and maroon. The flowers and spiny fruits are not very showy. The plants range in height from 3 feet to 12 feet.

USE. The Castor-bean is rather tropical in appearance and is useful for the center of large beds, for the background of borders and in dense masses to screen unsightly buildings and fences.

Castor oil is obtained from the large seed, which also contain an active poison. Children should be cautioned against biting into them.

GENERAL. When starting them indoors the best method is to place several seeds in a small pot. When the seedlings have attained sufficient size, all but one should be pulled out. The seeds may also be sown in the open ground, in which case they must be thinned to stand several feet apart. To make them grow tall give them an abundance of water and a mulch of manure.