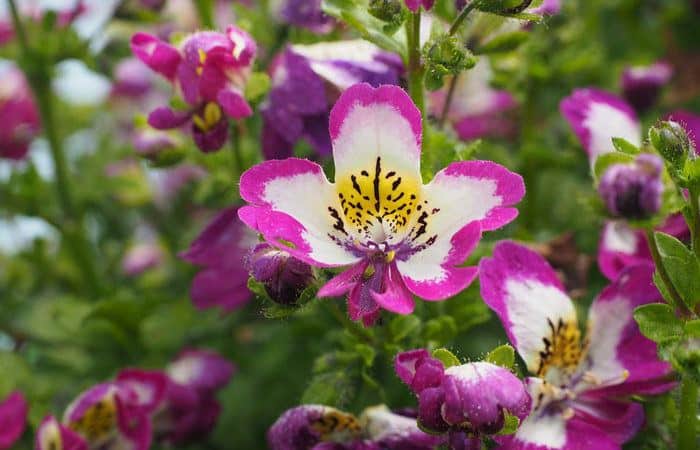 (From the Greek cut flower, referring to the fact thatthe petals are cut and lobed)

The flowers of the Schizanthus pinnatus are white, pink, crimson, yellow, purple, lavender and rose, and are delicately spotted and blotched like the smaller butterflies. The blooms on a well-grown plant are produced in such profusion as to completely cover it. For the garden the dwarfed varieties should be chosen as the tall sorts grow rather slender and crooked. The leaves are attractive, being deeply cut and fern like.

There are really four species found in catalogs: S. retusus, S. pinnatus, S. grahami and S. wiselonensis (a hybrid between the last two species). They resemble each other rather closely. Much depends upon the strain purchased. The Dawkins and the Garaway hybrids are considered to be the largest flowered sorts.

USE. The Schizanthus is attractive displayed in small vases in which the flowers appear like small orchids. In the garden, unless the low-growing sorts are used, the plants will require staking, because the stems are weak and become crooked when not trained.

GENERAL. Sow the seeds out of doors in late Spring when the soil is warm. The plants do not transplant as readily as some annuals, and it is therefore wisest to move each seedling with a ball of earth. Let the plants stand a foot or 18 inches apart and give them a little shade. The young plants are the better for the support of a stake early in their growth; it need not be strong nor over 2 feet tall.

The plants bloom in two months from seed. Pinching them early in their growth will make them more bushy and less straggling, a tendency to the latter form being their fault. Spraying with water daily in Summer will keep them healthy.