A Taste of Asia Gardening 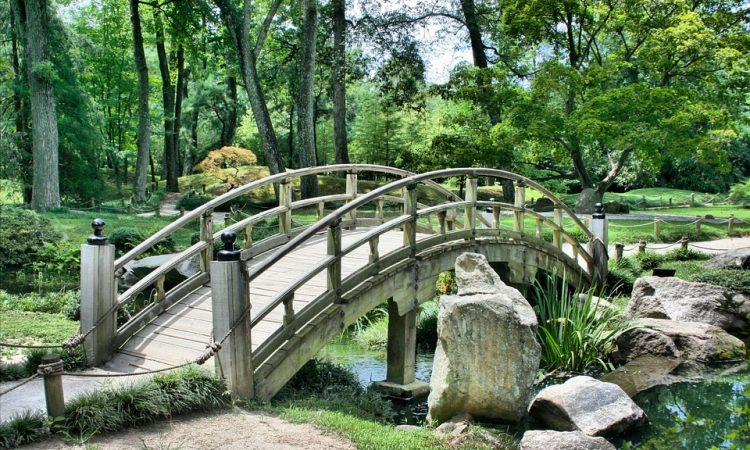 Lately, I have noticed that the mail order garden supply catalogs are full of Asian-themed garden accessories such as pots, traditional bamboo fences, and stone lanterns. This seems to go along with the trend toward Asian-inspired minimalism in home décor. In California and the Pacific Northwest, traditional Asian and Asian-inspired gardens have been popular for years. Can a national vogue for Chinese and Japanese gardens be far behind?

Probably not, and that’s a good thing. At a time when the urge to indulge in conspicuous consumption leads some people to jam suburban lots full of waterfalls, follies, gazebos and monstrous outdoor cooking appliances, a little minimalism can’t hurt. The traditions of Asian gardening, which are inextricably linked to various religious, cultural and aesthetic philosophies, go back thousands of years. Asia is also a horticultural treasure trove. Western plant hunters have been bringing back specimens from all over the continent ever since Europeans first went East in search of the rare and costly. The nineteenth century was a particularly fertile time for these plant hunters, and they obtained many of the species that we take for granted today.

The Asian garden of today is more about philosophy and contemplation than ostentation, but it wasn’t always that way. Conspicuous consumption is neither new nor native to America. It was already going strong during the reign of the Chinese Emperor Yangdi in the 7th century AD. Yangdi’s garden, according to historical accounts, had trees that were covered with silk flowers during the winter, mechanical figures that sailed in boats along specially constructed canals, and a mix of real and artificial lotus blossoms floating in the water.

Fortunately, things have gotten simpler since then. When people think of Asian gardens, they may envision a Chinese walled garden with its carefully edited collection of specimen plants; or a Japanese karesansui or dry garden made up of carefully placed elements such as stone, sand and moss. Another type of Japanese garden comprises a microcosm of natural features—hills, rivers, and valleys—brought down to garden size. Those who have been to Japanese-style gardens such as the one at Sonnenberg Gardens in Canandaigua, New York, think of a restful green garden with a tea house as a central feature. This kind of landscape, which came about during the late 16th century, incorporates stepping stones, mosses and ferns, stone basins and lanterns to guide guests to the teahouse for the tea ceremony.

You can certainly incorporate Asian traditions in your home garden, even if you don’t have the space to erect a teahouse, the energy to construct a miniature landscape, or the time to rake sand in pleasing patterns. In the Chinese tradition, enclosure is important. If you are choosing new fencing, consider one made of bamboo. With or without an enclosure, you can select a corner and plant Black Pine (Pinus thunbergiana), or one of the many beautiful species of Japanese maple (Acer palmatum), such as the coral bark maple (‘Sango Kaku’), which also provides beauty in winter with its red branches. A weeping cherry (Prunus serrulata) or a flowering plum tree (Prunus blireiana) would be an equally good choice. Place a simple stone or wooden bench in front of the tree, and position a large pot filled with ferns or ornamental bamboo to one side. (Because of its invasive habits, bamboo is usually more successful in home gardens when it is containerized.) If bamboo doesn’t sing to you, fill the container with one of the Asian grasses, like Chinese Zebra Grass (Miscanthus sinensis zebrinus), with its tall, distinctively marked blades that whisper in the breeze. Encourage moss to grow under your tree, by transplanting clumps from another mossy area.

Water features are in vogue now, and Asian gardens, like the Moon Viewing Garden at the Strybing Arboretum in San Francisco, often have reflecting pools. If you have a backyard fishpond or pool, surround it with stone, ferns and Japanese iris. Use rhododendrons and azaleas as a backdrop. On moonlit evenings study the reflections on the water’s surface.

If the idea of an Asian garden intrigues you, try to see as many of them as possible. The Chinese Scholar’s Garden on Statan Island is an excellent place to start, but there are many others all over the country. A recent book, The Art of Japanese Gardens by Herb Gustafson (Sterling 2000) can help you to choose the right elements for your home landscape. If you favor Chinese styles, try The Chinese Garden by Joseph Cho Wang (Oxford, 1998).

The world gets smaller and busier every day. Relieve the stress and broaden your cultural horizons by bringing a far off corner of it to your own backyard.