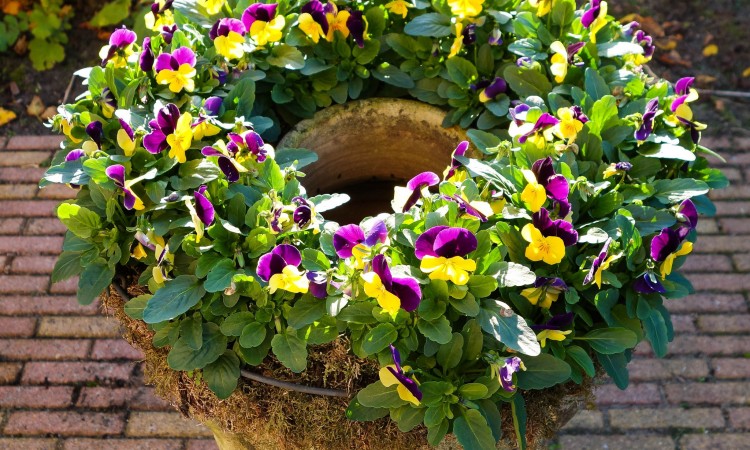 Although insect pests and plant diseases are generally easy to control in the flower garden, animal pests are not. For one, much of our wildlife is protected by law and can’t be indiscriminately eliminated. You may have variable success with repellents, depending on your location or timing. If the animals are not very hungry or population pressures are not too great, repellents may be enough to discourage invaders. But then again, there’s no guarantee that they’ll work.

Animals are intelligent and will learn from experience. If stopped by an electric deer fence or a bulb cage (chicken wire around tulips and other tasty bulbs), they may remember this experience and not try again. Or they may find a new way to get to your flowers or decide to feast on an entirely different variety.

Live traps with release a distance away is another option. However, this may not be the best alternative. For example, you may catch domestic cats. And who wants to deal with an angry skunk? Your community also may have regulations against relocating wild animals. Be sure to know the law before you act.

If trapping large live animals, use caution to prevent being bitten as many carry communicable diseases such as rabies. In Vermont fox and raccoon rabies are both on the rise.

Snap or leg hold traps are banned in most areas, though even if permitted, it is not a good choice as it is a cruel and inhumane way for any animal to die. There’s also a good chance that you could catch a pet or worse, injure a child. Shooting is usually not permitted, and especially not in populated areas.

Poison bait is commonly used for mice and voles. However, before you set a trap, be aware that cats and other animals may be attracted to the trap to feed on the poisoned rodent or the bait, so be sure to place it where they can’t get.

Here are some common animal pests found in the Northeast and some recommendations for control. None of these are fool proof, but all are worth a try to control pesky animals.

MICE AND VOLES: Although these rodents look similar and cause similar damage, they are only distantly related. Both live in grassy areas and leaf mulch and travel in tunnels. They feed on any vegetation, including bulbs and tubers, as well as bark on young trees and shrubs.

Exclude them with barriers or trap at main runways with peanut butter bait or vitamin D (death results from calcium imbalance). Other repellents, such as castor oil, may help as will poison baits. Or get a cat or small dog to help get rid of mice and voles.

MOLES: Moles live in tunnels that while helping to aerate soil, also provide passageways for other animals and may cause excessive soil disturbance and plant upheaval. Although moles help by eating insects like grubs, they also hurt by eating earthworms. Control them by eliminating the insects they feed on or trap as you would voles.

CHIPMUNKS: This rodent lives in tunnels or burrows and is adept at running up trees and shrubs as well as along the ground. Chipmunks feed on seeds, nuts, fruits, roots, and bulbs, and, despite their tiny size, can uproot new plantings.

Trap them using peanut butter, oats, nut meats, or sunflower seeds. Or spray repellents on bulbs, or place jagged shells or stones in the holes when you plant bulbs. Plant cages will keep them out. Or get a cat or two.

TREE SQUIRRELS: Squirrels are an occasional problem as they like to nest in trees and will feed on fruit, nuts, insects, bark, and seeds. Protect new plantings with cages. Squirrels can be trapped and released using sunflower seeds, peanut butter, and raisins as bait.

RABBITS: Rabbits are a serious problem not just in the Northeast, but throughout the entire country. They live in grassy areas and thickets, feeding on vegetables, flowers, and tree bark. They are active during the day year round in most areas. Your best bet is to fence them out with chicken wire or hardware cloth cages placed higher than snow level. Inflatable snakes or repellents, such as those used for deer, also may help.

GROUNDHOGS (WOODCHUCKS): These rodents cause only occasional problems in the northern states. They live in burrows with two or more openings with mounds at entrance. You can find them feeding in early morning and late afternoon on tender vegetables and flowers, especially pencil-thick stems like phlox, and occasionally on bark.

Your best bet is to trap them live or fence them out with a three-foot high fence. Bury several inches in the ground to prevent them from tunneling under. You also can repel them with taste sprays applied to desirable flowers or by placing oily substances at hole entrances. If all else fails, you could insert poison gas cartridges in their holes and cover to kill.

SKUNKS: Skunks live in rural, wooded areas where they feed on insects, small rodents, fruits, berries, and other vegetables. They are actually more of a nuisance because of their smell than from eating flowers although they also carry rabies. Fence them out as you would groundhogs. If trapping live, bait with sardines or cat food. Be sure to wear protective clothing and eye goggles when handling skunks.

RACCOONS: Like skunks, raccoons generally are not a problem in flower gardens although if you have corn, be on the lookout for these masked marauders. They live in wooded rural or lightly populated areas in natural shelters such as hollow logs or near water. They feed on insects, small animals, grains (especially corn), seeds, vegetables, and other plant materials. Keep them out with a wire fence (about four feet high with another foot buried in the ground) or electric fencing, or trap as you would skunks.

DEER: Deer are a serious problem throughout the country, even in populated areas. With few natural predators and strict control laws, they can be difficult to control. Deer prefer wooded areas and tall grass and thickets. They eat most plants and the bark of woody plants.

Many controls are available, including various taste and smell repellents (deer have a keen sense of smell); light or noise emitters (must be moved often as deer are smart and learn quickly); or an electric fence baited with peanut butter (one taste won’t kill, but will deter deer).

The best solution is probably exclusion with three-wire triangular or slanted fences, or high (eight- to ten-foot) deer fences of woven wire mesh or heavy fishing line strung at two-foot intervals up the posts. If using the latter, the lines must be flagged, as deer can’t see well and will try jumping through.

DOGS: Dogs can devastate gardens by running and romping. They also dig up soil and plantings and leave droppings. Keep them out with fences or repel with plant sprays designed specifically to deter dogs. Tie up your own dog or use invisible fencing to keep it from getting into areas you want to protect. Talk to other dog owners and ask them to keep their pets out of your yard.

CATS: While cats usually are good at keeping small rodent populations in check, they can be a problem if they dig up new plantings. Use repellents or lay chicken wire on or over new and young beds.

Effective control of animal pests is possible though your success will depend on your timing, method, and perseverance. Remember, a control that worked for your neighbor, or for you last year, may not work in your flower gardens this time around. You may need to try a variety of methods and devices, and if first you don’t succeed, try, try again.