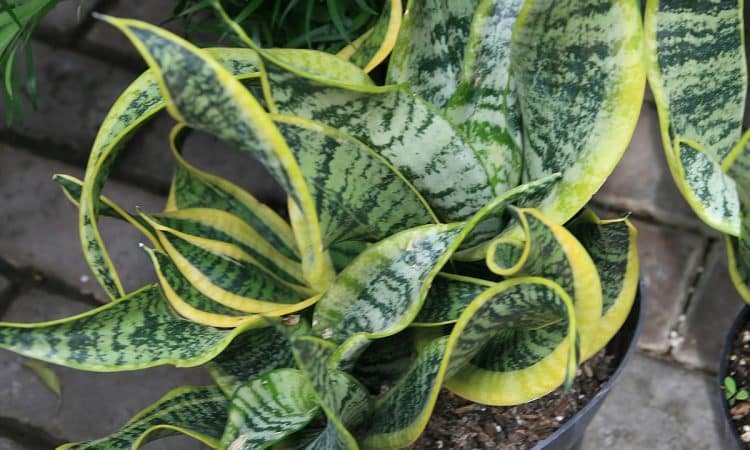 Bowstring hemp is also known by other common names such as the scary “viper’s bowstring hemp” or “snake plant”, the unflattering “mother-in-laws-tongue”, or just its genus name of sansevieria (said as “san-se-Veer-ee-ah) which I prefer.  They seldom flower indoors, being grown instead for their modernistic and upright leaves, low care, and tolerance to low light.

Sansevierias prefer warm temperatures, and should be kept above 50 degrees (F).  For this reason, you only see them growing outside in landscapes in southern California and the southern tip of Florida. In tropical climates, such as in Florida and the South Pacific where they aren’t native, this plant can spread aggressively by its roots and become invasive.

While they can grow outdoors in full sun, indoors they prefer bright and indirect light.  Yet they will adapt to very low light, such as bathrooms with no windows.  In low light the leaves may have less or no coloring.  If they’re in low light, don’t move them directly to high or bright light, or leaves may sunburn.

They have thick leaves in order to store water, so plants don’t like to have wet soil and can tolerate drying out.  So, if transplanting, use a well-drained potting soil, and let it dry to the touch between waterings.  If in doubt, don’t water.  Clay pots are good for them, as they tend to keep the soil dryer than plastic pots.  And, they don’t tip over as readily.  Just make sure pots have holes in the bottom for drainage, and that plants don’t sit in saucers with water.  Plants usually only need watering once every week or two.

If leaves fall over, and are rotten at the base, plants are staying too wet.  Let the soil dry out or, preferably, repot into fresh and well-drained soil.  Plants can remain pot-bound, with roots gradually spreading to the point that they can expand, and even break, plastic pots.  If a plant is too pot-bound, merely divide off pieces of the roots (rhizomes) with shoots.

In addition to its thick and succulent leaves, with hardened leaf surfaces, sansevieria has other features that help it survive droughts.  The microscopic pores (stomates) on leaf surfaces, which as in other plants are used to exchange gases with the air, are only open at night.  Most plants exchange gases during the day.  This prevents leaves from losing water to evaporation during the day.  It also means that stored oxygen in leaves is released when stomates open at the beginning of night, and it removes carbon dioxide from the air at night rather than during the day, as with most plants.

One species (cylindrica), native to Angola, has leaves that are rounded in cross-section and so may be known as cylindrical or African spear plant. This rounded shape, in contrast to the flattened or slightly concave (in cross section) leaves of its relatives, reduces the leaf surface area susceptible to drying out.  Leaves are one to two feet long, and generally dark green with lighter green crossbands. It was first described in 1837, but only more recently has it been sold as a houseplant in this country. If you’re lucky, you may even find a variegated form.

While sansevieria plants tolerate little or no fertilizer, they will grow better if fertilized with an all-purpose fertilizer when they are actively growing.  You can use houseplant fertilizers at half the recommended label rate, as plants don’t need much.  Too much fertilizer makes leaves fall over.

Since leaves are rather thick, leathery and tough, they usually are not chewed by pets.  If cats or dogs chew them, though, the saponins in leaves may cause mild gastrointestinal upset.

The plant seldom attracts pests, the only one you may see being the white mealybugs.  These can be removed with cotton swabs and rubbing alcohol.  As noted with watering, if plants stay too wet, they may rot.  Otherwise, if leaves get dusty merely wipe them with a damp cloth.

The common names come from the shape of the leaves—generally, in most selections very long and strap-like, tongue- or sword-shaped (generally one to two feet long, arising in groups from the plant base)—or the fact that plant fibers have been used to make bowstrings.  In a NASA study in the 1980’s, this plant was found to remove several pollutants commonly found in air indoors—benzene, formaldehyde, trichloroethylene, xylene and toluene.  These come from such sources as fabrics, manufactured furniture, carpets, paints, and cleaning supplies.

Sansevieria was named for the Prince of San Severo of Naples, Italy, born in 1710.  It has been cultivated for over 250 years, but came into production as a foliage plant in this country in Florida in the 1920’s.  It had existed in Florida for some time, likely introduced between 1765 and 1820 during Spanish colonization.

This plant is in the Asparagus family, the same of course that contains our vegetable asparagus, but also other seemingly diverse plants as the perennial lily-of-the-valley, the houseplant dracaena or pony tail palm, the wildflower Solomon’s seal, and many others.  You may still find it listed in the butcher’s broom family or Ruscaceae (now renamed as a subfamily of the Asparagus larger family).  Or, you may find it listed in the former Agave family.

There are about 70 species, some with hard and some with soft leaves.  Most indoor plants are of one species with hardened leaves (Sansevieria trifasciata), native to tropical West Africa.  This species has gray-green leaves with darker green crossbands. The popular variegated selection ‘Laurentii’ of it has mottled gray-green leaves edged in golden yellow.  Less common is ‘Silver Queen’ – similar to the species in shape only with leaves that are silvery gray-green with thin dark green margins.  ‘Moonshine’ is similar, only with broad leaves.  The less common, yet choice, ‘Bantel’s Sensation’ has narrower leaves with distinctive vertical white striping.

The Hahn’s or bird’s nest sansevieria (hahnii) was a sport of Laurentii, selected for its squat rosette shape by Crescent Nursery Company of New Orleans. It was patented by Sylvan Hahn of Pittsburg in 1941, as was the golden Hahn or golden bird’s nest selection in 1953.  These generally have eight to ten leaves, up to three inches wide and 6 inches long.  Leaves are dark green with gray-green crossbands on the former, while the variegated golden form has buttery yellow leaves with green vertical stripes.  Being so low, they are good for small spaces, desktops, and windowsills.

If you’re an indoor plant collector, there are many other selections of sansevieria that you can find in full service garden stores and from specialty mail-order greenhouses.  If you’re just looking for an easy, almost foolproof houseplant that thrives on neglect and tolerates adverse conditions, one for low light, or one that will help clean the air of pollutants, then look for sansevieria at most houseplant retailers.