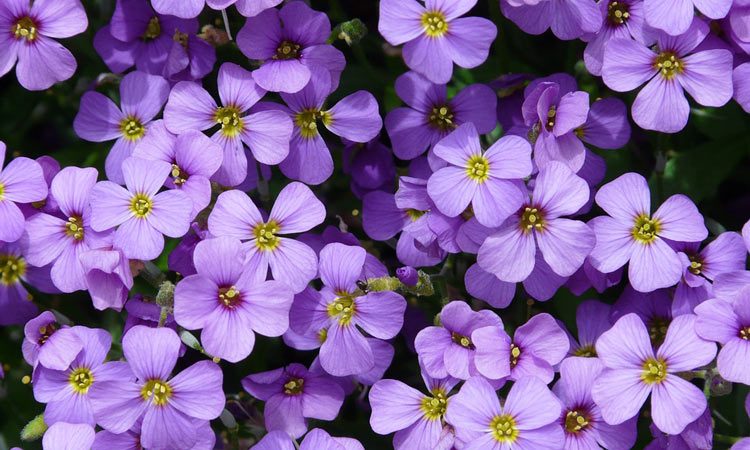 (Aubrie’ta). Hardy, perennial, more or less evergreen, low-growing plants which bear a profusion of bloom in early spring. They are invaluable in the rock garden and wall garden, and as edging to flower borders, and groundwork for taller plants in spring flower beds. Unfortunately, they are apt to be rather short-lived where hot summers prevail. Young plants seem better able to withstand adverse conditions than are older ones; hence it is a good plan to raise some new plants each year. They may, in fact, be successfully treated as biennials. They are widely distributed in mountainous regions along the coast of southern Europe and Persia and belong to the Mustard family, Cruciferae. Aubrieta (previously spelled Aubrietia) is named after Claude Aubriet, a French painter of natural history subjects.

When to Plant—Suitable Soil. The Aubrietas like rather light, well-drained soil; heavy soil must be made suitable by adding leaf mold and sand; otherwise the plants are liable to die off or become patchy in winter.

They need a sunny or only slightly shaded position and may be planted in fall or spring.

Ideal Wall Plants. Where summers are not excessively hot, Aubrietas are ideal plants for draping a garden wall; if planted on top of the wall or in crevices between the stones in well-drained, sandy, loamy soil, they spread and furnish a delightful show of bloom in spring.

When to Sow Seeds. Aubrietas can be increased in several ways. Seedlings are raised by sowing seeds in boxes (flats) of sandy, loamy soil, placed in a cold frame or slightly heated greenhouse in March—April. The seedlings are transplanted 2 in. apart in other boxes of similar soil and when well rooted are planted in nursery beds or in cold frames until large enough for their final positions. After blooming, old plants may be lifted and separated into rooted pieces for replanting.

How to Take Cuttings. Cuttings should be inserted as soon after flowering as possible in boxes of sandy soil placed in a frame kept closed. If a stock of old plants exists, the flowering shoots should be cut off when the blooms have faded and a mixture of leaf mold and sand worked in among the shoots: the latter will then form roots freely and, if removed and transplanted in autumn, will bloom the following spring.

In Europe many beautiful named varieties of the Italian A. deltoidea are grown, but in America it is more usual to raise plants from seeds. Seedlings vary considerably; good forms may be selected for vegetative propagation.