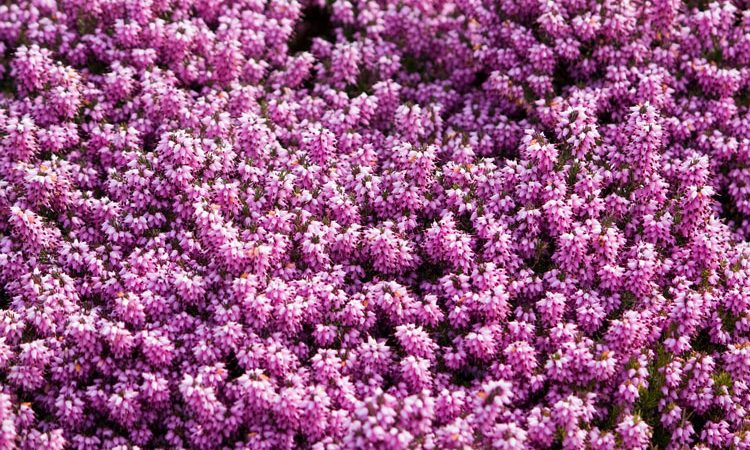 Small, hardy, evergreen shrubs which grow wild in many parts of Europe and in a few localities in North America. They belong to the Heath family, Ericaceae. The name is derived from kallunein, to sweep. Branches are used as brooms. Only one species . is known, C. vulgaris, the common Heather or Scotch Heather, but it has many varieties which differ widely in stature, the color of flowers and color of leaves. It is a typical moorland plant and grows in profusion in Europe, often covering hundreds of acres, where there is little or no lime in the soil. The plants grown by florists as pot plants and sold as heathers are more accurately heaths. They belong to the botanical genus Erica.

For Peaty and Sandy Soil. Where they thrive, Callunas are excellent plants for peaty and sandy soil; but they must not be planted where there is lime in the soil. They are hardy at New York City, but not generally so in more severe climates. Although they can be used in formal beds, Callunas are seen at their best in more natural plantings where they can grow into irregular masses. They are unsuited for wet, ill-drained land. Before planting, the ground is simply dug over and small plants are put in about 12-18 in. apart in early fall or spring. They give little or no trouble in soil of the kind described provided they are in a sunny location. Each spring before new growth begins the shoots of the previous season should be sheared off close to their bases. Winter protection in the form of branches of evergreens laid over them is helpful in severe climates.

When to Take Cuttings. Cuttings of young shoots an inch or so long are dabbled in a firm bed of sandy peat and are covered with a cold frame or bell jar out of doors in July and August, or they may be inserted in sand and peat moss in a greenhouse in fall.

Branches attached to growing plants are sometimes weighed down with stones and covered with sandy soil out of doors in spring and removed as rooted plants two years later. The common heather can be raised from seed sown in spring in flats of sandy peat or in a bed of sandy peat in a cold frame or out of doors; the seeds need not be covered with soil, but must be kept shaded until germination has taken place. Choice, selected varieties do not reproduce themselves true from seeds.