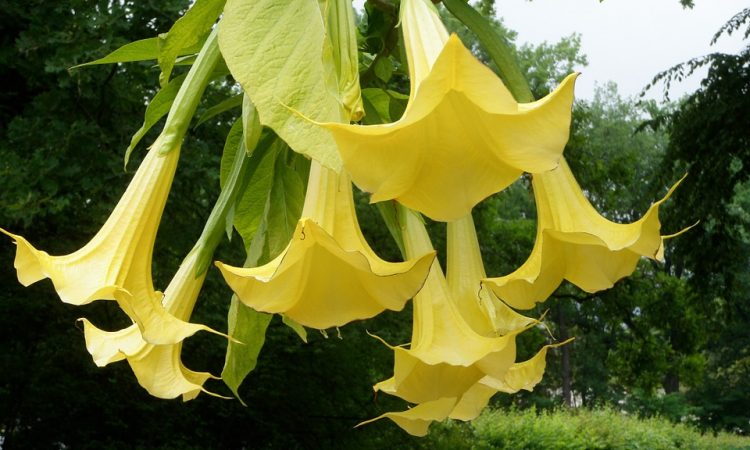 Annual and tender shrubby perennial flowering plants. They are natives of tropical America, Mexico and Europe, and belong to the Nightshade family, Solanaceae. Datura is the old Arabic name. The most familiar kind is Datura (Brugmansia) arborea, which bears large, white fragrant blooms in summer and is a favorite plant for tubs.

Tender Perennials. The shrubby kinds are cultivated in a greenhouse with a minimum winter temperature of 45 degrees and out of doors where little or no frost occurs. When wintered indoors in pots or tubs they may be placed out of doors during the summer. They grow up to 10 ft. in height, have woody stems, large ovate leaves, and produce pink, yellow, red or white trumpet-shaped flowers in summer. The plants are either grown in large pots or tubs, or planted in a prepared bed in the greenhouse. The shoots are trained to wires attached to the wall. In the young stages the plants are repotted frequently until large enough for tubs. Established plants are watered once a week with liquid fertilizer during the summer. Shade is not required except for newly potted plants. Pruning consists of shortening the side shoots by two thirds after flowering. Very little water is required during the winter, sufficient only being given to prevent the stems from shriveling.

Propagation is by inserting cuttings of young shoots in a greenhouse in spring.

The annual kinds are suitable for the mixed flower border during summer. They grow about 3 ft. in height; have large ovate leaves and trumpet-shaped flowers in white, red or pink. The seeds are sown in light soil in a warm greenhouse in March. The young plants are transplanted singly into small pots and are planted out of doors in rich soil and in full sun as soon as it is safe to plant tomatoes outdoors. In the South the seeds may be sown directly out of doors.

Economic Uses. One kind of Datura, D. Stramonium, the Jimson Weed or Thorn Apple, furnishes an important drug with narcotic, anodyne and antispasmodic properties, commonly known as Stramonium. It is a coarse-growing annual plant found naturalized as a weed in most parts of the United States. Its juice is poisonous and eating wilted plants is likely to prove fatal. Growing in two or three months to a height of