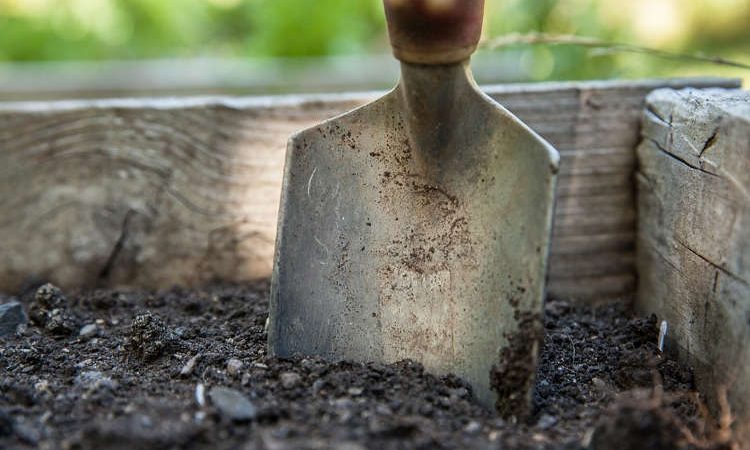 The various operations carried out on the soil by the use of a space are all known as digging. The general purpose is to break up the soil to improve its physical nature, rendering it more suitable for supporting plant life.

Digging is generally carried out in the autumn and winter, when a solidly compact soil can be broken up and left rough throughout the winter. The more surface that can be exposed to the weather the better, and the action of frosts, drying winds and rain break up the surface into small crumbs or tilth, generally increase aeration, and render the soil more open in texture. Rain and snow drain from the surface more quickly, leaving the surface dry and, therefore, the soil absorbs warmth from the spring sunshine more easily. Drain‑ age is improved and the air that exists between the soil particles supports the beneficial bacteria.

The term digging means turning over the top soil one spit deep or the depth of the spade’s blade, ie 25cm (10in). Surface weeds are buried, the level of the land remains the same and the clods of earth are left unbroken.

It is important that the spade is thrust into the soil to its full depth and in a vertical position. If this is not done, the land is dug quicker but cultivation is not deep enough or thorough enough and the weeds will not be properly buried.

Single digging To dig over a plot of land, a trench a spade’s width and a spade’s depth is dug out across one end and the soil removed and taken in a wheelbarrow to the other end of the plot and left in a heap so that when the plot has been dug there will be soil ready to put into the last trench. Alongside the first trench mark out with a line another strip and by standing facing the open trench and working along the line soil can be dug out and thrown well forward into the open trench, at the same time making a new trench. The importance of throwing each spadeful of soil well forward cannot be emphasized too much because a slight discrepancy will after several trenches result in there not being sufficient space in which to work properly. Repeat the method of filling the last trench while making a new one and when the last strip is dug at the other end of the plot the soil heaped there from 2 the first trench is ready to fill the last one.

Manure or compost can be put on the land at the same time and is scattered along the trench and the soil is thrown on to it.

Double digging This is a method of breaking up the soil to a greater depth than in single digging but retaining the topsoil in its relative position. As the name suggests the soil is disturbed to the depth of two spits. Alternative names are half trenching or bastard trenching. The method though difficult to describe is quite straightforward to execute and is really an extension of the process described for digging.

A trench 60cm (2ft) wide and a spade’s depth is taken out across one end of the plot and the soil carried to the far end of the plot and put in a heap. The bottom of the open trench is then forked as deeply as possible and the surface left level. Mark out another area 60cm (2ft) wide alongside the open trench and dig soil out of this to a full spade’s depth and

throw the soil into the open trench and on top of the forked or broken up surface. Thus topsoil remains topsoil but the land is aerated to twice the depth that it is in single digging. If manure is added, and it is a usual practice to do this during double digging, it should be scattered over the forked surface before the topsoil is thrown on thus getting it down a good depth.

Double digging on grassland Where land that has not been cultivated before is being broken up and prepared for crops by hand rather than by mechanical means, double digging is the method recommended. The turf is first skimmed off with a spade over the area of the first strip or trench position, taken to the far end of the plot and left there. Then the topsoil is dug out of the trench to a spade’s depth and also taken to the other end of the plot. The bottom of the trench is forked to a spit’s depth and then the line moved back 60cm (2ft) to mark out the second trench. Skim off the turf from this second trench area, putting it upside down over the forked area of the first trench so that eventually the bottom of the whole trench is lined with inverted turf. Chop up the turf roughly into 10cm (4in) squares with the spade. No manure is added as the turf itself will rot and provide plant food but a general artificial fertilizer may be scattered at this level if required. Then the top spit of soil from the first trench is thrown over the inverted turf, the bottom spit of the second trench forked and turf taken from the third area inverted over that, and so on until the whole area has been broken up. When the last trench to be opened has been forked, put in the turf taken from the first trench, then cover it with the soil from the same trench.

Trenching This is an extension of the method used in half or bastard trenching and if the principle of half trenching has been mastered it is not difficult. Full trenching is heavy work and is often spread over three or four seasons by dealing with a portion of the land only each winter. It is justified in exceptional circumstances only. It can increase the depth of fertility quite quickly but naturally cannot be carried out on some clay or stony soils where the subsoil would be impenetrable with a spade.

The trenches are cut 90cm (3ft) wide for full trenching, to allow better working space. As for half trenching the topsoil from the first trench is removed to the other end of the plot and left there.

There are two methods of dealing with the soil in this opened trench, equally advantageous to cultivation. In the first method, stretch a line along the middle of the opened trench and remove all the
soil on one side of it and put this soil in a heap at the side of the plot quite distinct from the topsoil already removed. The base of the trench is now in the form of a step, the trench depth at one side being two spits deep, about 50cm (20in), and at the other side one spit deep, 25cm (10in). Get down into the lower part of the trench and fork the subsoil, as in half trenching. Stand then on the upper part of the step and working backwards turn this soil over onto the lower half of the step that has just been forked. The fresh strip of subsoil thus exposed is then forked to the full depth of the fork.

Mark out another strip at ground level alongside the original trench and only 45cm (18in) in width. Dig the top spit out, throwing it right forward on to the raised step of the open trench. Turn the second spit on to the forked surface of subsoil in the first trench, then get down into the narrow trench thus cut out and fork the base to a full fork’s depth. The work proceeds in 45cm (18in) strips along the plot and the smaller heap of topsoil is used to fill in the bottom of the last trench and the larger heap of topsoil goes over the last two 45cm (18in) strips.

Deep trenching is a variation of full trenching in which the subsoil is brought on top of topsoil but this practice is drastic and could be disastrous.

Ridging As an alternative on heavy land to ordinary digging, where the surface is left level, the soil can be thrown up in ridges and furrows resembling ploughed land in a method known as ridging, in which a greater surface of soil is exposed to the action of the weather.

The plot to be dug is divided into 90cm (3ft) strips running across it, starting at one corner of the plot. At one end of the first strip take out soil to a depth of 25cm (10 in) (one spade’s depth) and two spade widths and take the soil in a wheelbarrow to the other end of the strip. Then working backwards stand on the soil and dig three spadesful of soil side by side throwing each forward onto the space from which topsoil has been taken. The right-hand spadeful goes forward and slightly towards the center, the next spadeful to the left and slightly towards the center and the third spadeful goes on top of these two. Step backwards and repeat the process and a ridge of soil will be made the length of the strip, the hollow at the end being filled in with the soil taken and reserved from the beginning of the strip. Continue digging in this way forming parallel ridges until the whole area has been dug.