Gardening with Canna or Indian Shot 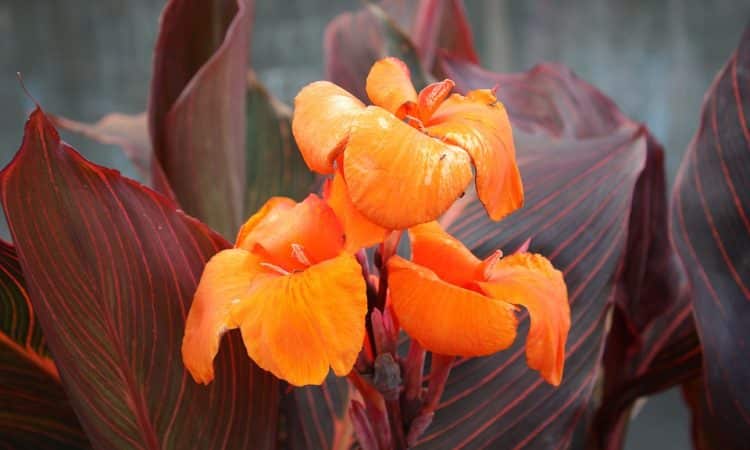 Canna (Can’na). Tender herbaceous perennial plants, from South America and the West Indies, of the family Cannaceae. They have unbranched, stately stems springing from a fleshy rootstock; large, ornamental foliage; and showy gladiolus-like flowers in dense terminal clusters during summer. They are chiefly used in summer beds and borders. The origin of the name is uncertain.

When to Sow Seeds. Cannas can be raised from seeds but this is rarely done except for the pro duction of new varieties. Seeds are sown in a greenhouse with a temperature of 65-70 degrees. January is the best month for sowing if it is desired to produce plants to flower the same season, but seeds may be sown in any month up to June. Before being sown, the seeds, which are very hard, are soaked in tepid water for 24 hours to hasten germination, or they are nicked with a file. They are then set 1/2 in. deep in pots filled with light, sandy soil; the soil must be kept moist. As germination is slow, the number of seeds sown should be noted, so that it may be known when all have germinated. As soon as the seedlings have formed a pair of leaves, they are potted singly in small pots, filled with a compost of equal parts loam and leaf mold, a little well-decayed manure and a scattering of sand. They are then placed in a greenhouse with a temperature of 65-70 degrees and repotted in 5or 6-in. pots when the roots appear through the soil.

Propagation by dividing the rootstock is effected in February or March. The rootstock is carefully cut apart with as much tissue as possible to each growth bud. The divided parts are then planted in sand or very sandy soil and are placed in a greenhouse having a temperature of 70 degrees. They are kept moderately moist. When the new shoots are 4 in. long, each division is potted separately in a 4-in. pot in well-drained, fertile soil and is returned to a warm, moist greenhouse and encouraged to keep growing.

Planting Out of Doors. In May the plants are hardened off by being placed in a cold frame, if they are intended for planting out of doors during the first week in June. They are planted 12-15 in. apart, in ground which has been dug deeply and enriched with decayed manure or compost and fertilizer. There they will flower freely during the summer and early autumn. In warm districts the roots may be left in the open ground during the winter with a sufficient covering of leaves or similar material to prevent them from freezing. Usually, however, they are lifted as soon as the leaves have died down, with as much soil clinging to their roots as possible, and are stored in a frostproof shed or greenhouse covered with fine dry soil. A storage temperature of 45-50 degrees is ideal.

The Chief Kinds. Canna iridiflora is a Peruvian plant, 5-6 ft. tall, which bears rose-colored flowers; C. Warscewiczii from Costa Rica has reddish-purple leaves and reddish flowers; C. glauca, a South American plant, 5-6 ft., has pale green leaves and yellowish flowers. C. flaccida from South America, 2-4 ft., with large yellow flowers, is a parent of many of the modern hy brids.

Economic Uses. The tubers Gf Canna edulis, native of the West Indies, are edible, and from them are produced Canna starch-tous-les-Mois -which is used in the preparation of infant foods. The leaves are used in Brazil for packing purposes. The seed is almost round, black, and so hard that it has been used instead of shot by the West Indians; it. is also used for beads.