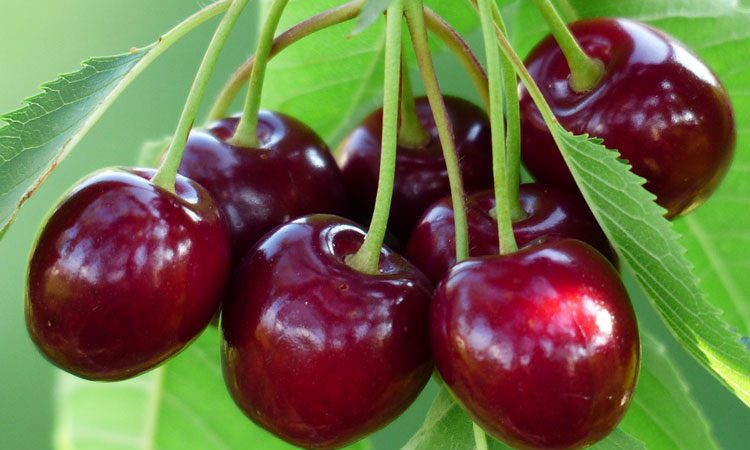 Cherries
Two main groups of cherries are cultivated for the merit of their fruit, the `sweet’, dessert (Prunus avium) and the `sour’, culinary (Prunus cerasus); a third group, the ‘Duke’ cherries, form an intermediate class. The sweets are subdivided into the ‘black’ and ‘white’ varieties. All fruiting cherries are hardy in the British Isles, though the blossom may be damaged by spring frosts.
Named varieties are propagated on to rootstocks by budding in July and August, or by grafting in March, which would be rather unusual. Seedling Gean Mazzard and the clonal Mailing F 12/1 rootstocks are used. Unfortunately, as yet, a dwarfing rootstock is not available and a mature sweet cherry tree may be up to 10m (30ft) tall with a corresponding spread—too large for the average modern garden. Bush Morello (sour) trees rarely exceed a height of 5m (15ft).

Sour cherries do well in almost any situation and are particularly valuable for training as fan trees against a north-facing wall unsuited to other fruits. Although sweet cherries can also be grown as fans, they dislike hard pruning and are happiest as standards or half standards given minimum pruning. Plant standards 10m (30ft) apart, half standards 8m (25ft), bush and fan trees 5m (15ft). Cherries as a class dislike poorly drained, heavy soils. The sweet varieties do well on deep, light to medium loams while the sour ones will tolerate poor soils, provided they are not waterlogged. Lime in the soil is not an essential as is commonly supposed. Morello cherries are self fertile and will pollinate any sweet cherry flowering concurrently.

Most sweet cherries are infertile with their own pollen and often with certain other varieties also. The John Innes Institute has classified the sweets into a number of groups but not with their companions (see table above). It is important to select varieties for interplanting whose blossom period coincides or overlaps. A few varieties called universal donors are compatible with all groups flowering at the same time. The dessert cherry season extends from mid-June to mid-August; culinary kinds are used throughout the year for cooking, bottling and making into jam or cherry ale.

Cultivation Young trees, not exceeding five years old, transplant best. Planting can be carried out at any time from mid-October to mid-March, whenever the soil is sufficiently friable to be worked between the roots.

Excavate a wide hole just deep enough to allow the roots to be covered with 10-13cm (4-5in) of soil. Plant firmly and stake securely. Shorten the previous season’s growth on the leading branches by half, and side shoots to 8cm (3in). In the spring, mulch the soil surface over the root area with composted vegetable refuse or decayed straw. Do not let weeds encroach for the first few years.

Sweet cherries fruit chiefly on the spurs formed freely on the older wood. Pruning consists in maintaining the tree to an open habit with an evenly balanced head, together with the removal of dead, crossing and rubbing branches. This minimal pruning should be confined to the spring and early summer when infection from silver leaf disease is least likely.

Sour cherries fruit on shoots formed the previous season. After the basic fan of branches has been built up by shortening the leaders annually as for sweet cherries, annually replaced side-growths are tied in parallel to the permanent branches. The replacement shoots are selected during May to August—one near the base of a fruiting shoot and another at its tip to draw sap to the fruit; all others are pinched out when quite small. The tip of the terminal shoot itself is pinched out when 8-10cm (3-4in) of growth has been made.

After the cherries have been gathered, the fruited shoots are pruned back at their junction with the selected replacement shoots. The latter are then tied in neatly as before.

Protecting the fruit from bird damage is necessary, using fish nets or rayon spider’s web material on trees of a suitable size, or by bird scaring where trees are too large to net.