How to Grow Raspberries 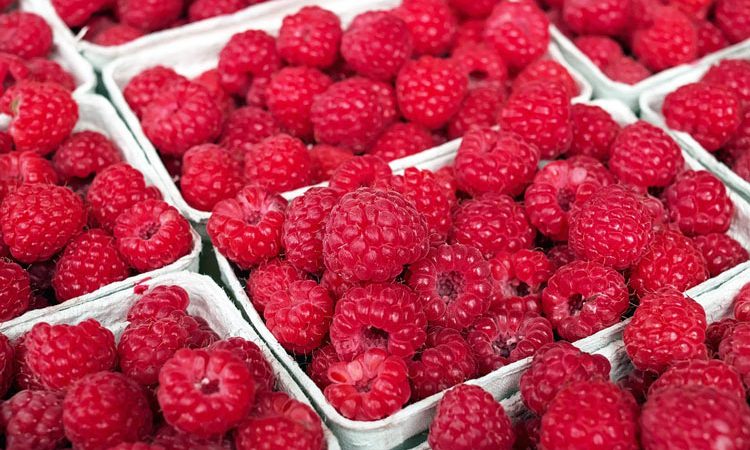 Most raspberries bear red fruit but a few have white or yellow berries. Most ripen in July, some in September or October, and some in either season according to when they are pruned. For varieties fruiting in summer, pruning is carried out immediately picking has finished, the old canes being cut out completely and replaced by the new canes from the perennial rootstock which will then fruit the next year. With autumn-fruiting varieties, the fruited canes are cut back during the dormant season (usually in February) and the new canes which appear in spring will fruit in the autumn of the same year (for individual varieties see table: ‘A selection of raspberries’).

A selection of raspberries

Raspberries are very subject to virus diseases but the health of commercial stocks has been greatly improved in recent years by the scheme of inspection and certification carried out by the Ministry of Agriculture, Fisheries and Food. For this reason, it is particularly important to start by planting only canes obtained from a completely reliable source.

Raspberries do best in full sun but this condition is not always easily provided in a small suburban garden and, if necessary, the fruit will tolerate some slight shade. The most important more acid soil than most. In an alkaline soil, raspberries are seriously affected by iron and manganese deficiency.

Preparing the bed Although a well-drained soil is essential for success, a sandy soil will need to have plenty of organic matter incorporated in preparation. Raspberries need a plentiful supply of moisture throughout the growing season.

It is sound practice to dig over the prospective raspberry bed during the summer prior to planting; taking particular care to pick out the roots of all perennial weeds which may be encountered. Bindweed and couch grass are often a cause of much trouble and, because raspberries are shallow rooters, deep cultivation after planting is inadvisable.

A generous amount of rotted garden compost or farmyard or stable manure should be worked in as digging proceeds -up to 5kg (10lb) per sq. m sq. yd), more on sandy soils. Provided the soil is definitely acid, matured mushroom bed compost may be used with the advantage but this material is slightly alkaline and should, therefore, be avoided if the soil is already neutral or nearly so. To ensure against any possible shortage of phosphates, also dig in a dressing of 28g (1oz) per sq. m sq. yd) of superphosphate.

Feeding the bed After planting the supply of organic matter and plant foods in the soil will be maintained by an annual mulch of farmyard or stable manure at a rate of about 2.5kg (5lb) per sq. m (sq. yd). Where natural manure is unobtainable peat or straw may be used instead to supply organic matter plus a spring dressing of 28g (1oz) of sulphate of ammonia, 28g (1oz) of superphosphate and 14g (0.5oz) of sulphate of potash, per sq. m sq. yd), to provide necessary nutriment. An excess of nitrogen will stimulate the growth of the canes but without any corresponding increase in the crop. A deficiency of potash, on the other hand, will soon show itself in reduced yield. Incidentally, the site, soil and manurial requirements of the raspberry apply equally to all other cane fruits.

Planting Raspberries may be planted either in the open or against a fence or wall. In the latter case, the canes can be secured simply by lengths of strong string tied to staples at the ends of the row and at intervals of 46cm (18in) or so. A freestanding row, however, will require substantial posts at each end of the row and these should be put in before planting. Concrete or angle iron posts make a good permanent job and should be embedded in concrete. Struts should be arranged on the inner sides of the posts to take the strain. Two lengths of gauge 12 or 14 galvanized wire will be required at 0.6m (2ft) and at 1.3m (3ft) from the ground (or 1.6m [5ft] where very vigorous varieties are planted). The canes should be planted 06.m (2ft) apart in the row and, if more than one row is wanted, rows should be 2m (6ft) apart.

Early autumn is the best time to plant but planting is permissible at any time between autumn and spring, always provided the soil is dry enough to be friable and is not frozen. Should the soil be too wet when the canes arrive from the nursery, heel them in temporarily, in as dry a spare spot as may be available.

If they arrive when frost prohibits planting, keep them wrapped up, and store in a cool shed where the roots will not dry out. Plant them or heel them in out of doors as soon as conditions permit. If the roots appear at all dry when planting, soak them in a bucket of water for an hour or so.

Too deep planting is a common error with raspberries: the roots should be covered by no more than 8cm (3in) of soil. If the canes have just arrived from the nursery, it is usually possible to see the old soil mark on the stem, indicating the correct depth. The quickest way to plant a row of raspberries is to take out a shallow trench the width of your spade. As you set the canes in position, spread out the roots evenly and trim off any damaged parts. Replace the soil in the trench, holding each cane erect in turn as the soil is placed over its roots and made firm. When planting as shallowly as this, however, it is unsafe to use one’s heel, as a rammer-gentle pressure with the sole of the boot will be sufficient. Immediately after planting cut back the canes to a height of 0.6m (2ft) and finally lightly rake the soil to break up the surface.

Subsequent pruning In spring, as soon as the growth buds on the raspberry canes may be seen to be swelling, cut back the canes still further-to a visibly live bud about 25cm (10in) above soil level. The idea of this is to leave just sufficient top growth to keep the roots active. No cropping must be permitted the first season and, after this cutting back, new suckers will spring up from the roots and these shoots are the ones, which will fruit, in the second season. Once these new shoots are growing well, the old 25cm (10in) high pieces should be cut down to soil level.

In the second summer, when the fruit has been picked, cut down all the fruited canes right to soil level. New canes now springing up should replace these. If there are more than five or six, select the best of even size, removing any odd extra-vigorous canes and any growing up between the rows at a distance from the main rootstocks. All pruning should at once be burned to prevent the spread of disease or pests.

The new canes should be tied into the horizontal wires individually as they grow.

In the following February, the canes should be tipped, making the cuts to growth buds some 16cm (8in) above the upper wire. This will stimulate better growth lower down where the berries are less liable to suffer wind damage.

Autumn-fruiting varieties should have canes cut out in February and the new growths will then fruit the same year.

Fruit Trees for your garden: